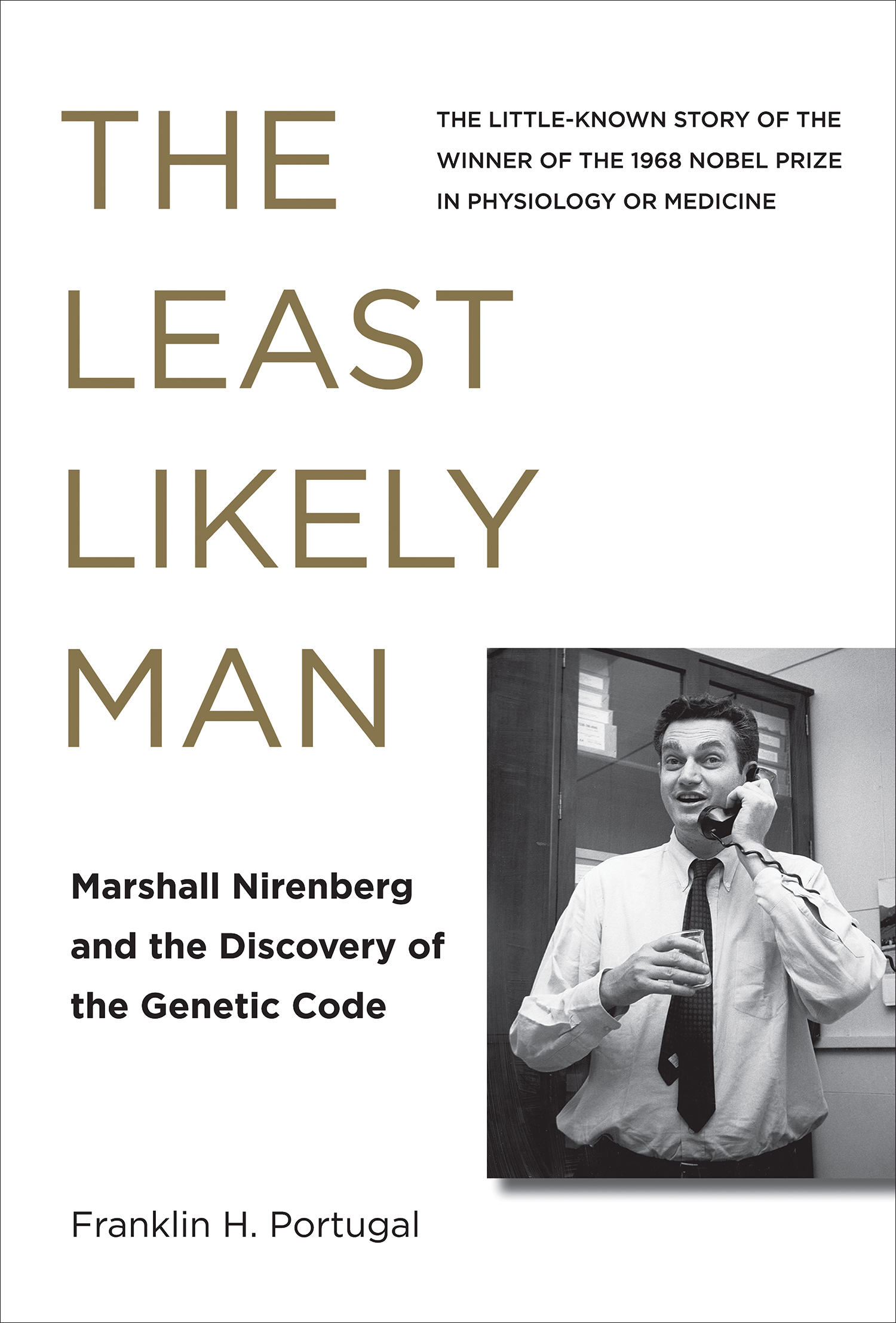 The year was 1968 and Marshall Nirenberg, an unassuming governement scientist working at the National Institutes of Health, had just won the Nobel Prize for cracking the genetic code. Franklin Portugal’s The Least Likely Man tells the story of how Nirenberg beat other world-famous scientists in the race to this important discovery. Franklin Portugal discusses his new book and Nirenberg’s enduring legacy.

Who was Marshall Nirenberg? What was your personal connection to him?

Marshall Nirenberg was a scientist in the federal government who spent his entire career at the National Institutes of Health (NIH) in Bethesda, Maryland. Although modest and unassuming, he profoundly affected the lives of some 150 postdoctoral students including me, who over the years came to his lab to gain research experience. I spent three years in his lab from 1967 to 1970. In 1968, I was present when Marshall shared the Nobel Prize for the discovery of how information is encoded into the chemical structure of DNA.

I have lived almost all my adult life in Maryland close by NIH. That enabled me to stay in touch with Marshall periodically over the years. My last conversation with Marshall took place at his wife’s apartment in New York City five days before he died. At that time, he gave me a note blessing this book project.

Can you describe Nirenberg’s discovery and the controversies surrounding it? What is his legacy in the scientific community?

Marshall discovered how in the chemical structure of a gene, every three building blocks (nucleotides) specifies either a specific amino acid–the building blocks of a protein–or a “punctuation” mark for the synthesis of a particular protein.  “Punctuation” means a signal that either tells protein synthesis to start or to stop.

Like most other human endeavors, science is replete with both cooperation and competition. But the competition that Marshall faced even for science was unusual. I have never heard of a group of 20 very high level scientists forming a club to solve how the genetic code works. This was one of the most important problems in biology in the twentieth-century. Most importantly, the RNA Tie Club, as it was called, refused to allow others such as Marshall working on the same problem to join them.

Marshall spent his first 11 years working on the molecular biology of the code. He spent 40 years more working on the biology of the brain. He made very important contributions to both fields. At least half dozen symposia in his honor have been held in Bethesda and New York. Three alone are slated for this year at NIH and the National Library of Medicine to celebrate the 50th anniversary of his discovery.

What makes Nirenberg’s story a compelling one, one that needed to be told?

Marshall Nirenberg appeared to be an ordinary man who achieved extraordinary success. How does that happen? What can we learn from Marshall’s experiences? Do you have to go to the best schools? Do you have to stand out early on? How can his story help us to achieve more? The unusual degree of competition that Marshall faced adds a great deal of drama to his story.

What can we learn about how science gets done through Nirenberg’s life story?

Marshall kept special notebooks that allowed me to trace and reconstruct exactly how his thinking led to the genetic code. It is unusual for scientists to keep such “idea” notebooks, apart from their laboratory records. So these notebooks are an invaluable record of what led Marshall to the Nobel Prize.  Marshall’s story also exemplifies the best and the worst in science. As such it gives insights into how experimental science gets done. Winners may get a Nobel Prize but losers get heartbreak.

How would you like the book to enlighten or inform readers about Marshall Nirenberg and the process of science in general?

Marshall’s modest demeanor has made him a somewhat obscure figure to students and the general public. In telling Marshall’s story, both his life and his scientific accomplishments, I hope to give readers a better perspective of this extraordinary man. Almost everyone thought of Marshall as a least likely man. What he achieved in science against seemingly overwhelming odds shows what it takes to reach the highest levels. Marshall’s story illustrates how an ordinary man can accomplish extraordinary things.