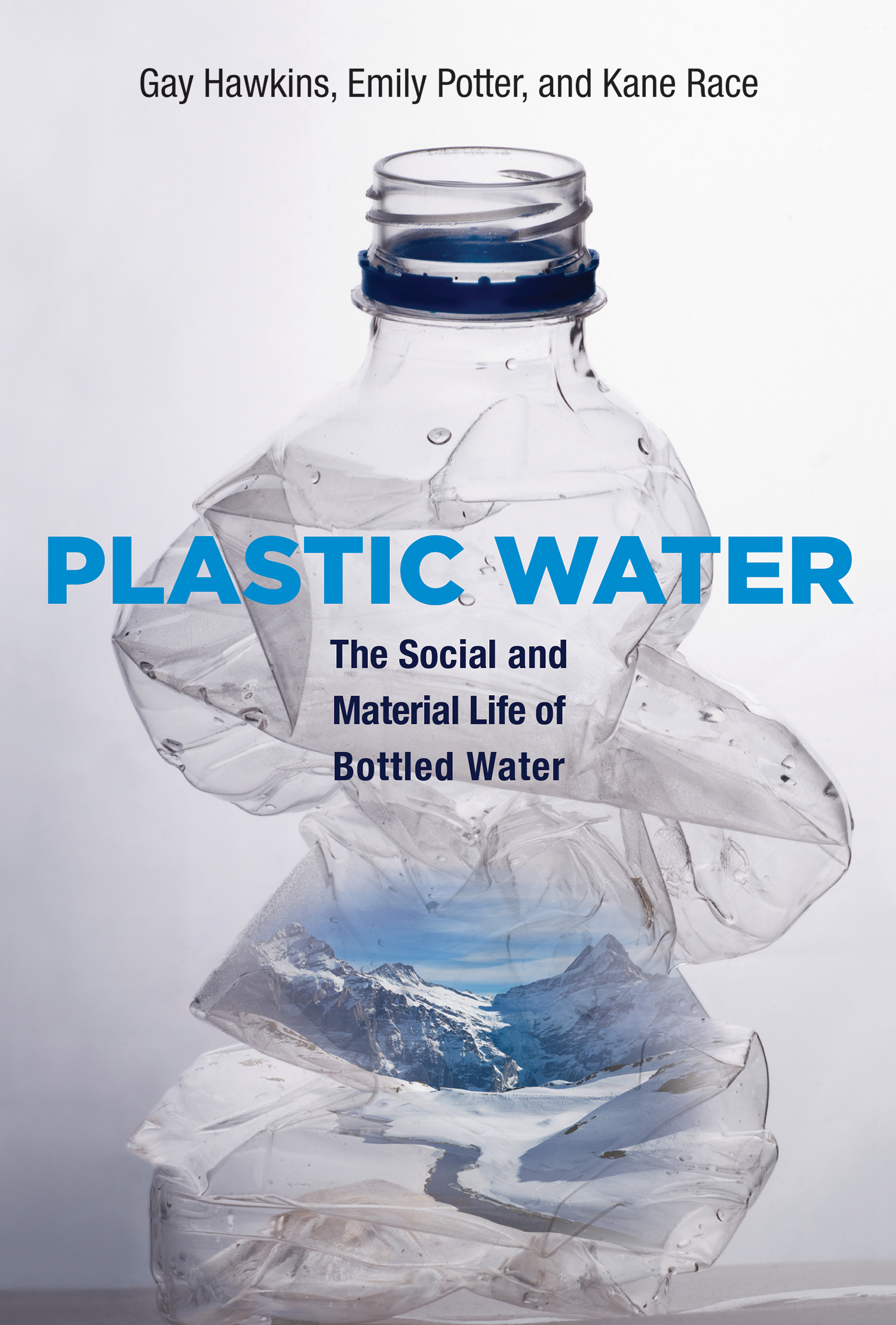 Today’s Five Minutes with the Authors is with Gay Hawkins, Emily Potter, and Kane Race​ who are the authors of Plastic Water: The Social and Material Life of Bottled Water. Their book closely examines plastic bottles from “commodity to rubbish,” and traces their significance in the world.

Plastic Water goes beyond the usual political and environmental critiques of bottled water to investigate its multiplicity, examining a bottle of water’s simultaneous existence as, among other things, a product, a personal health resource, object of boycotts, and part of accumulating waste matter. How do you adapt your theoretical and methodological framework to the multiple meanings and entanglements of your object of research?

When we started looking at bottled water we saw that it was far from a singular or fixed thing. In one setting it might be a product sitting in the fridge of a convenience store, in another a personal accessory jostling around in a handbag next to an iphone and wallet, whilst in another it’s hard waste lying in a gutter. In each of these settings bottled water has a different identity and is helping to enact different realities so it is very hard to generalize. There is no essential identity for the bottle. The minute you accept this then you are acknowledging that bottled water is both mundane and multiple, that it has a presence in its own right, that is has a social life. The challenge for the study, then, was to develop a flexible approach and methods able to capture this complexity. Thanks to an upsurge of interest in objects and materials in many areas of social theory over the last fifteen years there were plenty of theoretical resources available to help us. Central to our project was science and technology studies (STS) which has a very strong focus on the ways in which mundane objects and materials are not passive things furnishing the world of humans but active participants in the organization of particular modes of being or ontologies. In other words, things shape us as much as we shape them. Equally important was the great work done in economic sociology on markets as contingent arrangements. This field has generated some incredibly powerful conceptual tools for understanding how markets are assembled and the role of material and technical devices in this process. The most important thing we learnt from both these approaches was to stick to the bottle. To pay close attention to what it was doing in different situations and to investigate the kinds of actions and relations it helped configure. Mundane things are so often overlooked or pushed into the background in order to let bigger forces and structures claim centre stage in analysis. We refused to do this because we wanted to let the bottle speak and it certainly had plenty to say!

Are some of the many configurations of the bottle more dominant than others?

Most people would think of bottled water as a product or commodity, as something that is produced by large beverage companies and sold as a fast moving consumer good (FMG). However, while this might be the dominant perception it tends to blind us to the ways in which bottled water always exceeds these configurations. The other problem with this is that it tends to pacify the bottle, to reduce it to an instrument for the corporate intentions of Coke or Pepsi. As mentioned above the bottle is multiple, it acquires different identities and capacities in different settings. While beverage corporations would like to ensure that the bottle’s identity as an innocent commodity dominates popular perceptions, they cannot. For example, the minute the water in the bottle is consumed it ceases to be beverage packaging and becomes hard waste, something that needs to be got rid of. This rapid transformation – from commodity to rubbish – points to the realities of what are referred to as ‘market externalities’. That is, the wider social and environmental effects of market processes that are deemed to be outside of market framings. These externalities are what anti bottled water activism has focused on pretty effectively. This activism has challenged the idea of a dominant configuration or identity for the bottle by pointing out its troubling social life once it ceases to be a commodity.

You talk about the emergence of bottled water – the invention of the polyethylene terephthalate (PET) bottle and the rapid growth of mass markets in bottled water – as an event. What does this term imply?

In the book the idea of bottled water as an event works in two registers. Events are things that quite literally happen in progressive time so we wanted to give an account of the history of bottled water markets. The rapid development of these markets is relatively recent so it was important to explain the key elements that made this possible. That said we were not looking for a singular origin or cause, as that is generally a futile exercise. Instead, we sought to explain three significant changes that were necessary to make these markets possible. These were the development of the PET bottle, the general intensification of branding, and the growth of health aware consumers who were concerned about how much water they should drink. When these three elements interacted they didn’t just generate a new market but also some significant social shifts. These wider transformations indicate the second, more philosophical, registers of events as novel developments that generate new, and often surprising, relations between things. PET bottles made water mobile and portable, brands requalified it into something swarming with new values. Terms like  ‘mountain springs’, ‘cloud juice’, ‘all natural’ worked to implicitly devalue water that wasn’t branded like the public supplies coming from taps. And marketing and labeling information about how much you should drink each day medicalised thirst and turned it into ‘daily hydration requirements’. The importance of this dual understanding of the event is that it shows how social change and different relations emerge without recourse reductionism or a single determining force.

You aim to go beyond the assessment that bottles are essentially bad. Would you expand on the positive aspects of bottled water?

Refusing to see bottles as essentially bad means that their effects aren’t intrinsic or fixed but emerge in action. Of course bottled water has positive aspects – it is a valuable source of supply in emergencies when other forms of water are not available. It is better if people reach for a bottle of water rather than sweetened beverages when they want to quench their thirst on the move. But, overall, most of the effects of the bottle we encountered were very troubling. The bottled water industry is contributing to water scarcity in India, it is undermining the role of a safe public water infrastructure in Bangkok, it is generating doubts about the quality of public water in Australia that are completely unfounded, it is contributing to the massive global accumulation of plastics waste – the list goes on. The point is that rather than rush to judgment we wanted to investigate exactly how these troubling effects emerge.

Another aim of the book is to investigate how bottled water has generated numerous “political situations” that sparked anti-bottle campaigns and moral outrage especially in parts of the world where safe water supply is guaranteed and expected. How do you explain why a bottle of water acquired such a bad reputation in some parts of the world when it is normalized and even celebrated in other places?

In chapter 7 we investigate a range of different campaigns that have emerged over the last ten years to oppose bottled water markets. Most of these campaigns are in places where bottled water is seen as an affront to the role and value of mass public water infrastructure. You could say that the rise of new markets in single serve water has provoked a defense of public value and a reassertion of the idea that water is something that should be shared, something that should be part of the commons. In places where safe public water supply is uneven or not established bottled water has a very different reputation. Here bottled water markets are seen as protecting people from the realities of state failure. Buying bottled water is also often read as a marker of an aspirational consumer, as evidence of the ability to provide your own resources for life. In other places such as Mexico bottled water is so normalized as the way in which safe drinking water is accessed that people see no need to protest. In this case bottled water markets have very effectively undermined the struggle for the development of safe state supply. People no longer believe in or trust the state to be able to do this so they have effectively transferred the provision of safe water supply to the beverage companies. Just because there are not campaigns against bottled water does not mean that there are no political situations. Rather, that the politics of water are submerged and lurking about in the shadow realities that bottled water markets create.