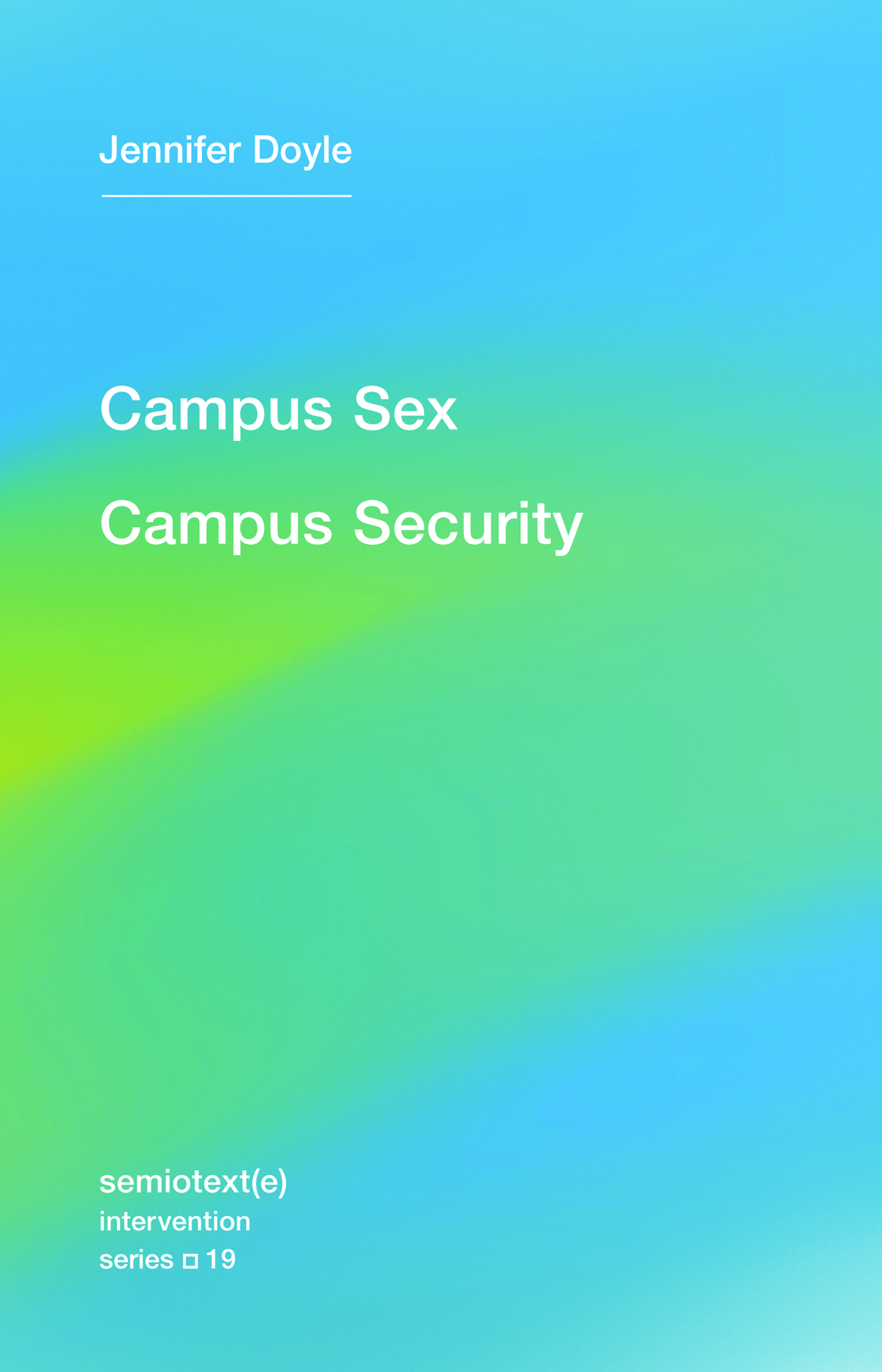 Campus Sex/Campus Security is, for me, an application of the principles of queer theory to the project of critical university studies. This project started as a close reading of the report produced by the University of California’s investigation of the pepper spray incident at UC Davis (“Reynoso Report“). In that report, the administration, when interviewed about why they felt they needed to break up a peaceful demonstration, cited Title IX several times. The Chancellor, in particular, said that she was worried about what might happen if students slept together in tents, with “older men” from “Oakland.” She suggested that if there were an assault on the “very young girls” who attend Davis, then the university might be held responsible—meaning, there might be a lawsuit.

This struck me as very familiar: administrative anxiety—the things the institution itself seems to worry about—has increasingly taken shape around the fear of the consequences of sexual assault for the university. The administration’s nightmares are haunted by lawsuits. That fear, in the case of the UC Davis instance, is anchored in a sense of sexual possibility, which is, in turn, articulated as a penetration fantasy—meaning, a penetration of the campus by “outsiders,” who are, in the language captured by that investigation, implicitly racialized (via references to outsiders from Oakland). I’m thinking, here, of the discourse of the university, as a living institution.

The national anti-rape movement on college campuses is a good thing insofar as it unites students in a fight for sexual wellbeing. But it is not a good thing insofar as it authorizes, on a psychic and an administrative level, the policing of people who appear out of place on a college campus. National media presents the campus as the place where rape happens—even though, according to some studies, people who go to college are less vulnerable to violent crime than people who don’t. This said, the frequency of sexual assault for women under 30 is unacceptable and upsetting, whether those women are in school or not.

Meanwhile, our public culture supports that strip-mining of public education at every single level, and binges on stories of campus shootings and campus rape. These things fuse as a risk management issue. Risk management, on a campus, has a double life—one grounded in a pragmatic approach to the possibilities of harm (and so a campus’s insurance rates go up with every gun campus police officers carry), and another that governs the campus’s psychic life. The two converge around terms like “harassment,” “compliance” and violation. They don’t come together as a smooth narrative—it is more nearly that these combination produces, for the campus community, a lived contradiction.

How would you address the infamous Rolling Stones article “A Rape on Campus” within the context of your book? What does the whole scandal represent?

The journalist and her editors suspended the most basic forms of fact checking in the production of that story. They were too uncomfortable with the subject to take it seriously. It is a pop-news echo of a real problem in the academy.

Faculty and administrators routinely minimize scholarship about sexuality, race and ethnicity—especially where that scholarship challenges patriarchal and liberal notions about these terms. When you have sexists doing peer-review of feminist work, you get very, very bad results. Sexists and racists can’t tell good work from bad work on sex and race. It’s that simple. It’s a real scandal—but it is so endemic, one hardly knows where to start.

Title IX is a linchpin for your book. What exactly is Title IX, and what are its ramifications?

Title IX is a 1972 amendment to the Higher Education Act (HEA). It affirms a student’s right to be free of sex discrimination within the context of federally financed educational programs. Campuses receiving any federal funds must comply with Title IX. In many ways, it mirrors employment law. All the basic protections from discrimination also apply to students.

With sexual assault the question, for the university is a) is it likely that this assault happened and b) what can the school do to protect the welfare of the victim and c) was the school in any way responsible for that fact? This is a very flat-footed way of putting things, but those interlocking concerns are quite different, in some ways, from what a victim is asking for when they file a “Title IX complaint.” (Title IX complaints are handled by the Office of Civil Rights within the Department of Education.) Victims, for example, want to be free from the threat of harm. They don’t want to be forced into contact with the person who hurt them. They want to continue their studies without fear. They want support in their recovery process.

I think things often poorly handled by schools in part because what victims need and what schools understand as their own needs and obligations are not in harmony with each other. It’s a truism that schools are out to “protect themselves.” In a sense, the law actually requires that universities behave that way— they are out to protect their “compliance.” Enforcing a campus’s compliance is not the same thing as advocating for someone who reports an assault. As more and more campuses separate out the work of victim advocacy from the work of Title IX compliance, we should see some improvement on how students are treated.

One of the really confusing things for university communities as a whole, however, is the challenge of understanding the relationship between sexual abuse/violence and discrimination. Title IX applies to sexual violence cases within a campus community because sexual violence is instrumentalized in a sexist system.

In the deeply hierarchal world of a college campus, things can made worse because that hierarchical structure impacts how we relate to each other within the campus community. The further removed from power people are, the more disenfranchised they feel—and may well be—even though federal law applies equally to students, staff, and faculty. You don’t get more federal rights as you get promoted, where protections from bias are concerned. And yet, structurally, on the university campus, this is exactly what it feels like.

And so while I question the popular presentation of the campus as more dangerous for women than the world outside the campus is, I champion the unique set of tools that Title IX offers for students committed to figuring out how we can make the campus into less sexist space. That level of change impacts everyone who goes to school.

Most of the biggest advancements vis-a- vis gender equity within education have been forwarded by students who have filed federal complaints. These are young people who have been through real ordeals. It is humbling that in spite of what they’ve been through, students find the resources within themselves to engage these very large institutions and to force those institutions to change.

I should add: one problem with discourse about Title IX today is that it has really marginalized awareness of employment law within the university context. We hear about Title IX, but how many people know what Title VII is? (Title VII amends the Civil Rights Act, and prohibits discrimination on the basis of sex, race, color, religion and national origin.) Title VII governs my right to be free from discrimination in the workplace; Title IX governs me insofar as it bars me from discriminating against students on the basis of sex/gender—it also, however, protects my right to advocate for a student’s right to equal access to educational opportunity. For example, it protects me from retaliation should I bear witness to a student’s complaint.

There is nothing like suffering from harassment as an employee at a school to give you a lesson in the complexity of these laws, and how they interface with each other.

One of the more illuminating assessments you make in your book is that campuses are spaces where harassment has become administrated, and in which the administrations have evolved into a form of harassment. What do you think might be a way for us to move forward out of this scenario?

I should come about my own experience: I was stalked by a student, and then subjected to an insane set of administrative blunders, which culminated in a hearing in which my scholarship was discussed as evidence supporting the student’s counterclaim, that I “sexualized the classroom.” (The committee supported the student.) All I ever wanted from the campus in the wake of that disaster was a chance to have a conversation with that committee about what they did—which was to pathologize me, as a person, through a sexist and homophobic reading of my scholarship. This has been denied me; the university has gone to great lengths to make sure I never even know the names of the colleagues who did that.

Universities do this to complainants: they shut you out of the conversation. A hornet’s nest of trouble hangs over my head at work. I don’t want that: but I can’t heal my relationship to the campus alone.

Something terrible happens, and a complaint is filed. A finding is reached, and a disciplinary action is taken. But there is currently no thought at all given to what a community must do to restore its integrity after someone has violated that integrity by harassing, assaulting, or discriminating against another person in that community. None. So the campus community, like a dysfunctional family, swallows up these experiences with silence.

Community-based models for restorative/reparative forms of justice, developed largely from within feminist and anti-racist circles (see, for example, the work of Sarah Deer), offer powerful alternatives. These are non-adversarial processes that start from a recognition that these miseries injure not only individuals, but groups of people. They start, too, from the recognition of the relationship between individual experiences of harm, and the systemic problems that reproduce injury, and amplify its effects. Title IX addresses the relationship between an individual case and a systemic problem—this is why, I think, so much is happening on that front. People are trying to make the system work the way it needs to.

Right now, however, many campuses processes masquerade as community-based justice, but are, in fact, profoundly adversarial processes executed without any concern whatsoever for what happens to the involved community beyond the staging of hearings and the writing of reports that get filed away and forgotten.