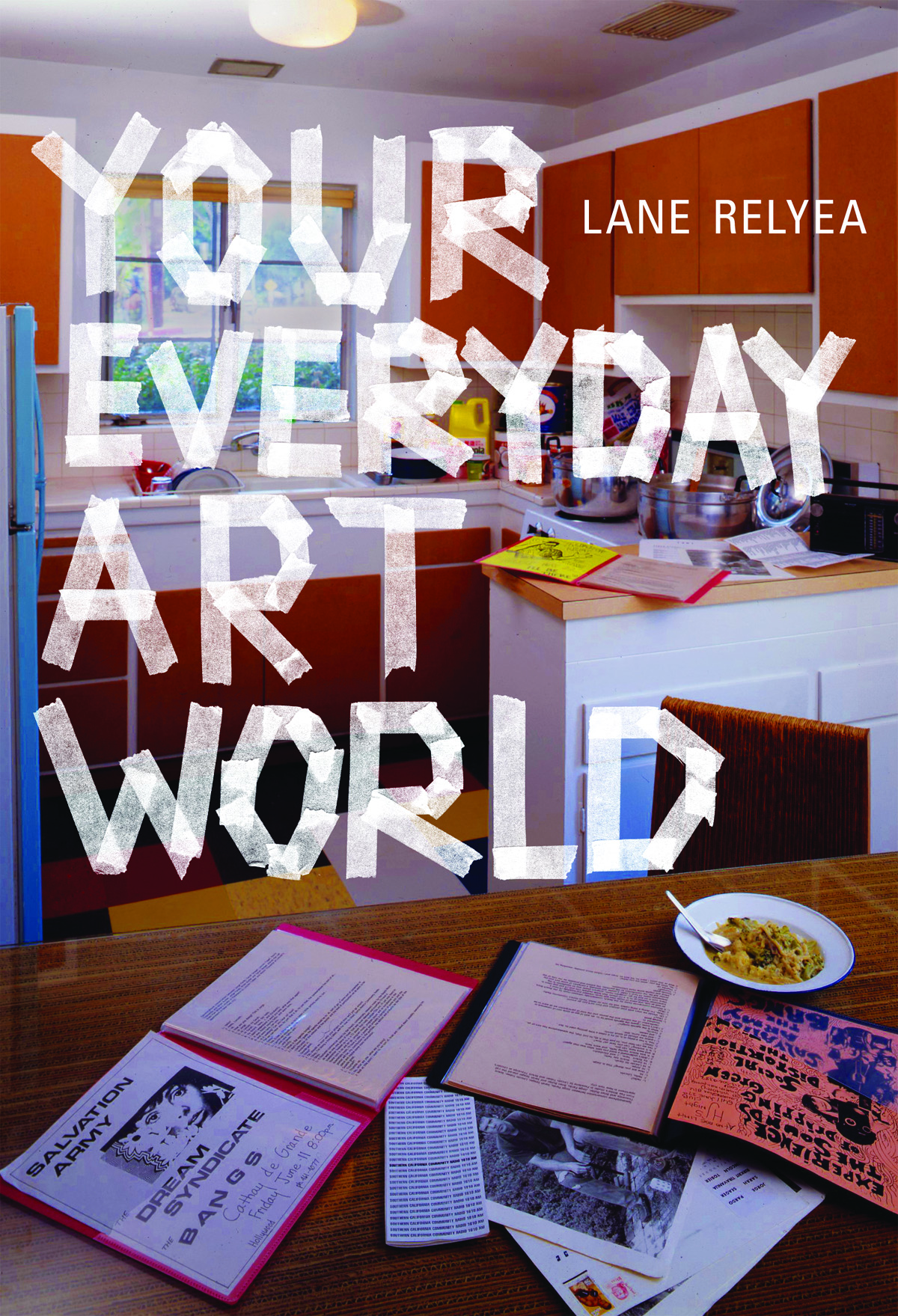 In your book you discuss DIY culture and the move from artists identifying themselves as painters and sculptors to individuals who “make stuff.” If this shift toward continual innovation privileges novelty and originality over the development of a single skill, what does this mean for the future of traditional mediums?

It used to be assumed that, with artistic and other types of labor practices, a much more direct one-to-one relation existed between skill and task (what an artist or other worker has the capacity to do and what their doing actually produces). Traditional artistic skills like painting might stay around (how long who knows) but what I try to stress is that not only does the stable situation of the studio wane in prominence but with it the kinds of dependable routines that allowed a much more direct correspondence between skill and task. As with labor generally in our on-demand, just-in-time world, post-studio practices are much better at applying skills to tasks that are myriad and changing from moment to moment, context to context. In other words, painters will still exist, but more and more they’ll produce not just paintings but parties, magazines, clothing, dinners, performances, graphic design, apartment galleries, blogs, music, etc.

Do today’s artists still strive to make timeless art? And—given that so much of contemporary art is dependent upon the context of the moment—is this achievable?

I’m very suspicious about the notion of timeless art. But I do wonder if, say, painters think about their work as existing in a much more limited time span. When I want to look at what’s going on in painting today more and more I visit blogs, like Josh Abelow’s, that chronicle daily studio visits with jpegs serving as documentation, and the entries get stacked with the most recent on top, so a new canvas appears only to immediately get pushed down into obscurity by the next entry and the next and so on.

Something I actually say in the book is that the category of art is not itself timeless, it’s a particular institution that historically appears at certain times in certain cultures. And beyond that, even our sense of artistic achievement is historically relative—in other words, what is appraised as “good” art will change as the conditions underlying human experience changes, and so because 200 years ago there weren’t TV sets or airplanes or cars or air conditioning we get not Velazquez but Frank Stella. A better constant to track through time is perhaps labor, and with it the dream that art represents of one day transforming labor from being something necessary for survival to being instead a free creative activity undertaken for its own sake.

What do you feel the public loses when artists narrow their focus to the expression of self rather than the exploration and/or reflection of universal themes such as religion, place, etc? What do you think is gained?

It’s true that the artist her or himself has surpassed the art object in importance today. I quote from Luc Boltanski and Eve Chiapello’s New Spirit of Capitalism, their 1999 study of networked and flexible business and labor practices, that “in a world regarded as extremely uncertain and fluctuating, the self is the only element worth the effort of identifying and developing, since it is the only thing that presents itself as even minimally enduring.” But you have to keep in mind that this art worker or subject is no longer sovereign and self-constituting but rather postmodern since it’s always constituted within contexts and groups. Since networks show relative disregard for isolating boundaries, they don’t rely so much on a sovereign Cartesian individual who exercises free rational choice, nor on rigidly defined offices, roles, and duties as in structuralist and functionalist accounts of social organization. The network approach places too much stress on the importance of relations, interaction and feedback to overly isolate individuals from each other or overly circumscribe their interdependence within predetermined rules. So this networked subject no longer fits the liberal humanist definition of the individual who stands equal to all others despite contextual factors like differences in economic and social conditions, but it’s also not the structurally determined subject of Marxism, which often overlooks individualism per-se precisely in favor of economic conditions. Rather than representing the private self or the social totality, this is an actor who is more communicational and simply does things, just in time and on demand, functioning in certain ways depending on the immediate contextual specifications.

The network should, in theory, provide greater democratization by eliminating the need for a defined set of elitist institutions; however, you point out a number of examples where the network breeds new hierarchies—elevating those with the ability to travel constantly and maintain a myriad of “weak-tied” connections. Do you believe the art world can truly be fully inclusive? Should it?

That’s a big question, but maybe one way to approach it is to go back to what I said earlier about art being a certain type of labor, what labor might become when it reaches a surplus, when it’s able to address not just survival but creativity for its own sake. When it becomes not a means to an end but an end in itself. Well, you can think about how our world now produces a whole lot of surplus or excess wealth, only to then have that surplus appropriated by an infinitesimally small fraction of the population. At the same time, our world also produces more and more artists. That is, If not more inclusive the art world is definitely becoming bigger—in the U.S., for example, you can just look at the MFAs produced each year, the number has been growing nonstop, steadily and rapidly, since the 1960s, it never slows despite all the recessions, the defunding of the NEA, with the withdrawal of more local support, etc. And these MFA programs now spread more evenly throughout the country, which means more and more artists now live in communities with no commercial or governmental means to support them. So not just more artists are being produced, but more have to struggle to survive, their creativity narrowed by necessity, their art as surplus folded back into scarcity. And in lieu of galleries and government agencies they turn to community organizing, philanthropy, mutual aid—they rely on crowdsourced micro-support from colleagues offered through mechanisms like fee-based classes and residencies, raffles and limited-edition art sales, and online fundraising tools like Kickstarter. That is, without the possibility of sales or government grants, they turn to networks.

But it’s important to remember that networks don’t inherently oppose unequal distribution of surplus; indeed, the period of their rise has been marked by dramatic increases in all sorts of inequality. You can even argue that, because of their constant fluctuation, networks threaten certain conditions necessary for bringing about social justice, such as the stability and enclosure required for determining collectivities that can be measured by, and held accountable to, the yardstick of across-the-board fairness. That kind of fairness was one of the promises (seldom if ever met) of government funding of social and cultural life—the arts included. Government, at least according to the socialist-democratic ideal, would differ from philanthropic or private patronage in that it would treat surplus as socially rather than individually produced, and would be mandated to redistribute it fairly across the social body. But today there’s so much less government funding available—so that citizens, including gallery-less artists, have to turn to non-government support like networks, which function according to who knows the right people (and the people who know other right people, etc.).

While clearly dependent on technology to maintain the constant communication necessary to network, the art world does not seem to have thoroughly “digitalized” in the way other sectors have. As you point out, one of the requirements for achieving success in the network is the ability to travel almost constantly to ensure one’s participation in the newest project. Do you believe that the art world will continue to digitalize? Perhaps until the point that physical attendance is not necessary to actively participate?

I do talk a lot in the book about the importance of network structures and the elements they rely on, like databases, platforms, projects, and free agents or networkers, to the recent reorganization of the art world away from static enclosures toward connectivity and circulation. But importantly, despite such technological-sounding terms and figures, the reshaping of the contemporary art landscape can’t be reduced to just a matter of particular technologies, which would risk losing sight of other forces, especially neoliberal economic policies whose formulation and implementation are relatively, but significantly, independent of developments in the various technologies they draw on. So therefore I try to separate networking—and communication, even information for that matter—from digitization and other overly technological tropes.

For example, in talking about the rise of information I stress its impact on labor and management practices. The new ideal of labor, including the artistic variety, is communicational and informational—performative, exteriorized, connective and context-dependent, weightless and event-like, immediate and punctual, compliantly modular and easily fragmented, on the spot and just in time. Like information, the individual today also fragments identities and functions across a variety of social situations and work conditions and their different ways of processing and filtering data. Such a subject is produced by and modulates according to immediate contingencies, and is expected (and often can be made) to disappear just as immediately—by management for the laborer; by the museum, gallery, funding agency, college art department, etc., for the artist.