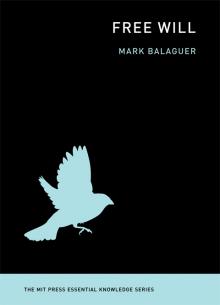 Mark Balaguer, author of the newly released book Free Will from the Essential Knowledge series, answers a few questions on this timeless subject.

Why is free will important to us as humans and something we should think about?

The standard way to answer this question is to say that free will is important for moral and legal reasons. If human beings don’t have free will, then no one is ever morally responsible for anything they do. We want to be able to say that Hitler was a moral monster and that he was morally responsible for his actions. But if he didn’t have free will, then he didn’t have any genuine choice about what he did, and if that’s true, then it’s hard to see how what he did was his fault, and it’s hard to see how we can blame him for it. Moreover, if we can’t justifiably blame criminals for their actions, then it’s hard to see how we can justify the practice of incarcerating them—it’s hard to see how we could rationally maintain that criminals deserve to be punished. Now, this might all be true, but I’m inclined to think that if we discovered knockdown evidence for the claim that human beings don’t have free will, we wouldn’t change anything about our moral or legal practices. So I think that these moral reasons for caring about the issue of free will are a little exaggerated by some people. But I’m inclined to think that there’s a more immediate reason that the topic of free will is important to us. It’s important because we want free will. The idea that we don’t have free will—that we might just be puppets or physical machines with no genuine choice about what we do—is extremely depressing. We want it to be the case that we do have free will, and this, I think, is why the question of free will is interesting and important to us.

What do you consider to be the most convincing argument against free will? Why do you think this line of reasoning ultimately fails?

Well, I think the most worrying argument is the one based on the claim that there is good evidence from the empirical sciences (most notably from psychology and neuroscience) for thinking that all of our decisions are completely caused by prior unconscious events—that is, by events that occur prior to our conscious choices and that we’re entirely unaware of. Why this argument fails is a long story. In short, I don’t think that any of the relevant scientific studies ultimately succeed in showing what they’re supposed to show. In other words, I don’t think they show that our decisions are actually caused by prior events that we’re not aware of. But the story goes differently in each of the different cases. For each of the relevant scientific studies, we need to look carefully at the various issues and explain why the anti-free-will conclusion doesn’t follow. That is, we need to explain why the given study doesn’t succeed in showing that our decisions are caused by prior unconscious events. This is in large measure what my book is about—showing that these science-based anti-free-will arguments don’t ultimately work.

What do you consider to be the most convincing argument, if any, in favor of free will?

In the end, I don’t think there are any very good arguments for free will. Probably the best argument is based on introspection—it just feels to us that we have free will. At any given moment, it feels for all the world that we have multiple options available to us for what we could do next, and there doesn’t seem to us that there’s anything forcing us to choose any of the available options—in other words, it seems to us that we have a genuine choice as to which course of action we pursue. But I don’t think these sorts of considerations carry much weight. The problem is that these feelings and seemings could all be illusory. It seems that I can do multiple things right now, but for all I know, it could be that what I do next will be completely caused by unconscious neural events in my brain. If so, then how things seem to me—the fact that if feels like I have free will—would be an illusion. And the problem is that, in my opinion, we don’t have any very good reason to believe that our feelings of free will aren’t illusory in this way. In other words, we don’t have any good reason to think that our decisions aren’t actually caused by unconscious brain events that occur prior to our conscious choices. That’s the bad news. But the good news is that we also don’t have any reason to think that our decisions are caused by prior events in this way. That’s what I argue in my book—that the various reasons people have given for thinking that our decisions are entirely caused by prior events aren’t good reasons. Thus, if I’m right, then the question of whether we have free will is completely open. Maybe we have it, and maybe we don’t. But as of right now, we don’t have any good reason for believing either answer to the question.

What are the limitations of science in settling the determinism vs. free will debate?