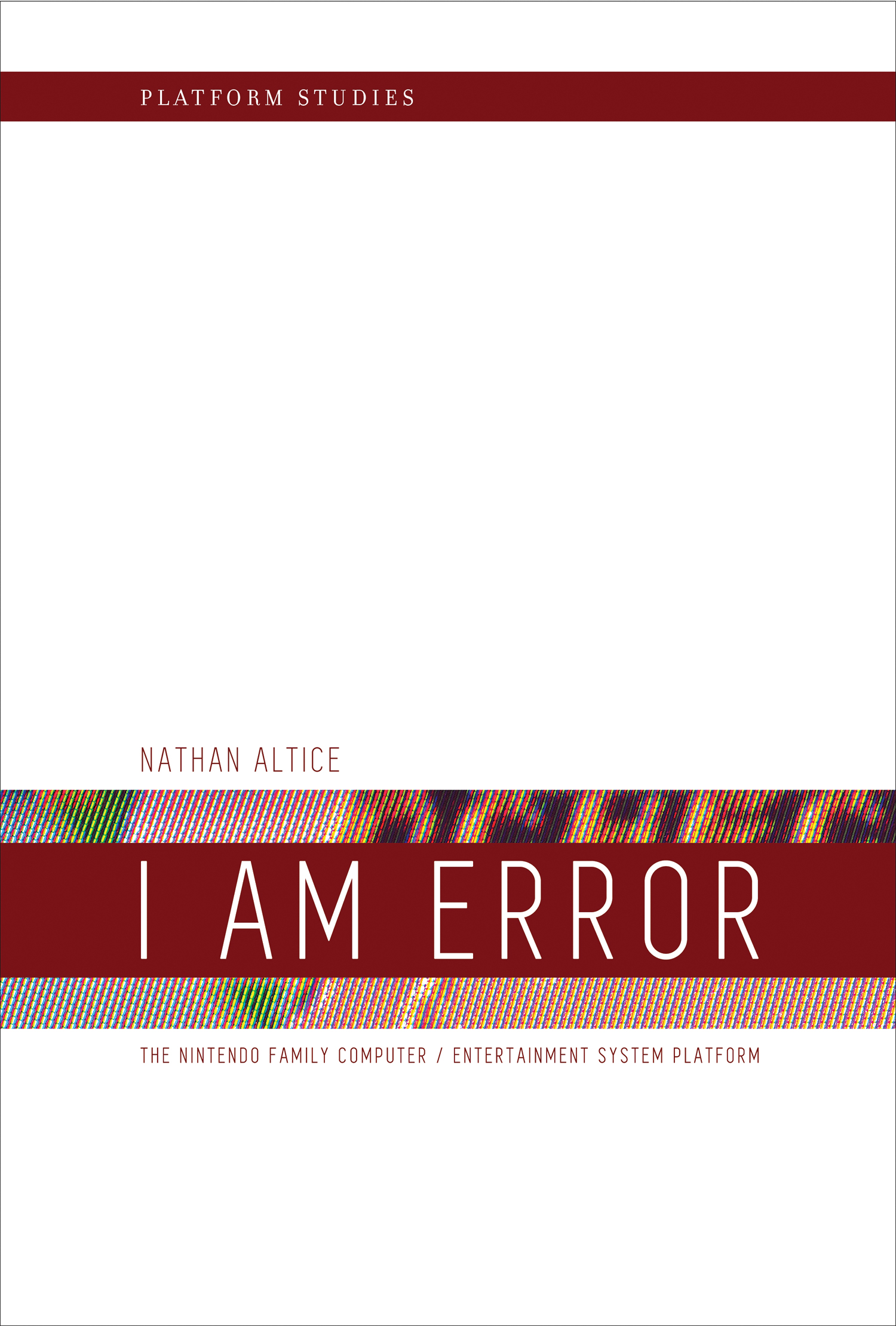 Nathan Altice, author of recently published I AM ERROR: The Nintendo Family Computer / Entertainment System Platform discusses his book and the legacy of Satoru Iwata.

What is the story behind the title of the book? How can we understand Nintendo Entertainment System (NES) through the process of translation and mistranslation?

I AM ERROR (the all-caps are important) is an infamous snippet of dialog from the NES game Zelda II. Early in his adventure, protagonist Link wanders into the house of a portly elven fellow who utters, ‘I AM ERROR’ incessantly until you trigger an event that opens further dialog. In the NES era, the phrase had a mythological import—what did he mean? Had something gone wrong? Had the game surfaced a diagnostic message in place of dialog? The real, more mundane, reason was that the phrase was a poorly-localized snippet of text translated from Japanese to English. It was an accurate, albeit far too literal, translation of, ‘My name is Error.’ Error, it turns out, had a twin named Bug, and both names were programmer jokes.

Though the mistranslation has been well-known for years, the mystery still circulates online, in meme form, and as part of the NES’s cultural legacy. Even today, there are Twitter bots devoted to churning out I AM ERROR in perpetuity. And I chose the phrase as the title before I’d written a word of the book, because I knew it encapsulated important cultural, social, and technological aspects of the platform. The NES was defined as much by its errors and breakdowns—blinking screens, flickering sprites, in-game slowdown, blowing in cartridges—as by its successes. And these were all byproducts of the platform’s unique configuration of hardware affordances.

Linguistically, I AM ERROR also marked an important expansion point in Nintendo’s history. Japan companies had certainly made inroads during the arcade era, but the NES was a turning point in the videogame industry, a moment when a Japanese company suddenly dominated the attention of millions of American households.

What is NES’s importance to videogame history and to culture at large?

There are many, from its design legacies to its influence on popular music, but historically, the NES is important for reviving the American videogame console industry. In the early 80s, the arcade and console market were in a death spiral, and the media were pronouncing the death of videogames, claiming that multi-purpose PCs would supplant dedicated game machines. (This wasn’t the case outside the U.S., though many videogame histories extrapolate the trend to a worldwide phenomenon.)

Nintendo’s Family Computer (or Famicom) had proven to be a success domestically, and they wanted to bring their console to the larger U.S. market. But retailers and buyers said ‘no’ to any machine with any hint of ‘videogames’ in its product description. So Nintendo went through a series of Famicom redesigns, ditching the toy-like colors and form for a monochrome, VCR-like ‘entertainment system’ that hid its cartridges in a toaster-like spring-loaded tray. Cartridges were rebranded as ‘game paks’ and a novel ‘robotic buddy’ was added to the package to appeal to toy sellers. It took a lot of hard promotional and marketing work, but the gamble paid off. The NES, buoyed by the software phenomenon known as Super Mario Bros., kickstarted the console videogame industry and established Nintendo as a dominant player.

What do you hope readers will gain from reading your book, I AM ERROR?

I hope that readers who feel like they know all about the NES’s history (or feel nostalgic for the system because they grew up playing it) learn more about its technical underpinnings. I hope NES hobbyists who feel like they understand the NES at a technical level learn more about the ways a platform can shape larger cultural or historical trends in the software industry. I hope game designers find inspiration from the extreme constraints NES programmers were under while designing remarkable games. And I hope readers who were too young to experience the NES firsthand are inspired to seek out the console and explore its library.

Satoru Iwata, chief executive of Nintendo, passed away this month. What will be his legacy in the videogame world?

It’s hard to say what his legacy will be, but Iwata was unique as a President who understood the videogame industry at nearly every level. He began his career as a talented programmer at HAL, one of Nintendo’s close ‘second-party’ partners, and designed Balloon Fight, one of the best early NES arcade-style games (with a clever sub-pixel positioning system). By all accounts, he was a generous, genuine President who cared deeply for his company and customers. The Iwata era of Nintendo marked a more open Nintendo, similar to Tim Cook’s tenure following Steve Jobs’s death. Nintendo seem more keen to share their history and open dialog with fans and scholars alike (though they are still, like Apple, more secretive than most companies). So losing Iwata is like losing a fundamental part of Nintendo’s early history, one than stretches from the Famicom’s birth in the early 80s to the modern era of the Wii U. His will be a difficult role to fill.