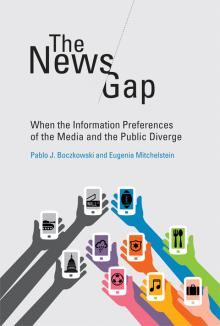 Pablo Boczkowski and Eugenia Mitchelstein, authors of The News Gap, answer questions about their book, media trends in the U.S., and news consumption during a recent political scandal:

Briefly define what you mean by the “news gap.” What are some of the factors that create and affect this “gap”?

Journalists at leading news organizations select as most newsworthy stories about politics, business, and international topics. In contrast, news consumers most often choose articles about sports, weather, entertainment and crime. A sizable supply-demand gap in news content results from these divergent thematic choices. We´ve examined more than 50,000 stories from 20 leading news sites in seven countries across the Americas and Western Europe and we found that, on average, there is a 18 percentage-point gap between the percentage of public affairs stories in journalists´ choices and in the most read articles.  This gap exists regardless of ideological orientation of the news organizations or national media culture, and it is not affected by innovations in Web-native forms of storytelling such as blogs and user-generated content on mainstream news sites.  However, it narrows in times of heightened political activity (including presidential elections or government crises) as audiences feel compelled to inform themselves about public affairs.

Although the gap may have existed for a long time, it means something different in the current scenario than in the past. Before, the leading media organizations in print, radio, and television operated with very little competition. Competition has increased greatly in the past decade, which has increasingly made the stance of giving the public what they need— even if that is not what they want— a luxury for media organizations that see their bottom lines in peril . Moreover, in the past, newsroom staffers had a distant and fairly abstract sense that consumers weren’t very interested in public-affairs news. Today, disregard for consumers´ preferences is more difficult to enact, due to the use of tools such as Chartbeat and Analytics in the online newsroom, which allow journalists to follow consumers´ preferences on a real time basis. Finally, for news audiences, avoidance of public affairs topics was more difficult to enact in the past, due to the limited range of choices available and the linearity of news presentation. In the contemporary setting, a greater number of choices and an increased ease in unbundling news products allow consumers to select only the content they are interested in, which tends to be about non-public-affairs topics.

In your research for the book, did you discover any news media and consumer trends that are unique to the United States?

The gap exists across all media examined during routine times. However, in the United States we found the only case in which the gap was reversed: on the site of the Washington Post, during a period of heightened political activity (the 2008 presidential campaign), consumers selected 12 percentage points more public-affairs topics than journalists. This suggests Washingtonpost.com might be a niche news organization, catering to a specific subset of the population highly interested in political news during an electoral year. However, this changed drastically year later, mostly due to changes in the choices of consumers, restoring the gap to its usual configuration of a greater prevalence of public affairs news among the most newsworthy than among the most clicked stories. On a related vein, another interesting finding was that, during the 2008 campaign, the gap on the site of Fox News was actually larger than during the comparatively more routine period of political activity in 2009 (50 percentage points during the earlier period compared to 39 percentage points during the latter period). This could be because Fox News audiences, who tend to hold a conservative ideology, were not interested in following news about the Barack Obama´s likely victorious march towards the Presidency.

You use the 2008 U.S. presidential election as a case study, and extend your analysis to the 2012 re-election of Barack Obama. What makes elections good phenomena to examine in the context of your thesis?

Elections are excellent opportunities to examine contextual changes in the gap. Analyzing not only presidential elections, but also a mid-term election (2010) and the years in between them (2009 and 2011) allowed us to show that the gap varied in size quite predictably and in a cyclical manner, exhibiting an inverse relationship with the ups and downs of the sociopolitical context. On the five news sites we included in the five-year study (CNN, ABC, CBS, Washington Post and USA Today), the average gap was only 5 percentage points in 2008 (the first presidential election in 56 years in which neither an incumbent president nor a vice-president ran for office) and 7 in 2012, rose to double-digits (13 percentage points) in the mid-term election, and increased substantially during the non-election years (20 and and 23 percentage points in 2009 and 2011, respectively).

What do you make of the recent media coverage and news consumerism of the Chris Christie bridge scandal story?

The Chris Christie bridge story is a perfect example of what happens when an unexpected political event draws consumers´ attentions. For a short while, while the story unfolded, consumers were more interested in public-affairs stories in general and in that topic in particular. However, as no new major developments appeared, audiences tended to go back to their regular media diet. For instance, while on January 20th every one of the ten most prominently placed stories on the homepage of the Washington Post was about public-affairs topics (including allegation that Christie had pressured New Jersey mayors to support him), only one of the most read articles was about public affairs, while the remaining articles were about topics such as sports and weather. This is highly consistent with the findings that we presented in our book.