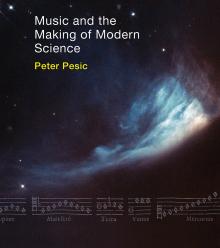 In our latest “Five Minutes” post, Peter Pesic, the author of Music and the Making of Modern Science answers our questions. His book makes the argument that music was vital for the development of modern day science.

Your book begins with the ancient Greeks. Why are they important to your argument that studying music brought advancements in modern science?

Western science began in ancient Greece, where the Pythagoreans discovered in music the first experiments that connected the realms of number and of physical experience on earth, as astronomy connected number with planetary motions in the heavens. That beginning was all-important because it set Western science on its path of understanding and shaping the world through mathematics.

What is the quadrivium?

Literally, it means the “four-fold path,” the unified study of arithmetic, geometry, music, and astronomy that began with the Pythagoreans and that Plato argued should be the basis for higher or “liberal” education. In my book, I argue that modern science is the “child” of these four sisters, connecting number with the visible world in many ways.

You say, “René Descartes pioneered the “new philosophy” through his achievements in mathematics, natural science, and metaphysics, yet his work in music has remained relatively unknown.” What is his work on music, and how much of it influenced the making of modern science?

Descartes’s very first writing (at age twenty-one, as a gentleman-soldier) was a little Compendium of Music he wrote for Isaac Beeckman, a friend with whom he shared many scientific interests. In it, Descartes treated music as a test case for what would become his project to “accurately join mathematics and physics.” Though this little treatise was only circulated among a small circle of friends, it was the first step in Descartes’s innovative project, which developed into the beginnings of mathematical physics. His letters to his friends show how persistently he interwove musical and physical questions.

In the popular TV show Breaking Bad, Walter White chooses Heisenberg as his pseudonym, after the physicist Werner Heisenberg—whom you mention in your book. How did music influence his work in physics?

Heisenberg, like many scientists of his generation, was passionate about music and played the piano seriously. He recalled that hearing a performance of Bach’s Chaconne for solo violin revealed to him “my link with the center” and led ultimately to his decision to study physics. But by his time, the musical concepts that had been more easily discerned in the work of Kepler, Newton, Euler, Young, and Helmholtz had generally been incorporated deep within the structure of science as integral parts of its concepts and methods. So there is no clear musical influence that one can trace explicitly in Heisenberg’s own scientific work. On the other hand, though Erwin Schrödinger disliked music, he found himself using the musical terminology of vibrations and overtones as he expressed the structure of his wave mechanics. And Max Planck spent a formative year experimenting with harmoniums and choruses before he turned to the problems of black body radiation that led him to the quantum.

Your book has a companion iBook. Can you explain some of the enhancements that were added to this version?

I think the iBook version is the most exciting and innovative aspect of this project: you can hear and see its sound examples just by touching or clicking. Thanks to Alexei Pesic’s technical wizardry, readers now have a far more direct and immediate access to sound and music than ever before. I hope this new technology will revolutionize how people encounter music though an integrated experience of text, sound, and score.

Bonus: Check out some of the sound examples on the book’s home page.