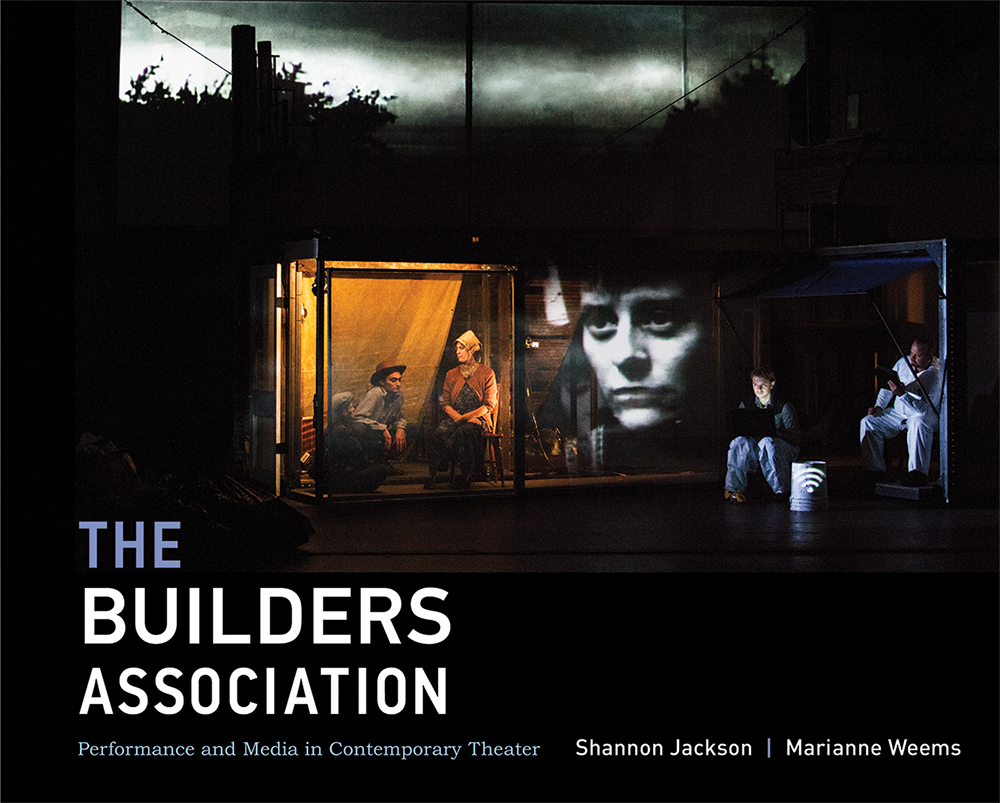 Shannon Jackson, the Director of Arts Research Center at the University of California, Berkeley and Marianne Weems the Artistic Director of The Builders Association performance group join us for our latest “five minutes with the author”, discussing their book The Builders Association. The book details the performance history of the award-winning group.

The Builders Association is an award-winning New York-based intermedia performance company founded in 1994. The company is famous for putting backstage technology in the foreground, making it visible and open for critique. Would you give us an example of this practice?

(Marianne Weems): Our production Super Vision (2005) tackled the theme of dataveillance and the growing awareness that a “databody”. At the beginning of the show, a performer delivered a real-time demographic analysis of that night’s audience, highlighting which economic class was sitting in which section of the theater. She pointed out that the biggest breadwinners occupy the more expensive seats in the orchestra, and the highest seats in the balcony are generally occupied by the 99%, and provoked the audience to consider their data trail even before the show has begun. This demographic breakdown was generated nightly by processing the zip codes of ticket buyers with a commercial market research tool, something that is done to each of us many times daily, but is rarely “staged” in the theater. This approach has carried forward throughout our work, the aim has been to creatively represent the economic, political, and technological forces which affect us daily—to “make the invisible visible” through the creative potential of multimedia theater.

Due to the use of media and technology in performances, the Builders Association has been celebrated for bringing theater into the future. But in the book, you stress that theater, going back to the deus ex machina in ancient Greece, is an ongoing reflection of the history of technology. Do you think of the Builders Association as the quintessence of future theater – or as a continuation of theater’s long history of technology incorporation?

(Marianne Weems): Our book traces many connections between “old” and “new” intermedia performance, and challenges the concept that any artist or practice can spring from an ahistoric context.  The long continuum of spectacular theater technologies is acknowledged and celebrated in the Builders’ work.

Most explicitly, our 2001 production XTRAVANGANZA looked back at theatrical forms which preceded much of what is now called multimedia performance.  Extravaganzas of the mid-19th and early 20th centuries were large-scale presentations which combined live performance, music, dance, and later film in a variety show which was based on the visually spectacular nature of each “act.” XTRAVAGANZA celebrated the epic pageants of Steele MacKaye, the technical wizardry of “The Electricity Fairy” Loie Fuller, the lavish stage-scapes of Florenz Ziegfeld and the spectacularization of cinema that accompanied Busy Berkeley’s move from stage to screen.

You say that “If the feeling of volitional mobility characterizes the digital world, then theater’s anachronistic territoriality might be the most interesting thing about its operating systems in our contemporary moment.” Would you expand on this?

(Shannon Jackson): As I wrote in my Introduction, a Builders show juxtaposes an apparently unfettered, though occasionally pixilated world of electronic connection with the highly fettered space of the theatre, where the actor onstage has been obligated to show up at a certain time. I find this juxtaposition compelling because it exposes a tendency to position the digital world as apparently noncontingent, as seamless or unencumbered, and in opposition to theatre which is dependent on its casts of performers, crews, props and schedules, what I call the “inconvenient heteronomy” of theatre.

These relationships expose how immaterial economies can’t exist without the materiality of servicing bodies, and how experiences of seamlessness depend on labor that’s tethered and encumbered.

We also see this in the way technology is a central character in the Builders type of theatre, an essential part of the argument of every piece, yet by insisting on a certain location or place where people gather to watch their performances, the locus of Builders shows, their work is also anachronistic, or belonging to analog time. This is a generative friction, and makes their work both bracing and provocative.

About the term “operating systems:” when we were designing the book and thinking about the depth of research that goes into every Builders show, we decided to cluster different kinds of information under rubrics such as “R&D,” “Operating Systems,” or “Storyboard.” We were looking for terms that cross the fields of technology, arts, and humanities to give readers a sense of theatre-making as a process of construction. “Operating Systems” was apt because it refers to both infrastructures inside of computers as well as wider structures or rubrics.

The book tracks The Builders Associations oeuvre from its earliest performance in 1994 to it most recent tour. But the book is more than that: Another aim is to expand the current discourse on new media performance by dismantling pre-branded frameworks like the live/mediated binary. How can this change in language advance our understanding of contemporary theater?

(Shannon Jackson): The live/mediated binary can occlude awareness of the reciprocity and interdependence of performance and technology. As I researched The Builders Association I not only found myself embroiled in storage systems and recording processes that seemed to contrast with the live and ephemeral processes that propel the act of performance, but also grew increasingly aware of the history of technology that is embedded in the history of theatre. Indeed, it becomes impossible to polarize the live purity of performance with the mediatized impurity of technology. By widening our lens on genealogies of theatre we also notice how categories and language can limit our views of “contemporary” theatre.

What I find especially interesting about The Builders Association is that they are billed as a “new media” performance group, yet what’s really striking is how much of their theatre is about investigating “old media.” In a climate where we wonder and worry about new media evacuating the essence of our art forms, the Builders recognize that technology has been embedded into the deep history of theatre—and embedded into all art forms—for centuries.

A change in language affords different perspectives and foregrounds different elements: I hope that readers come to an understanding of the arguments of their pieces, as well as the aesthetics of their pieces. The Builders do deep research on every topic, whether it is ethnographic work, archival work, or secondary literature reading. They also think very imaginatively about technology and new media systems as artistic forms; they are a theater company that uses new technology but that also provokes reflection and debate about the role of technology in our lives, and the theater turns out to be a great place to do that kind of exploration.

The epilogue of the book is entitled Mediaturgy. How do you define this neologism and how does it relate to the Builders Association?

(Marianne Weems): In my view, a performance should not include technology for technology’s sake, but should incorporate media to deeply reflect the issues, questions, and stories of modern life. As dramaturg for the experimental theater company The Wooster Group I had the valuable experience of shepherding diverse content towards a coherent central theme.  My experience as a director of intermedia theater calls for a similar effort:  to bring video, sound and scenography into line with the concept behind of the performance. The aim is for the form to express and magnify the content in every way.