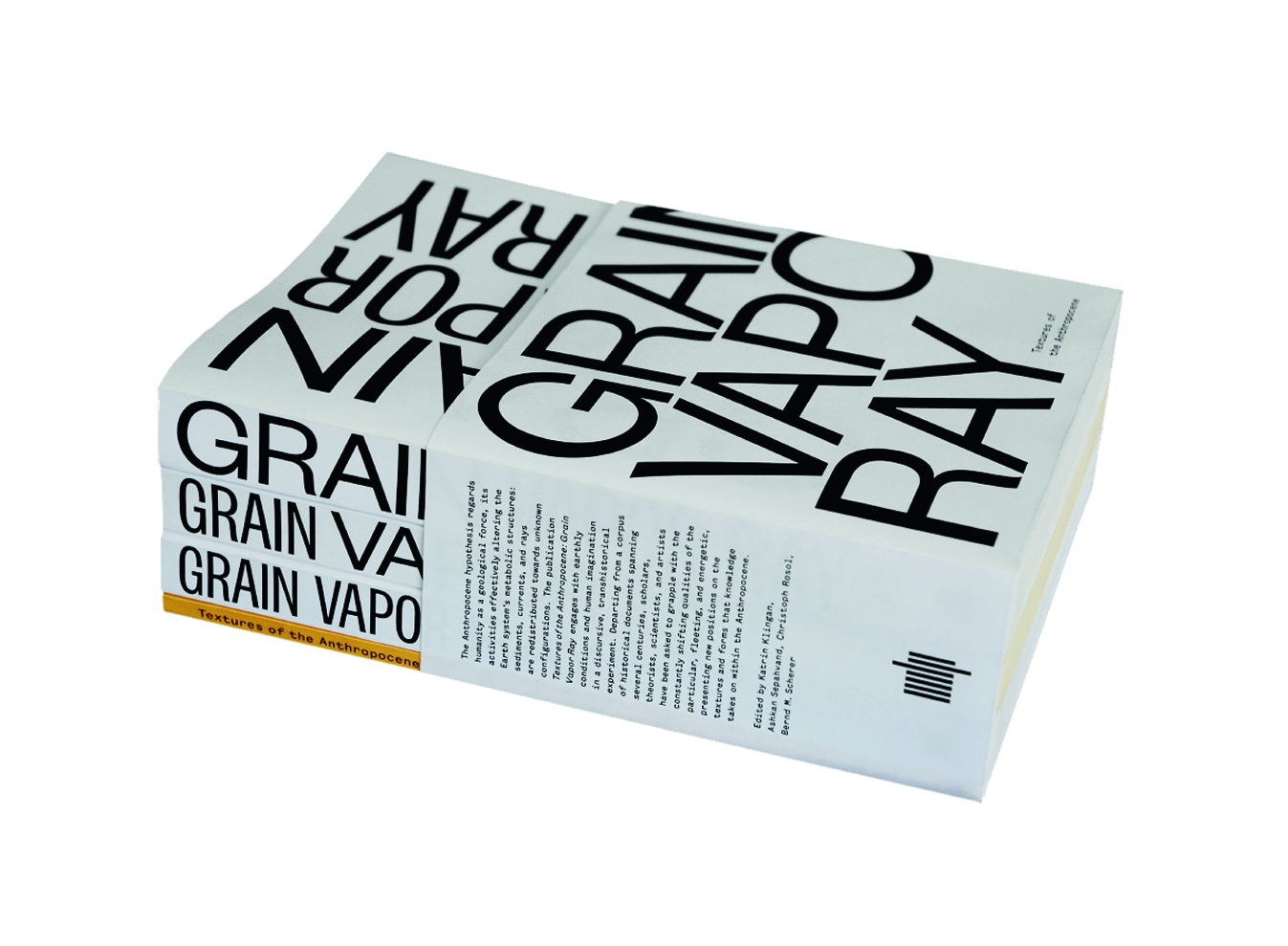 Today the editors of  Textures of the Anthropocene: Grain Vapor Ray, a four-volume set of writings that examine the era of human-controlled nature from a variety of perspectives, answer questions about their book.

What does “Anthropocene” mean, and why is this idea important for the future of our world?

We inhabit “a world of our making, but not of our choice“, as George Monbiot recently put it in the British Guardian. This statement hits the core of the Anthropocene hypothesis. Human and terrestrial processes have always been inextricably entangled. Yet only now, when our impact has reached planetary proportions so that we can speak of a “geological age of humankind” do we find ourselves immersed within their (unintentional) consequences.

We have reached a tipping point, a conjuncture that does not merely consist in the fact that climate change is approaching a point where it becomes self-reinforcing, or that species extinction and species invention accelerate. Over the last centuries, humankind has put physical processes in motion leading to developments for which we no longer have any standards by which to judge them. When humankind itself becomes a natural force—or that which we have understood to be nature is now made by humans—then dualisms such as nature/culture or subject/object no longer function in the accustomed fashion. With the traditional methods of knowledge acquisition—the natural sciences on the one side and the humanities on the other—humankind has reached a limit. The indivisible concatenation of industrial metabolism, climate change, urbanization, soil erosion, and the alteration of the nitrogen cycle, as well as a new social (self-)consciousness, have shown that the rapid reformation of cause and effect, means and end, and quality and quantity requires a new approach to the world which is not governed by postmodern discourse but by material interconnections and processes. A new sense of amazement at the wonder of the Earth is required: what can we do and how can we know—and to what extent are these two questions connected? With what means, methods, and senses can we encounter the world of our own creation?

Why did you choose to explore the concept of the Anthropocene in terms of these three “textures” – grain, vapor, and ray?

With “Grain,” “Vapor,” and “Ray” our intention is to experiment with a set of specific textures that relate back to the fundamental material processes that constitute our earthly condition. They compose the “mud” in which we humans find ourselves. The notion of the mud is meant figuratively—speaking to the uncertain and turbid situation in which our politics, theoretical frameworks, and clear-cut dichotomies have ended up when faced with the ecological meta-crisis— but it is also meant in a very material sense: we have mobilized the natural world on a large scale, it is becoming a fluid, viscous, dispersed, turbid entity. The three registers, as heuristic tools, represent certain distinctive yet interrelated qualities of temporal–spatial circulation and exchange within this physical world set in anthropogenic motion. Highly sensitive to the perturbations we have caused upon them, the three offer opportunities to sound out our readings of the earthly transition we are currently experiencing.

Grain displays the dynamism of the particular in its aggregated state: the constant flow, circulation, and translocation of myriad granularized bits, whether concrete particles, such as grains of dust or pollen, or abstract entities, such as units of account or points. Rather than departing from the problematic notion of “solidity,” the granular is characterized as a quantifiable density of aggregation, which lends itself to a specific logic of movement and morphology. As such, it distances itself from a clear demarcation of boundaries, a finite “edge,” and instead establishes dynamic ways of mixing, recomposing, and dispersing: the operative figures of the mud. Some of the keywords are dust, ash, sand, soot, colloids, aerosols, molecules, pollen, points, dots, and pixels…

As Vapor, motion frees itself, flowing up, across, between. Due to a fundamental phase-change, which simultaneously involves matter and energy conversion, solidity disintegrates; density loosens up, disperses, and undergoes diffusion. The particular unfolds toward an expanding generality, an active process of “undoing.” The constant motion of expansion exhibited by the vaporous gives it an ephemeral character: eventually, its constituents will no longer be there, or one vapor degrades and dissolves into another. Vapor counteracts setting, aggregation, and sedimentation, delineating change and, thus, marking time. Indeed, it is one way to think about entropy, the irreversible dissipation of usable energy as times goes by. Keywords are fluids, whether gaseous or liquid, vapors, phase-change, thermodynamics, convection, turbulence, breaths, and smells…

Primal and ancient in usage, both the concept and imagination of Ray give “shape” to a shapeless stream, a form to “un-form.” In fact, rays go far beyond any geometrical purity, and instead refer to the materialization process of a field, electromagnetic, and otherwise. It is a field of vision and non-vision, mind and idea, sensation and reverberation. Realized as visible light, magnetic forces, or blazing heat, bodies and things are constantly interacting with, producing, channeling, and responding within such energetic fields. A “ray” is an act of propagation and diffusion, yet this action may as well not exist if it were not for the simultaneous, immediately observable effects it has on the material world. Energy and matter are co-constitutive. Keywords here might be fire, light, electromagnetic fields, radiation, energy (balance), reflection, and interference…

The authors you have collected for this set of books range from novelists to scientists to historians to philosophers and beyond. How did you chose the varied, very diverse group of texts for this collection?

The central idea was to situate other forms of knowledge within the conditions set by the Anthropocene. From there we set out for a search as wide in scope as possible. Our method of collecting the historical “documents” avoided sequential argumentation, instead reaching out for novel associations, unexpected connections, and instances of wondrous reenchantment. With this publication, we propose a rereading and reassembling of the history of imagination, according to the textures felt out within this selection. We have invited an equally wide range of thinkers and practitioners—scientists, artists, writers, curators, and humanists—to respond, respectively, to a specific entry within our proposed collection. Each historical source thus is paired with a contemporary reflection. The authors were given free reign in their approaches, some directly approaching their material, others departing from it; accordingly the responses exhibit a broad range of address, from analyses to far-flung associations.

Packed with a combination of modern metaphysics and ancient hard science, poetic experiences, and graphic experiments, this publication presents traces within the “mud” mentioned above—that is, with the ground of the Anthropocene—as a collection of excursions through the stories that worlds and times have called into being.

Can you give us examples of thinkers from very different fields who came into a kind of dialogue in your book?

Dispersed across the three sections—“Grain,” “Vapor,” and “Ray”—a wide variety of historical text sorts are to be found, each paired with a contemporary reading by invited contributors. Fragments from the more classical history of ideas, such as Hippocrates’ “Breaths” (5th cent. BC) and Al‐Haitham’s “Optics” (1011‐21) meet scientific studies offering audacious leaps of imagination, such as J.C. Maxwell’s “On Physical Lines of Force” (1861) and John Archibald Wheeler’s concept of “It from Bit” (1990), while placed alongside contemplations from the heydays of natural philosophy, such as Diderot’s “Alembert’s Dream” (1769).

Experimental pieces written by artists, such as Robert Smithson or Paul Klee, show the idiosyncratic languages necessary to address the blurred distinction between the representation of thought and the factual omnipresence of entangled, animated matter. Literary imagination abounds with material considerations, cutting across geographies and temporalities: from the “Baburnama” (1589‐90) to “Gravity’s Rainbow” (Thomas Pynchon, 1973). Movement, its duration and scope, the magnitude of its dispersion and the density of its accumulation, has stimulated the development of practical philosophies as well as choreographic techniques, such as in the works of Moshe Feldenkrais and Rudolf von Laban. The intuition that the world contains secret, hidden knowledge has engendered complex spiritual systems, with complementary apocrypha, such as the “Bardo Thodol.”

It seemed imperative to examine materials that emerge from social, political, and economic fields of activity, as it is here where matters of concern begin to articulate their interconnectedness. Mesopotamian cuneiform tablets documenting grain resources meet the 20th century economic writings of John Maynard Keynes, advocating a plan to administer global debt through a single currency. Buckminster Fuller’s poem “Machine Tools” (1940) calls out a technological dream of a more efficient, ecologically integrated future, hitting against the wall of the categorically unsolvable “wicked problems” as brought forward by planning theorists Horst Rittel and Melvin Webber (1973) and resounding against “The Accursed Share” (1949), in which Georges Bataille articulates his general economy, based on an expenditure of excess energy in the form of luxury and celebration. Images from Ebrahim Golestan’s documentary of the Persian Gulf’s petroleum infrastructure and changing environmental conditions from the early 1960s poetically capture an ongoing history of expansion, extraction, and exploitation, while John Wilkin’s “Mercury, Swift Messenger” (1649) already demarcates that virtual space of relay and response that forms today’s “cloud” of constant information exchange.

How would you like this collection to change our notion of how we relate to the earth?

The world of the Anthropocene exhibits a mundane gravity. The news, the feed, the live stream, the status update, the flow of bits and bytes, the push notifications, our constant information flows, all bearing the quality of finitude, immediacy, and disharmony. Today, planes crash or disappear off the radar, epidemic diseases are merely managed instead of cured, methane gas erupts due to global warming, mud volcanoes are flowing, unstoppable, after drilling accidents, genocidal wars are fought, occupations continue, barbarism abounds, the weather, indeed, is strange, kids, clubbing, dance all weekend high on horse tranquilizers, toxic fluids are shared body between body in the nighttime capitals of Southeast Asia, yoga workshops in California offer Paleolithic snacks, and every Monday it is business-as-usual, back-to-work, as if the nineteenth century never ended. Work, capital, play.

As of tomorrow, we shall need a new art named by its true appellation — gaia scienza — the Science of the Earth. It is rooted in history, but not the “universalist” history we know all too well, with a bulldozing that mercilessly moves forward, seeking a conclusion, making  a point, arguing a thesis, aiming at synthesis. The gaia scienza searches the creative, the material output of all times, those matters that have contributed to form the history of imagination. Heinrich Heine hit the nail: “all configurations that have previously existed on this earth must yet meet, attract, repulse, kiss, and corrupt each other again.”  In this cultivated sensitivity for flows and its ruptures, finally, the Anthropocene can rid us of the Enlightenment project, for, as Woodbine put it, “in the Anthropocene, the critical gesture is finished. It’s so liberating […] everything is to be reinvented.” We can embark on an Aesthetic Project, a practice of anamnesis, of remembering to remember not to forget.