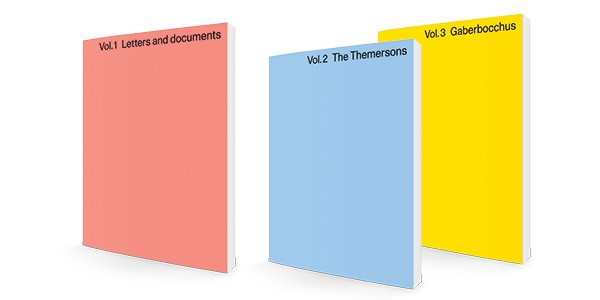 Documents, photographs, and artwork from the archive of Stefan and Franciszka Themerson and material from their avant-garde publishing house, Gaberbocchus Press

The MIT Press is proud to publish The Themerson Catalogue, a three-volume set featuring the archive of Stefan and Franciszka Themerson, including material from their small avant-garde press Gaberbocchus. This beautiful, monumental collection evokes fifty years of independent creative enterprise.

This monumental three-volume publication documents the life and work of the Themersons: Stefan Themerson (1910-1988) filmmaker, writer, and publisher, and his wife, Franciszka Themerson (1907 – 1988) painter, illustrator, theatre designer, and publisher. Both were active members of the Polish avant-garde, but in 1938 they moved to Paris, the centre of the avant-garde at the time. During World War II they found their way to London, where they continued their work and where they stayed.

In 1948, they founded the Gaberbocchus Press (Gaberbocchus is a Latinization of ‘Jabberwocky’) and published the first English editions of Alfred Jarry, Raymond Queneau, the Pataphysicians, and others, alongside work by young British writers, who fell outside the commercial mainstream.

Volume III presents the history of Gaberbocchus Press from 1948 to 1979, including all publications, details of work on the books, reviews, and the day-to-day life of the Press. It also chronicles the Common Room (1957 – 1959) located in the basement of Gaberbocchus Press, the first London club of which the aim was to bring the arts and the sciences together.

In words and images, poetry and doodles, satire and seriousness, these three volumes evoke fifty years of independent creative enterprise in a cold climate.

Both the Themersons were born in Poland, lived in France, and but spent most of their life in England. With their Gaberbochus Press, they published more than 60 titles, also featuring their increasingly multi-disciplinary work. After their deaths, their archive, detailed in these three volumes published by MIT Press, was transferred to the National Library in Warsaw.

Jasia Reichardt is a writer on art and exhibition organizer. She was assistant editor of the London-based Art News and Review; Assistant Director of the Institute of Contemporary Art in London, and Director of the Whitechapel Art Gallery in London. Beginning in 1989, with the art historian and artist, Nick Wadley, she worked on this three-volume catalogue of the Themerson Archive.

Nick Wadley was the head of art history at Chelsea School of Art and was the author of numerous books on the nineteenth and twentieth-century art, including the standard volume on the Impressionist and Post-Impressionist drawing. His last book, Franciszka Themerson, was published in 2019.

Learn more about The Themerson Catalog