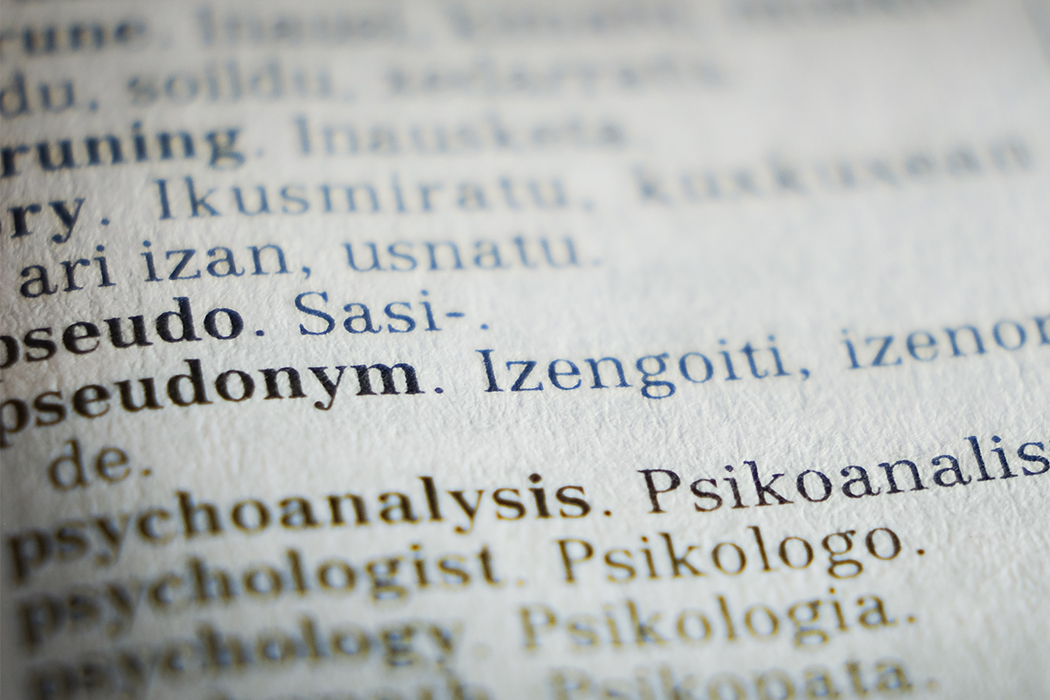 Recognizing the father of modern linguistics with books about language

Noam Chomsky, famed MIT professor and celebrated linguist, philosopher, and cognitive scientist, has made such an outsized impact on the world of modern linguistics that he has come to be recognized as the father of the discipline. He is the author of numerous influential books on the subject, including the landmark works Aspects of the Theory of Syntax and The Minimalist Program, both published (and recently reissued, in 20th- and 50th-anniversary editions) by the MIT Press.

Chomsky, who is still opening up new topics of inquiry, turns 92 today. And with a new book coming out next year—a wide-ranging conversation with his longtime colleague and fellow MIT Press author Andrea Moro—he shows no signs of slowing down. To celebrate this day, we’ve gathered a list of works, including several key contributions from Chomsky himself, on a couple of his favorite topics.

Why Only Us: Language and Evolution by Robert C. Berwick and Noam Chomsky 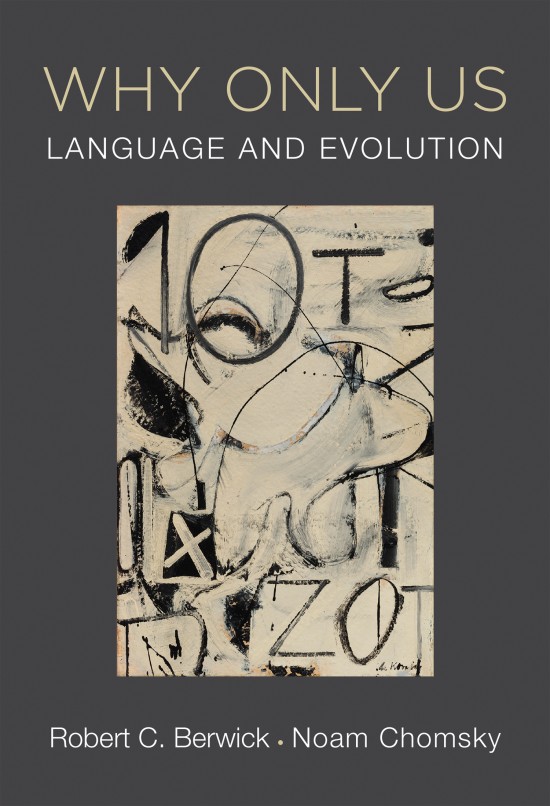 We are born crying, but those cries signal the first stirring of language. Within a year or so, infants master the sound system of their language; a few years after that, they are engaging in conversations. This remarkable, species-specific ability to acquire any human language—“the language faculty”—raises important biological questions about language, including how it has evolved. This book by two distinguished scholars—a computer scientist and a linguist—addresses the enduring question of the evolution of language.

“Why Only Us: Language and Evolution is a loosely connected collection of four essays that will fascinate anyone interested in the extraordinary phenomenon of language.” —New York Review of Books

Read a discussion between Chomsky and MIT Press director Amy Brand in the MIT Press Reader. 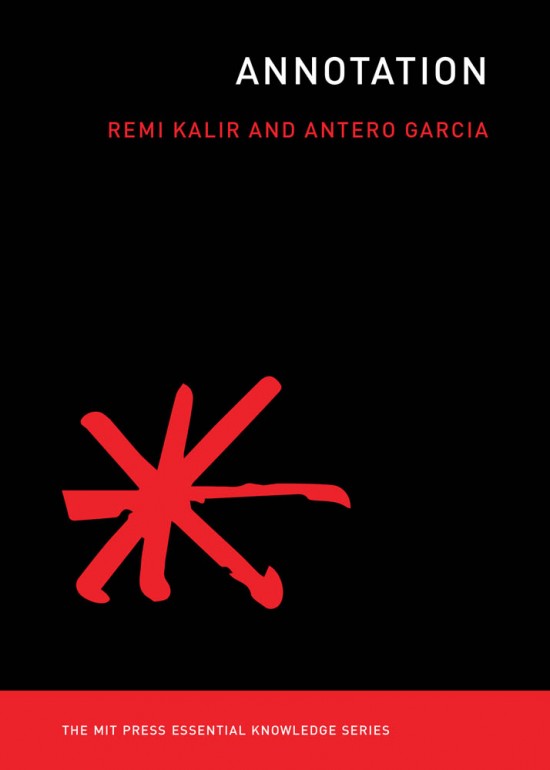 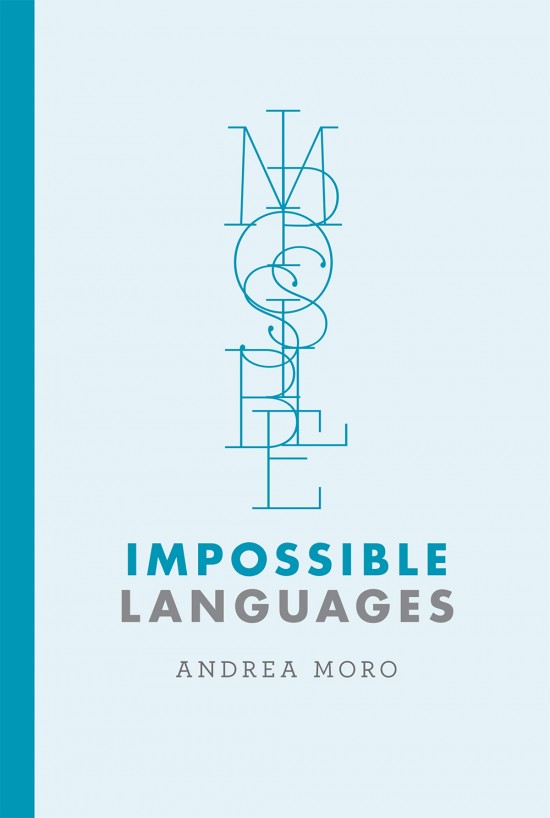 “In this beautifully written and insightful work Andrea Moro draws on his work on language and the brain to make a powerful case for there being intelligible limits to possible human languages.” —Barry C. Smith, University of London, coeditor of The Oxford Handbook of Philosophy of Language

Read an excerpt from the book in the MIT Press Reader: What Is the Sound of Thought? 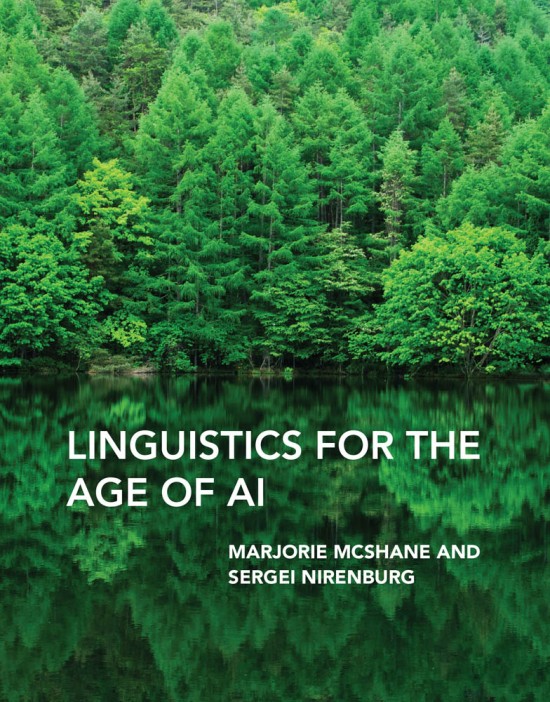 One of the original goals of artificial intelligence research was to endow intelligent agents with human-level natural language capabilities. In this book, Marjorie McShane and Sergei Nirenburg return to this original goal and present a human-inspired, linguistically sophisticated model of language understanding for intelligent agent systems that emphasizes meaning—the deep, context-sensitive meaning that a person derives from spoken or written language.

“This book summarizes an exciting approach to knowledge-rich natural language understanding, in the context of language-using AI agents. Anyone interested in building cognitive systems that use language should read this book.” —Ken Forbus, Northwestern University

A Brief History of the Verb To Be by Andrea Moro, translated by Bonnie McClellan-Broussard 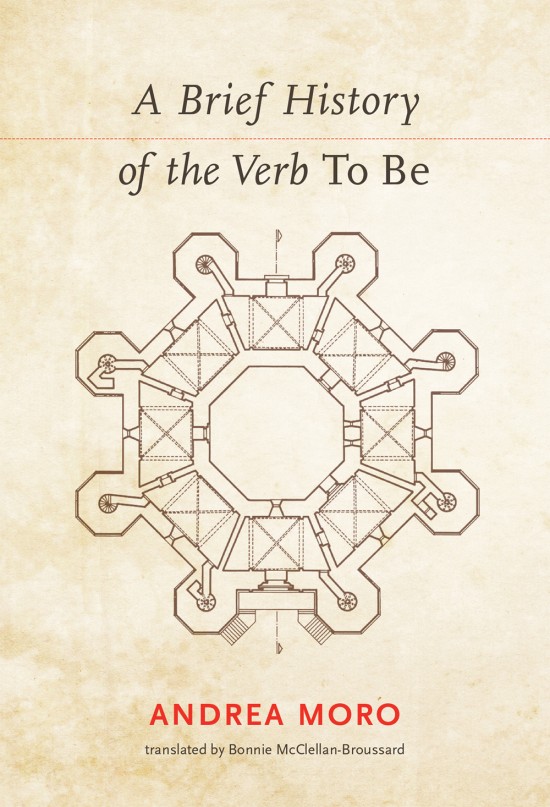 Beginning with the early works of Aristotle, the interpretation of the verb to be runs through Western linguistic thought like Ariadne’s thread. As it unravels, it becomes intertwined with philosophy, metaphysics, logic, and even with mathematics—so much so that Bertrand Russell showed no hesitation in proclaiming that the verb to be was a disgrace to the human race. A Brief History of the Verb To Be offers a journey through linguistic time and space, from Aristotle through the twentieth century’s “era of syntax,” in search of a dangerous verb and its significance.

“A must-read for anyone who is interested in the syntax of copular sentences. A particular merit of Moro’s book, and possibly its greatest achievement, is that it encourages readers to ask their own questions at almost every turn of the argument.” —Journal of Linguistics

Sympathy for the Traitor: A Translation Manifesto by Mark Polizzotti 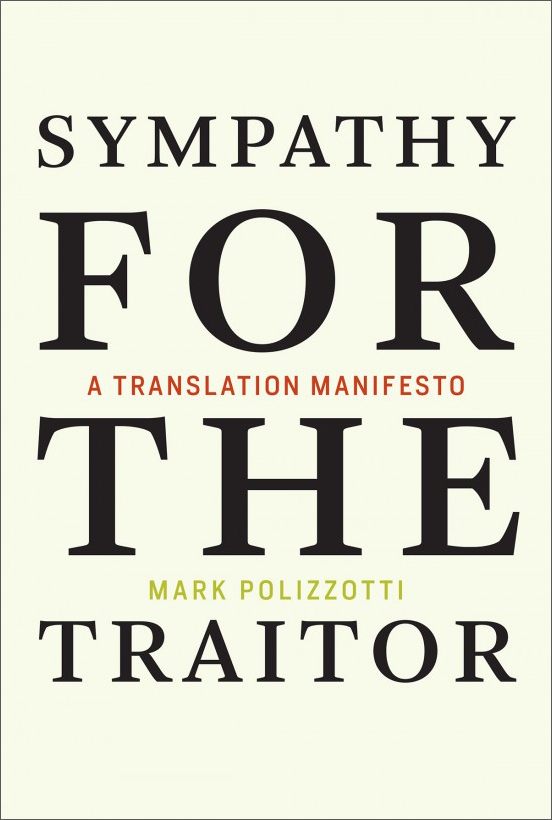 What is the ultimate goal of a translation? What does it mean to label a rendering “faithful”? (Faithful to what?) Is something inevitably lost in translation, and can something also be gained? Does translation matter, and if so, why? Unashamedly opinionated, both a manual and a manifesto, Polizzotti’s book invites us to sympathize with the translator not as a “traitor” but as the author’s creative partner.

“Lively, readable, and often funny … a likably idiosyncratic sequence of essays on a topic that is of more importance than ever in our globalized world.” —Emily Wilson, New York Review of Books

Read an excerpt from the book in the MIT Press Reader: The Silences Between: On the Perils and Pitfalls of Translation

Aspects of the Theory of Syntax, 50th Anniversary Edition by Noam Chomsky 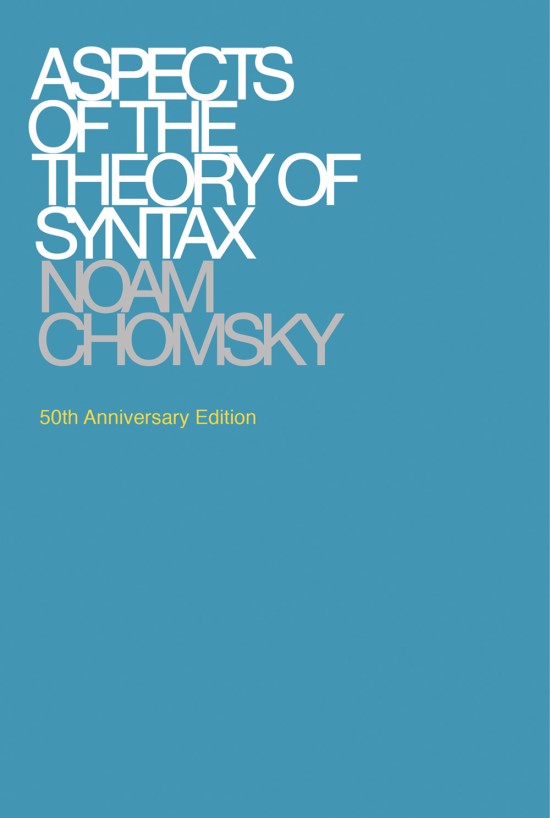 Noam Chomsky’s Aspects of the Theory of Syntax, first published in 1965, was a landmark work in generative grammar that introduced certain technical innovations still drawn upon in contemporary work. The fiftieth anniversary edition of this influential book includes a new preface by the author that identifies proposals that seem to be of lasting significance, reviews changes and improvements in the formulation and implementation of basic ideas, and addresses some of the controversies that arose over the general framework. 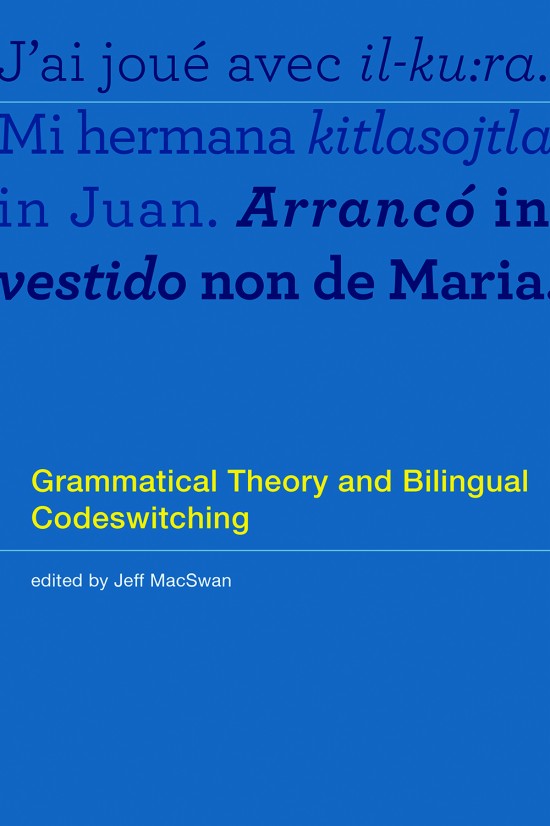 Codeswitching is the alternate use of two or more languages among bilingual interlocutors, involving the mixing of phonologically distinctive elements into a single utterance: Mi hermano bought some ice cream. Grammatical Theory and Bilingual Codeswitching examines the grammatical properties of languages mixed in this way, focusing on cases of language mixing within a sentence. It considers the grammar of codeswitching from a variety of perspectives, offering a collection of theoretically significant work by the leading researchers in the field.

Irony and Sarcasm by Roger Kreuz 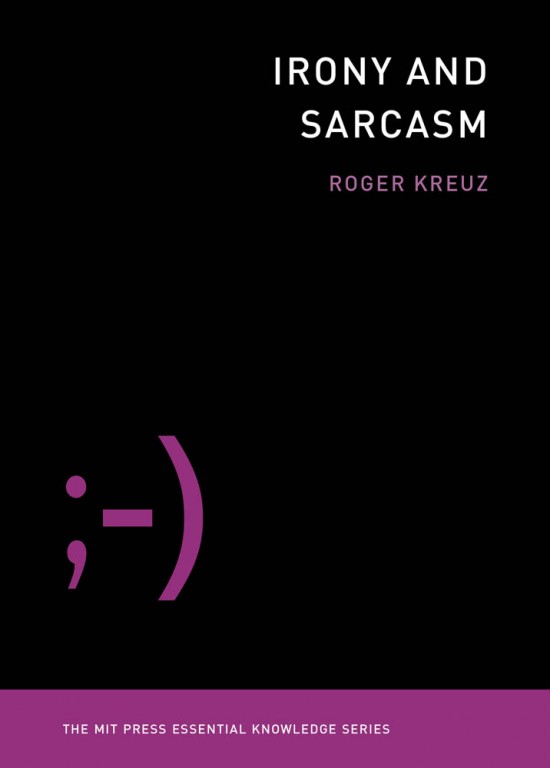 Irony and sarcasm are two of the most misused, misapplied, and misunderstood words in our conversational lexicon. In this volume in the MIT Press Essential Knowledge series, psycholinguist Roger Kreuz offers an enlightening and concise overview of the life and times of these two terms, mapping their evolution from Greek philosophy and Roman rhetoric to modern literary criticism to emojis.

“For those just beginning their journey into the world of figurative meanings, you just got a roadmap that was previously nowhere to be found.” —Metaphor and Symbol

Read an excerpt from the book on the MIT Press Reader: What Irony Is Not 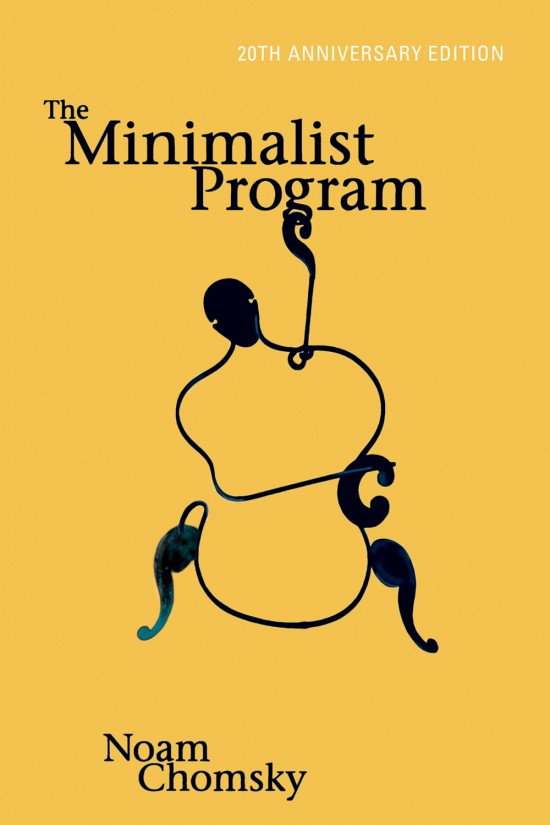 In his foundational book, The Minimalist Program, published in 1995, Noam Chomsky offered a significant contribution to the generative tradition in linguistics. This twentieth-anniversary edition reissues this classic work with a new preface by the author. In four essays, Chomsky attempts to situate linguistic theory in the broader cognitive sciences, with the essays formulating and progressively developing the minimalist approach to linguistic theory. With this book, Chomsky built on pursuits from the earliest days of generative grammar to formulate a new research program that had far-reaching implications for the field.

Computational Linguistics is the longest-running publication devoted exclusively to the computational and mathematical properties of language and the design and analysis of natural language processing systems. This highly regarded quarterly offers university and industry linguists, computational linguists, artificial intelligence and machine learning investigators, cognitive scientists, speech specialists, and philosophers the latest information about the computational aspects of all the facets of research on language.