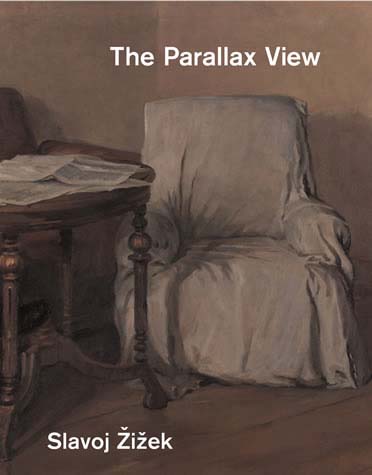 Today is Slavoj Žižek’s birthday! We’re celebrating this famous philosopher-cultural critic by sharing a snippet from The Parallax View. This book not only expands Zizek’s Lacanian-Hegelian approach to new domains (notably cognitive brain sciences) but also provides the systematic exposition of the conceptual framework that underlies his entire work. In this brain “tickler,” philosophical and theological analysis, detailed readings of literature, cinema, and music coexist with lively anecdotes and obscene jokes.

Many times I am asked the obvious yet pertinent question about the title of my longest book (the present one excepted): “So who or what is tickling the ticklish subject?” The answer, of course, is: the object—however, which object? This, in a nutshell (or, rather, like a nut within the shell), is the topic of this book. The difference between subject and object can also be expressed as the difference between the two corresponding verbs, to subject (submit) oneself and to object (protest, oppose, create an obstacle). The subject’s elementary, founding, gesture is to subject itself—voluntarily, of course: as both Wagner and Nietzsche, those two great opponents, were well aware, the highest act of freedom is the display of amor fati, the act of freely assuming what is necessary anyway. If, then, the subject’s activity is, at its most fundamental, the activity of submitting oneself to the inevitable, the fundamental mode of the object’s passivity, of its passive presence, is that which moves, annoys, disturbs, traumatizes us (subjects): at its most radical the object is that which objects, that which disturbs the smooth running of things. Thus the paradox is that the roles are reversed (in terms of the standard notion of the active subject working on the passive object): the subject is defined by a fundamental passivity, and it is the object from which movement comes—which does the tickling. But, again, what object is this? The answer is: the parallax object.