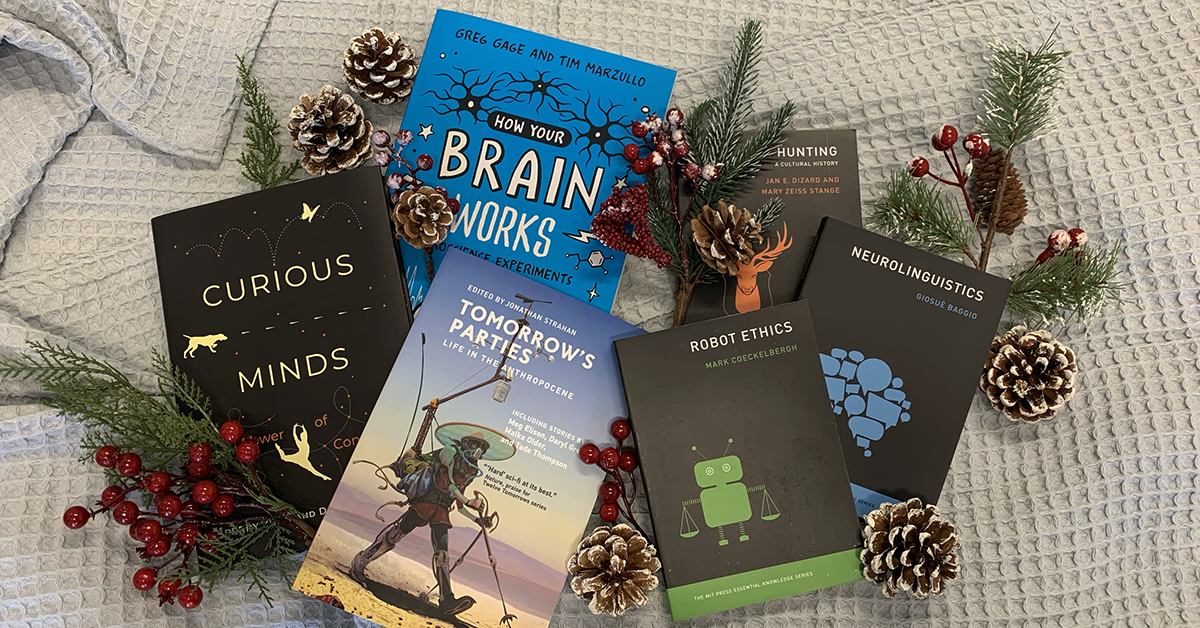 Treat your shelf to something curious this winter

As winter approaches, we here at the MIT Press prepare ourselves for the upcoming chill in the time-honored fashion of all readers—by gathering our books, blankets, and mugs of our hot beverage of choice and perching ourselves next to a fireplace for the next three-to-five months. It’s hard work, but someone has to do it.

This reading season, we invite you to treat yourself—and your shelf—to something new as you hunker down. In this first entry of our four-part winter reading series, we highlight some of the best titles to pique your curiosity, with books on the ethics of robots, neuroscience experiments, and the nature of curiosity.

Without further ado, we urge our fellow readers to grab a book, grab a blanket, and join us in our wintery forays. (We’ll see the rest of you in May.)

Use code MITPHoliday22 at checkout on PenguinRandomHouse.com for 20% off MIT Press titles with free shipping from November 14, 2022 to January 31, 2023. *

(*Discount code applies to US addresses.)

Curious Minds: The Power of Connection by Perry Zurn and Dani S. Bassett

Curious about something? Google it. Look at it. Ask a question. But is curiosity simply information seeking? According to this exhilarating, genre-bending book, what’s left out of the conventional understanding of curiosity are the wandering tracks, the weaving concepts, the knitting of ideas, and the thatching of knowledge systems—the networks, the relations between ideas and between people. Curiosity, say Perry Zurn and Dani Bassett, is a practice of connection: it connects ideas into networks of knowledge, and it connects knowers themselves, both to the knowledge they seek and to each other.

“Zurn and Bassett changed my mind about what curiosity is at its essence. This bold new theory for curiosity has enormous implications for building a more curious, creative, and equitable society.” —Angela Duckworth

How Your Brain Works: Neuroscience Experiments for Everyone by Greg Gage and Tim Marzullo

The workings of the brain are mysterious: What are neural signals? What do they mean? How do our senses really sense? How does our brain control our movements? What happens when we meditate? Techniques to record signals from living brains were once thought to be the realm of advanced university labs… but not anymore! This book allows anyone to participate in the discovery of neuroscience through hands-on experiments that record the hidden electrical world beneath our skin and skulls. In How Your Brain Works, neuroscientists Greg Gage and Tim Marzullo offer a practical guide—accessible and useful to readers from middle schoolers to college undergraduates to curious adults—for learning about the brain through hands-on experiments.

“Rather than bringing the reader to the neuroscientist’s lab, it brings the lab to the reader.” —Dani S. Bassett, University of Pennsylvania & the Santa Fe Institute; author of Curious Minds

Does a robot have moral agency? Can it be held responsible for its actions? Do humans owe robots anything? Will robots take our jobs? These are some of the ethical and moral quandaries that we should address now, as robots and other intelligent devices become more widely used and more technically sophisticated. In this volume in the MIT Press Essential Knowledge series, philosopher Mark Coeckelbergh does just that. He considers a variety of robotics technologies and applications—from robotic companions to military drones—and identifies the ethical implications of their use. Questions of robot ethics, he argues, are not just about robots but are, crucially, about humans as well.

Hunting has a long history, beginning with our hominid ancestors. The invention of the spear allowed early humans to graduate from scavenging to actual hunting. The famous cave paintings at Lascaux show a meticulous knowledge of animal behavior and anatomy that only a hunter would have. This volume in the MIT Press Essential Knowledge series traces the evolution of hunting, from Stone Age hunting and gathering to today’s regulated sport hunting. Humans have been hunting since we became human—but did hunting make us human?

Tomorrow’s Parties: Life in the Anthropocene edited by Jonathan Strahan

We are living in the Anthropocene—an era of dramatic and violent climate change featuring warming oceans, melting icecaps, extreme weather events, habitat loss, species extinction, and more. What will life be like in a climate-changed world? In Tomorrow’s Parties, science fiction authors speculate how we might be able to live and even thrive through the advancing Anthropocene. In ten original stories by writers from around the world, an interview with celebrated writer Kim Stanley Robinson, and a series of intricate and elegant artworks by Sean Bodley, Tomorrow’s Parties takes rational optimism as a moral imperative, or at least a pragmatic alternative to despair.

Explore more new and forthcoming books from the MIT Press