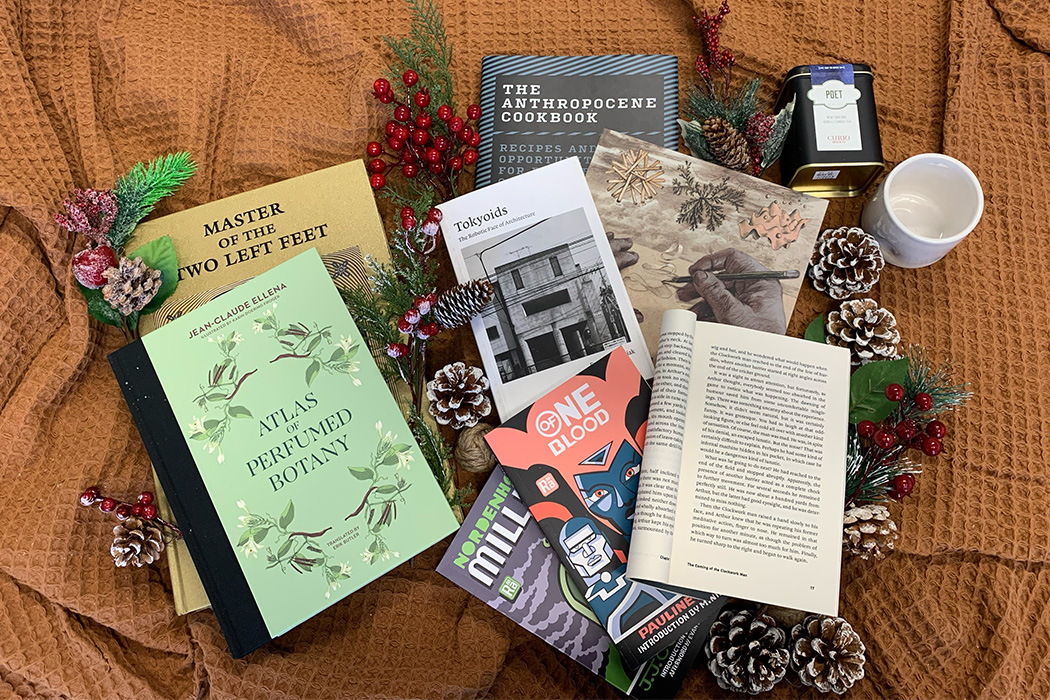 Treat your shelf to something creative this winter

As winter approaches, we here at the MIT Press prepare ourselves for the upcoming chill in the time-honored fashion of all readers—by gathering our books, blankets, and mugs of our hot beverage of choice and perching ourselves next to a fireplace for the next three-to-five months. It’s hard work, but someone has to do it.

This reading season, we invite you to treat yourself—and your shelf—to something new as you hunker down. In this first entry of our four-part winter reading series, we highlight some of the best creative titles on our list, with books on the art of fragrance composition, forgotten sci-fi, and how drawing can be used as a tool for thought.

Without further ado, we urge our fellow readers to grab a book, grab a blanket, and join us in our wintery forays. (We’ll see the rest of you in May.)

Use code MITPHoliday22 at checkout on PenguinRandomHouse.com for 20% off MIT Press titles with free shipping from November 14, 2022 to January 31, 2023. *

(*Discount code applies to US addresses.)

Drawing Thought: How Drawing Helps Us Observe, Discover, and Invent by Andrea Kantrowitz

Drawing is a way of constructing ideas and observations as much as it is a means of expressing them. When we are not ready or able to put our thoughts into words, we can sometimes put them down in arrangements of lines and marks. Artists, designers, architects, and others draw to generate, explore, and test perceptions and mental models. In Drawing Thought, artist-educator Andrea Kantrowitz invites readers to use drawing to extend and reflect on their own thought processes. She interweaves illuminating hand-drawn images with text, integrating recent findings in cognitive psychology and neuroscience with accounts of her own artistic and teaching practices.

“Brilliant, playful, and bursting with wonderfully imaginative drawings, Drawing Thought is an invaluable resource for anyone looking to incorporate drawing into their classroom or spark their own creative excursions. I plan to do both.” —Nick Sousanis, San Francisco State University; author of Unflattening

A garment worker and slipper manufacturer with no training in art, Morris Hirshfield was never expected to make history. Against all odds, his wildly stylized paintings of female figures, often nude, animals, and landscapes became internationally known in the 1940s. Admired by Pablo Picasso, Piet Mondrian, and the French surrealists, his peak moment of visibility occurred in 1943, when the Museum of Modern Art mounted a one-man show of his work. The exhibition was widely reviewed—though mostly reviled—by the press, who jeeringly crowned Hirshfield “Master of the Two Left Feet” for his tendency to display the female body in that unorthodox fashion.

“[T]he definitive book on the artist.” —The Wall Street Journal

“Over a century since its original publication, Hopkins’s classic remains as relevant today as ever.” —P. Djèlí Clark, author of Ring Shout

For perfume makers, each smell carries with it a multitude of associations and impressions that must be carefully analyzed and understood before the sum of all its parts emerges. All perfumers have their own idiosyncratic methods, drawn from their individual olfactory experiences, for classifying fragrances. In Atlas of Perfumed Botany, virtuoso perfumer Jean-Claude Ellena leads readers on a poetic, geographic, and botanical journey of perfume discovery. Ellena offers a varied and fascinating cartography of fragrances, tracing historical connections and cultural exchanges. Full-page entries on plants ranging from bergamot to lavender are accompanied by detailed and vivid full-color botanical illustrations.

“Ellena writes in a vivid prose, and has a knack for translating smells into the written word… This enchanting volume merits a spot on any perfume connoisseur’s shelf.” —Publishers Weekly

The Anthropocene Cookbook: Recipes and Opportunities for Future Catastrophes by Zane Cerpina and Stahl Stenslie

In the age of the Anthropocene—a era characterized by human-caused climate disaster—catastrophes and dystopias loom. The Anthropocene Cookbook takes our planetary state of emergency as an opportunity to seize the moment to imagine constructive change and new ideas. How can we survive in an age of constant environmental crises? How can we thrive? The Anthropocene Cookbook answers these questions by presenting a series of investigative art and design projects that explore how art, food, and creative thinking can prepare us for future catastrophes. This cookbook of ideas rethinks our eating habits and traditions, challenges our food taboos, and proposes new recipes for humanity’s survival.

“Through thought-provoking projects and commentary, Cerpina and Stenslie encourage us to think and reflect in order to spark our collective imagination.” —Stephanie Tharp, University of Michigan; coauthor of Discursive Design

“Perhaps the outstanding scientific romance of the 1920s.” —Anatomy of Wonder

In Tokyoids, architect François Blanciak surveys the robotic faces omnipresent in Tokyo buildings, offering an architectural taxonomy based not on the usual variables—size, material, historical style—but on the observable expressions of buildings. Are the eyes (windows) twinkling, the mouth (door) laughing? Is that balcony a howl of distress? Investigating robot aesthetics through his photographs of fifty buildings, Blanciak argues that the robot face originated in architecture—before the birth of robotics—and has played a central role in architectural history. Part photographic survey, part theoretical inquiry, Tokyoids upends the usual approach to robotics in architecture by considering not the automation of architectural output but the aesthetic properties of the robot.

“This book is more than a treatise on robotic aesthetics. It is a psycho-historical critique—and simultaneously a visual celebration—of the techno-biological world in which we live.” —Mark Jarzombek, MIT

Explore more new and forthcoming books from the MIT Press