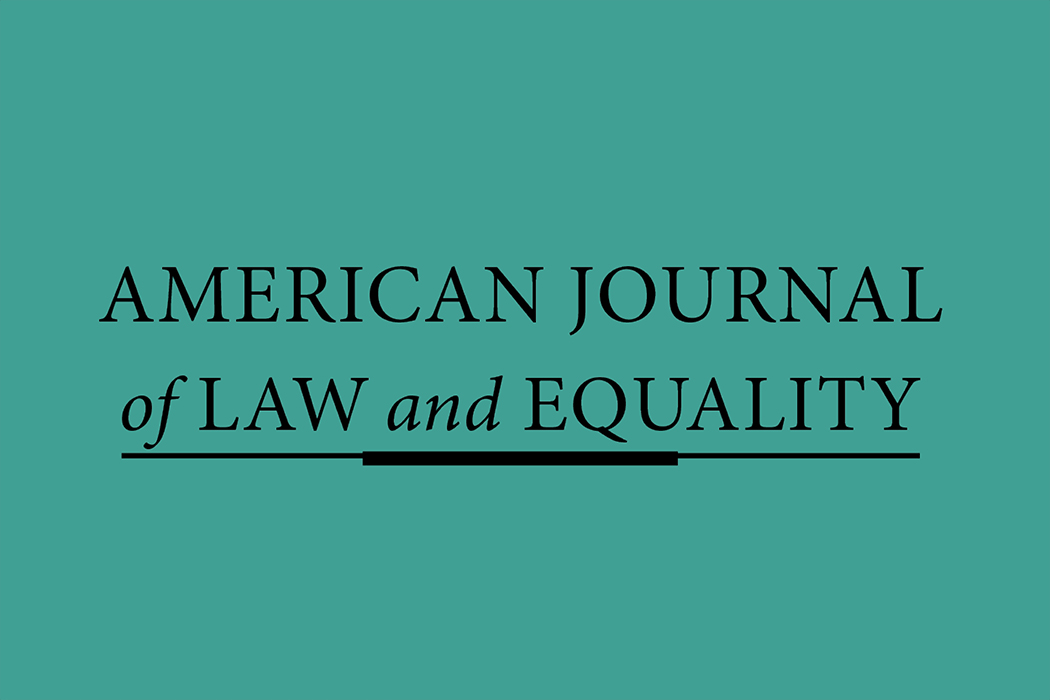 Three Harvard Law School professors have teamed up with the MIT Press to launch a new journal focused on issues of inequality. The American Journal of Law and Equality will be led and edited by its founders, Randall L. Kennedy, the Michael R. Klein Professor of Law; Martha Minow, the 300th Anniversary University Professor; and Cass R. Sunstein, the Robert Walmsley University Professor.

The new journal is expected to appear once per year and include a diversity of scholarship and views from experts and practitioners from in and outside the legal academy. The first issue, expected this summer, will include essays related to Harvard Professor Michael J. Sandel’s recent book, The Tyranny of Merit: What’s Become of the Common Good?, which “challenges the hubris a meritocracy generates among the winners and the harsh judgement it imposes on those left behind.”

“I think that legal academic work at its best improves understanding and also improves practice,” said Sunstein, who is currently on leave from Harvard in the Biden administration, where he is working as senior counselor at the Department of Homeland Security. “So, my own aspiration [for the new journal] is that we will have a better understanding of the inequality questions that our country faces, and that better understanding will inform better practice.”

Citing the host of legal questions related to equality – from the Equal Protection Clause, civil rights laws and the criminal justice system to matters of economics, environmental justice, safety and health, and tax – Sunstein said: “There is no other journal that exclusively focuses on these issues in the United States from the standpoint of law. And whether you’re on the right, on the left, or on the center, you probably are keenly interested in these things. And it’s really the right time to have a focus journal exploring this.”

For Minow, the goals of the new journal are twofold. “One is to stimulate even more discussion about equality and inequality in the law, both theoretically and practically, in the academy,” she said. “By having a whole journal devoted to this subject, we hope both to inspire more attention, and also promote more debate. And the second is, by making this a faculty-led journal, we can use whatever platform we have to push debates and push efforts forward.”

When they first began discussing the idea last summer, Kennedy’s immediate reaction was “let’s get cracking.” The fact that they’d known each other for years, he believed, would help them get the project off the ground more quickly at a time when the need, he said, was “huge and urgent.”

“This was the summer of the George Floyd moment,” he said. “On the one hand, you have this tremendous upsurge in protest against police misconduct along racial lines. At the same time, we’re in the middle of this pandemic, which has underscored so many racial inequities in America. And we also had the anxiety of the coming election. It seemed the perfect moment for a new effort to explore the question of inequality.”

Like Kennedy, Minow believes the project is an opportunity to “lift up and amplify work on equality and inequality, especially in the wake of George Floyd.” It is also, she said, an extension of why she was initially attracted to the study of law.

“I was drawn to a legal career because of issues of inequality,” she said. “And while there has been some improvement over the course of my lifetime, there have also been tremendous setbacks. I think the law is a tool, but it has so far proved an inadequate tool to address inequality in American society. We have to spend more time on the inequalities that are embedded in the law itself, and in the legal system itself. So, I think that’s one reason to turn more attention to the academic, legal study of the subject.”

For Nick Lindsay at the MIT Press, it is an opportunity to help share new insights on a critical topic. “The MIT Press is thrilled to partner with the American Journal of Law and Equality,” said Lindsay, director of journals and open access. “We look forward extending the reach of this important new source of scholarship on equality and the law in the United States.”

The publication’s three Harvard Law editors agree that it will welcome people with a wide range of views and backgrounds, including former government employees, academics with a philosophical bent, economists accustomed to focusing on incentives, as well as specialists in constitutional history.

“Our goal is to have a diversity of perspectives represented,” said Sunstein. “And we are welcoming submissions from people who have very different points of view on the Constitution and the law. This is fundamentally an academic journal, and perspectives are most welcome.”

The journal’s first issue will include commentary on Sandel’s book from approximately 20 people from a variety of backgrounds, his response to those critiques, and three to five articles on a range of different topics. Kennedy believes that beginning with an examination of meritocracy will be an important starting point that will leave a lasting legacy.

“All sorts of people from various disciplines — economics, anthropology, politics, philosophy, law, etc. – are interested in the issue of meritocracy,” he said. “In the years to come, when a person is interested in investigating meritocracy and its discontents, we think that this symposium will be one of the sources that they’ll want to consult.”

Learn more about The American Journal of Law and Equality