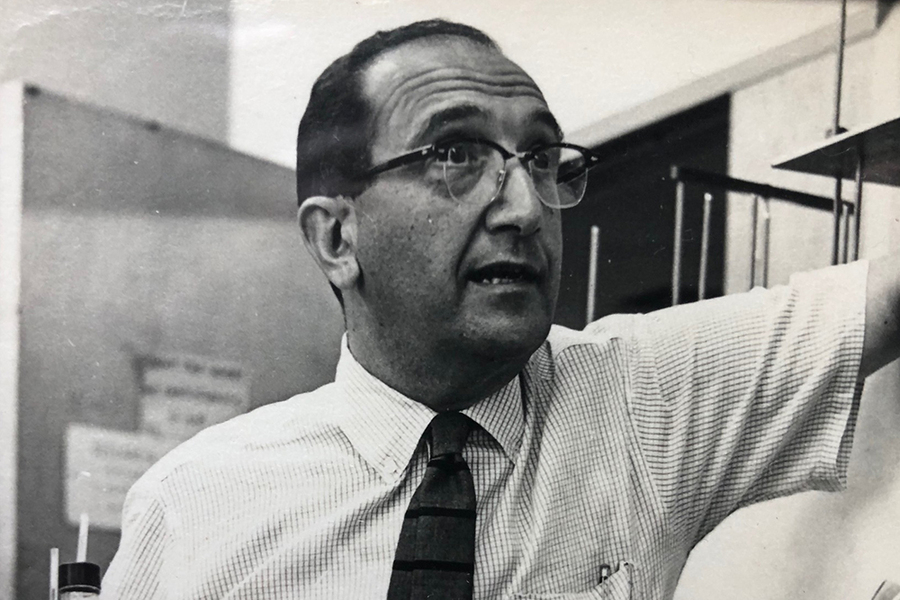 On October 26, the MIT Press Bookstore and the Koch Institute for Integrative Cancer Research at MIT co-hosted a special event launching the new biography Salvador Luria: An Immigrant Biologist in Cold War America by Rena Selya. The book explores the life of MIT Professor Salvador Luria, whose passion for science was equaled by his commitment to political engagement in Cold War America.

Luria was born in Italy, where the Fascists came to power when he was ten. He left Italy for France due to the antisemetic Race Laws of 1938, and then fled as a Jewish refugee from Nazi Europe, making his way to the United States. Once an American citizen, Luria became a grassroots activist on behalf of civil rights, labor representation, nuclear disarmament, and American military disengagement from the Vietnam and Gulf Wars. Luria joined the MIT faculty in 1960 and was the founding director of the MIT Center for Cancer Research (CCR). Throughout his life he remained as passionate about his engagement with political issues as about his science, and continued to fight for peace and freedom until his death.

As inaugural director of the CCR, Professor Luria secured status and funding as an NCI basic cancer center to embark on what were then the vast unknowns of cancer biology, oversaw the physical transformation of a former chocolate factory into a research facility, recruited brilliant young scientists to form its founding faculty, and helped foster a culture of scientific rigor, innovation, and excellence that ultimately helped set the standard for the field.

Institute Professor and Professor of Biology Philip Sharp and Daniel K. Ludwig Professor for Cancer Research Richard Hynes, both founding faculty at the CCR, participated in the special event. Speaking of the Center’s earliest days, Professor Hynes explained, “there was an awful lot of cooperation, which was key in the success of this institution. I credit that to Salva and David [Baltimore] in particular. And it’s continued. Because when you grow up in that sort of environment you learn to repeat it.” The discussion was moderated by Deborah Douglas, Director of Collections & Curator, Science and Technology at the MIT Museum.

Blacklisted from federal funding review panels but awarded a Nobel Prize for his research on bacteriophage, Professor Luria was as much an activist as a scientist. In this first full-length biography of Luria, Selya draws on extensive archival research; interviews with Luria’s family, colleagues, and students; and FBI documents obtained through the Freedom of Information Act to create a compelling portrait of a man committed to both science and society.

The event was fittingly held in the Salvador E. Luria Auditorium at the Koch Institute at MIT. Quoting Zella Hurwitz Luria, Professor Luria’s wife, Selya said “‘Let us celebrate Salva’s life, his humanity, his struggle for understanding life and its biophysical basis, his sense of deep and personal fulfillment at having helped to build what he believed to be the best biology department in the country, his driving need to see justice done, his struggle for a peaceful, democratic world, his real interest in knowing people unlike himself and his love of his family, friends and, coworkers.’ More than thirty years later, it is an honor and pleasure for me to do just that here in the Salvador E. Luria Auditorium.”