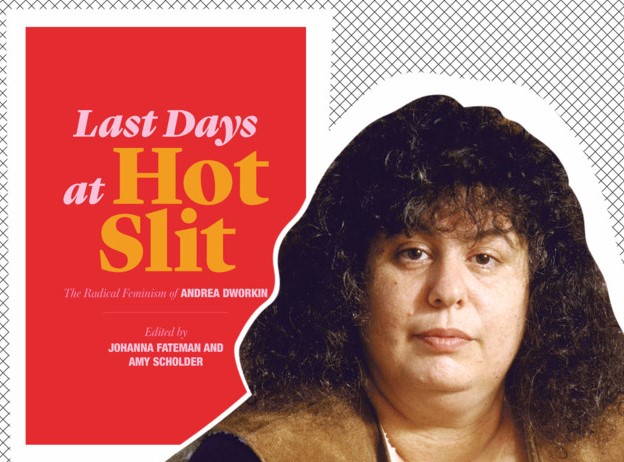 In honor of Women’s History Month, we are featuring an adapted excerpt from Last Days at Hot Slit: The Radical Feminism of Andrea Dworkin, edited by Johanna Fateman and Amy Scholder, which brings together selections from the late Andrea Dworkin’s work, both fiction and nonfiction, with the aim of putting the contentious positions she’s best known for in dialogue with her literary oeuvre.

Warning: This excerpt contains strong language and some sexual thematic themes around rape and rape culture which may be triggering to readers.

I WANT A TWENTY-FOUR-HOUR TRUCE DURING WHICH THERE IS NO RAPE, 1983

This was a speech given at the Midwest Regional Conference of the National Organization for Changing Men in the fall of 1983 in St Paul, Minnesota. One of the organizers kindly sent me a tape and a transcript of my speech. The magazine of the men’s movement, M., published it. I was teaching in Minneapolis. This was before Catharine MacKinnon and I had proposed or developed the civil rights approach to pornography as a legislative strategy. Lots of people were in the audience who later became key players in the fight for the civil rights bill. I didn’t know them then. It was an audience of about 500 men, with scattered women. I spoke from notes and was actually on my way to Idaho—an eight-hour trip each way (because of bad air connections) to give a one-hour speech on Art—fly out Saturday, come back Sunday, can’t talk more than one hour or you’ll miss the only plane leaving that day, you have to run from the podium to the car for the two-hour drive to the plane. Why would a militant feminist under this kind of pressure stop off on her way to the airport to say hi to 500 men? In a sense, this was a feminist dream-come-true. What would you say to 500 men if you could? This is what I said, how I used my chance. The men reacted with considerable love and support and also with considerable anger. Both. I hurried out to get my plane, the first hurdle for getting to Idaho. Only one man in the 500 threatened me physically. He was stopped by a woman bodyguard (and friend) who had accompanied me.

I have thought a great deal about how a feminist, like myself, addresses an audience primarily of political men who say that they are anti-sexist. And I thought a lot about whether there should be a qualitative difference in the kind of speech I address to you. And then I found myself incapable of pretending that I really believe that that qualitative difference exists. I have watched the men’s movement for many years. I am close with some of the people who participate in it. I can’t come here as a friend even though I might very much want to. What I would like to do is to scream: and in that scream I would have the screams of the raped, and the sobs of the battered; and even worse, in the center of that scream I would have the deafening sound of women’s silence, that silence into which we are born because we are women and in which most of us die.

And if there would be a plea or a question or a human address in that scream, it would be this: why are you so slow? Why are you so slow to understand the simplest things; not the complicated ideological things. You understand those. The simple things. The clichés. Simply that women are human to precisely the degree and quality that you are.

And also: that we do not have time. We women. We don’t have forever. Some of us don’t have another week or another day to take time for you to discuss whatever it is that will enable you to go out into those streets and do something. We are very close to death. All women are. And we are very close to rape and we are very close to beating. And we are inside a system of humiliation from which there is no escape for us. We use statistics not to try to quantify the injuries, but to convince the world that those injuries even exist. Those statistics are not abstractions. It is easy to say, “Ah, the statistics, somebody writes them up one way and somebody writes them up another way.” That’s true. But I hear about the rapes one by one by one by one by one, which is also how they happen. Those statistics are not abstract to me. Every three minutes a woman is being raped. Every eighteen seconds a woman is being beaten. There is nothing abstract about it.

It is happening right now as I am speaking.

And it is happening for a simple reason. There is nothing complex and difficult about the reason. Men are doing it, because of the kind of power that men have over women. That power is real, concrete, exercised from one body to another body, exercised by someone who feels he has a right to exercise it, exercised in public and exercised in private. It is the sum and substance of women’s oppression.

It is not done 5000 miles away or 3000 miles away. It is done here and it is done now and it is done by the people in this room as well as by other contemporaries: our friends, our neighbors, people that we know. Women don’t have to go to school to learn about power. We just have to be women, walking down the street or trying to get the housework done after having given one’s body in marriage and then having no rights over it.

That is the way the power of men is manifest in real life. That is what theory about male supremacy means. It means you can rape. It means you can hit. It means you can hurt. It means you can buy and sell women. It means that there is a class of people there to provide you with what you need. You stay richer than they are, so that they have to sell you sex. Not just on street corners, but in the workplace. That’s another right that you can presume to have: sexual access to any woman in your environment, when you want.

Now, the men’s movement suggests that men don’t want the kind of power I have just described. I’ve actually heard explicit whole sentences to that effect. And yet, everything is a reason not to do something about changing the fact that you do have that power.

I have heard in the last several years a great deal about the suffering of men over sexism. Of course, I have heard a great deal about the suffering of men all my life. Needless to say, I have read Hamlet. I have read King Lear. I am an educated woman. I know that men suffer. This is a new wrinkle. Implicit in the idea that this is a different kind of suffering is the claim, I think, that in part you are actually suffering because of something that you know happens to someone else. That would indeed be new.

I mean that there is a relationship between the way that women are raped and your socialization to rape and the war machine that grinds you up and spits you out: the war machine that you go through just like that woman went through Larry Flynt’s meat grinder on the cover of Hustler. You damn well better believe that you’re involved in this tragedy and that it’s your tragedy too. Because you’re turned into little soldier boys from the day that you are born and everything that you learn about how to avoid the humanity of women becomes part of the militarism of the country in which you live and the world in which you live. It is also part of the economy that you frequently claim to protest.

And the problem is that you think it’s out there: and it’s not out there. It’s in you. The pimps and the warmongers speak for you. Rape and war are not so different. And what the pimps and the warmongers do is that they make you so proud of being men who can get it up and give it hard. And they take that acculturated sexuality and they put you in little uniforms and they send you out to kill and to die. Now, I am not going to suggest to you that I think that’s more important than what you do to women, because I don’t.

Excerpted from Last Days at Hot Slit: The Radical Feminism of Andrea Dworkin, edited by Johanna Fateman and Amy Scholder, Distributed for Semiotext(e), The MIT Press, 2019.