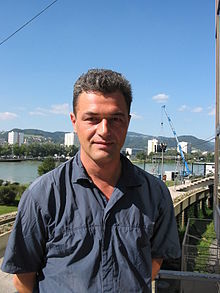 We note, with sadness, the death of Armin Medosch, from cancer. Medosch was a Vienna-based artist, curator, writer, and the author of New Tendencies: Art at the Threshold of the Information Revolution (1961 – 1978). Bruce Sterling reported news of Medosch’s death on Wired, quoting a post by media theorist Felix Stalder. Stalder’s recollection of Medosch is worth quoting at some length.

I first learned of Armin not as a person, but a legend. In the early 1990s, he was one of a band of artists of an unqualifiable streak who roamed the Baltic sea on the Kunst-Raum-Schiff, MS Stubnitz. An 80m former freeze and transport vessel of the GDR high seas fishing fleet, they had re-purposed as a moving center for experimental electronic culture. He curated and organised exhibitions and symposia in Rostock, Hamburg, Malmö and St.Petersburg. The project was incredibly evocative, even for someone like me who had never seen the ship, because it fused many of the ideas that would come to define network culture, namely nomadism, a total disregard for established culture institutions, DIY and an exploration of the wild wastelands opened by the breakdown of the Soviet system, after 1989.

“It’s a shame that the world has lost such a lively activist,” Sterling said. He will, indeed, be missed.