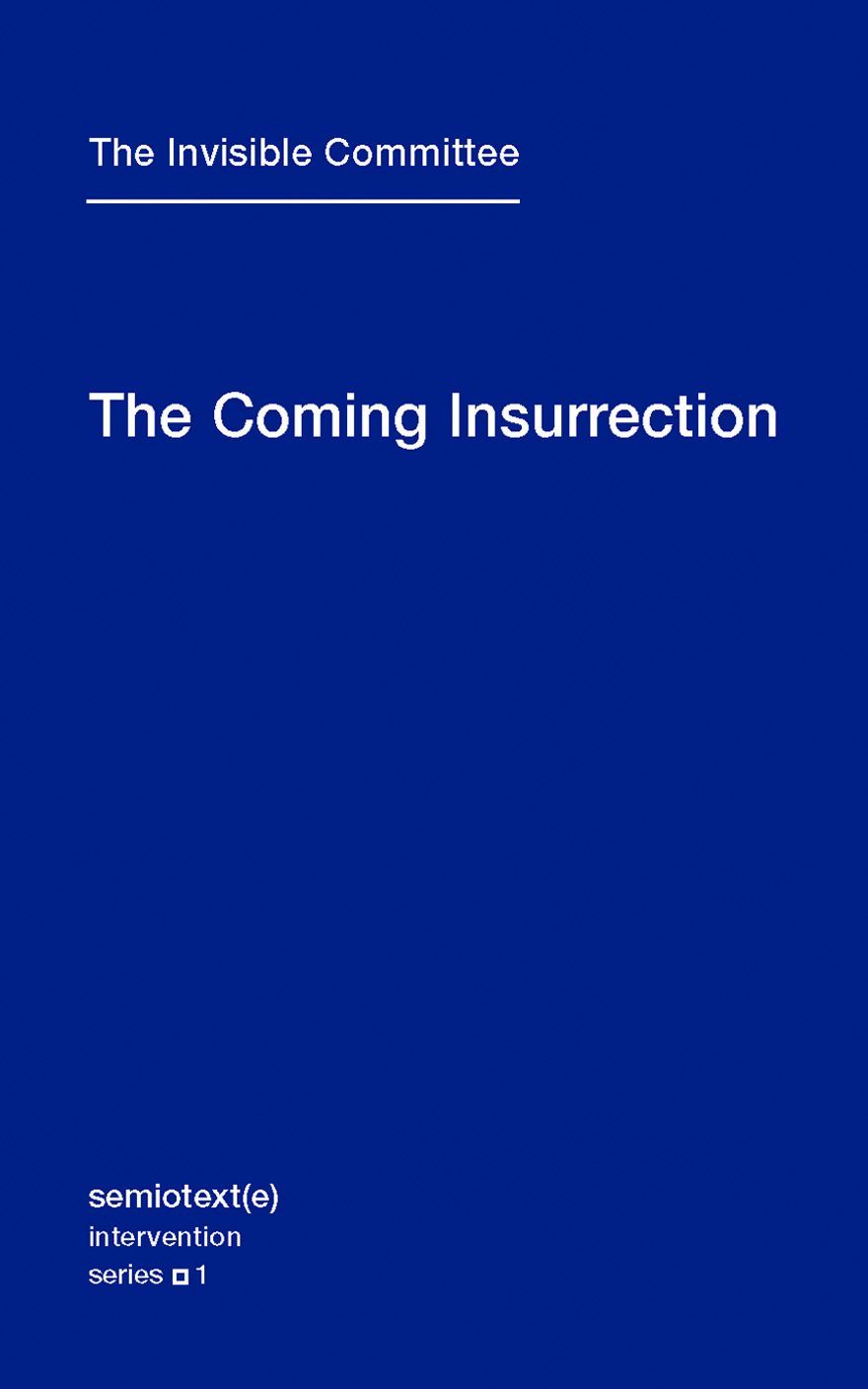 Over the next few months we will be featuring selected works from Semiotext(e)’s Intervention Series. According to Semiotext(e), the Intervention Series “offers polemical texts by intellectual agitators. Short, engaged, and highly focused manifestos, essays, and critiques, these palm-sized salvos address a variety of political and cultural topics but share a passion for provocation, and allow for more immediate excursions in Semiotext(e)’s ongoing mission of intellectual activism”. The first post will feature the infamous The Coming Insurrection authored by The Invisible Committee.

In November of 2008 French police descended on a commune in the remote French village of Tarnac. According to the French government, the commune harbored dangerous anarchists (and some goats) who were plotting attacks against the government. They were also suspected of disrupting the service of a major railway by throwing metal hooks on the tracks. Nine people were arrested and charged with “criminal association with aims of terrorism” sparking debates about the global war on terror. Perhaps the most intriguing aspect of this incident was that one of the arrested, Julien Coupat a contributor to Tiqqun, a French radical political journal, had been placed under surveillance months before the arrest by the French police for allegedly penning The Coming Insurrection. Eventually, after much media scrutiny and no evidence of sabotage the charges were dropped and the Tarnac nine were released.

After the European media left Tarnac, The Coming Insurrection made news here in the United States when Glenn Beck ran several segments on the book on his television show, proclaiming it to be “the most evil thing he’d ever read.” Spurred by Beck’s lambasting, a large spike in sales coincided with each one of his denunciations, and the book briefly reached #24 on Amazon. The days of Glenn Beck attacking the book are over, but the book remains relevant—as a quick Google search of the title will demonstrate.

In The Coming Insurrection, The Invisible Committee claims that, “movements do not spread by contamination,” but by ‘resonance’ between radical moments.” Shortly after the incident at Tarnac, as if to illustrate the theses of The Invisible Committee, the Occupy Movement began gathering at Zuccotti Park. The Occupy Movement, like The Coming Insurrection had its peak moment in the media spotlight when Glenn Beck scrutinized their motives, and lost coverage when Zuccotti Park was cleared. But, Occupy did not die; it lives on as does The Coming Insurrection, waiting for the next generation of intellectual agitators.