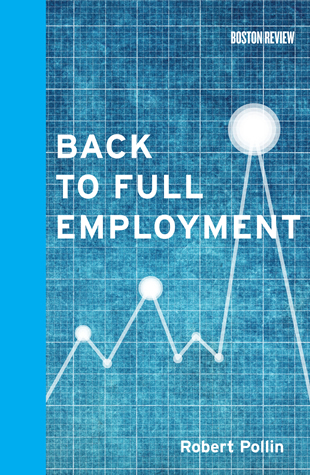 This week’s Election Tuesday post is by Robert Pollin, author of “Back to Full Employment”.

Pollin tackles the issue of job creation, claiming that the real discussion about rebuilding the economy around job opportunity creation will have to come not from the candidates, but from an engaged citizenry.

As a result of the 2008-09 Wall Street crash and Great Recession, employment conditions in the United States have been worse than at any time since the 1930s Depression. As of the most recent August data, the official unemployment rate is 8.1 percent. A better official measure&mdash;which includes people who have been discouraged from looking for work and those taking part-time jobs (sometimes very part-time) when they wanted full time&mdash;puts unemployment as of August at 14.7 percent. That is 23 million people, nearly double the combined populations of New York City and Los Angeles.

Based on historical experience, a U.S. president running for reelection would be tossed out by voters in the face of such disastrous employment figures. But polls show that President Obama is maintaining a small but firm edge over Mitt Romney, and that, if anything, the margin is widening with time.

In part, we can attribute this to both Romney’s ineptitude as a candidate and to the hard-right politics advanced by Tea Party Republicans. But even accounting for these factors, I would still venture that, while most voters do not believe that Obama and the Democrats offer anything close to a coherent plan for overcoming mass unemployment, they also understand that the Republicans with their full throttle embrace of an austerity agenda have even less to offer.

The situation was different during the 2008 Presidential campaign. At that time, Obama’s ‘hope’ mantra conveyed, if only vaguely, that he had a serious platform for counteracting the financial crisis and recession. The fact is, Obama did indeed have a plan and he managed to implement significant parts of it soon after taking office in 2009. His big initiatives were the $800 billion stimulus program and the auto industry bailout. For all their deficiencies, these programs did succeed to a substantial extent. The problem was that the full magnitude of the financial collapse was beyond what the Obama team had estimated (and, full disclosure, beyond what I myself had initially calculated). In addition, Obama gave himself little room to maneuver beyond these initial actions, primarily because he kept trying too hard to avoid offending the Wall Street crowd.

The moment cries out for serious discussions throughout the country on how to dig out of the ditch Wall Street has shoved the economy, and how to rebuild the economy around a commitment to creating decent job opportunities for everyone. Don’t expect to hear much about this during the rest of the campaign. The real discussion will have to come from the bottom up, from an engaged citizenry, pushing to create the foundations of a decent U.S. society.