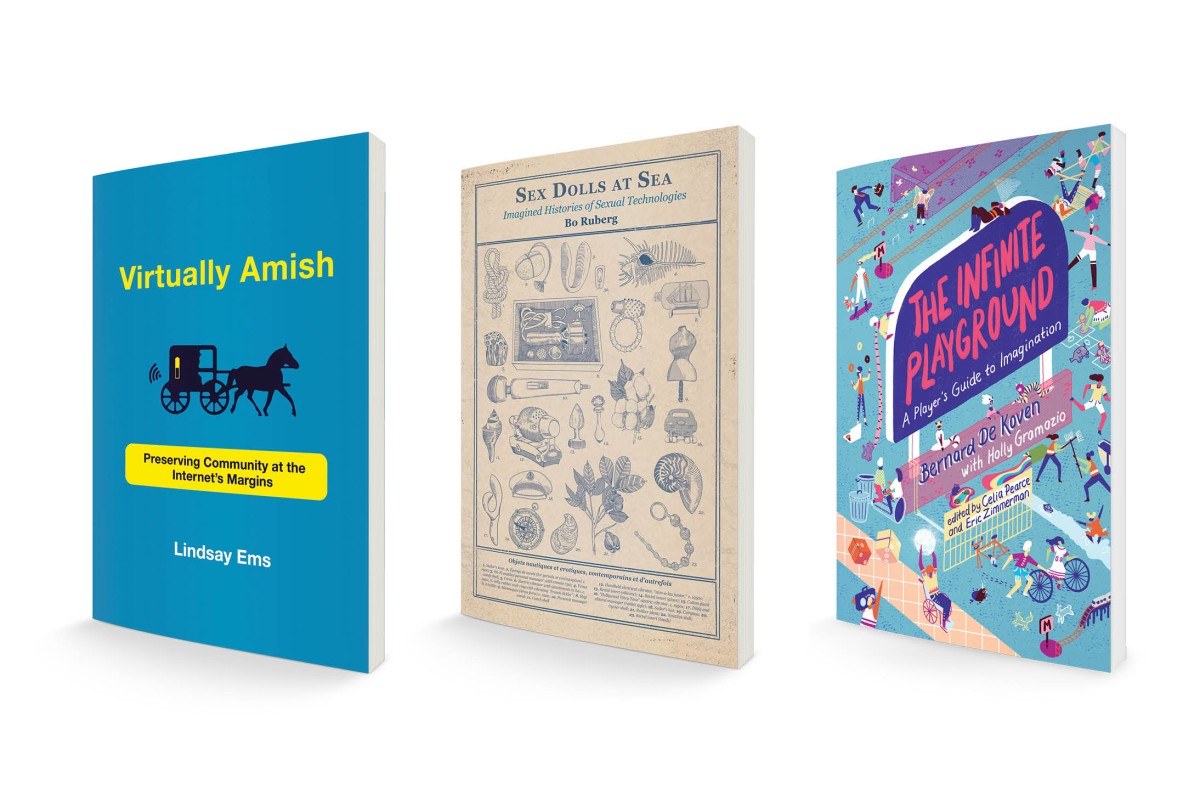 Explore a selection of our most anticipated new releases for June

This month: an exploration of how the Amish engage with digital technology, with lessons for the rest of us; a history of the sex doll; paperback editions of popular Press titles including The Infinite Playground by Bernard De Koven; and more. Explore these and a selection of our other new and soon-to-be-published titles below.

The Amish are famous for their disconnection from the modern world and all its devices. But, as Lindsay Ems shows in Virtually Amish, Old Order Amish today are selectively engaging with digital technology. he Amish need digital tools to participate in the economy—websites for ecommerce, for example, and cell phones for communication on the road—but they have developed strategies for making limited use of these tools while still living and working according to the values of their community. The way they do this, Ems suggests, holds lessons for all of us about resisting the negative forces of what has been called “high-tech capitalism.”

Now in paperback: The Infinite Playground: A Player’s Guide to Imagination by Bernard De Koven

Bernard De Koven (1941–2018) was a pioneering designer of games and theorist of fun. He studied games long before the field of game studies existed. For De Koven, games could not be reduced to artifacts and rules; they were about a sense of transcendent fun. This book, his last, is about the imagination: the imagination as a playground, a possibility space, and a gateway to wonder. The Infinite Playground extends a play-centered invitation to experience the power and delight unlocked by imagination. It offers a curriculum for playful learning.

“This book is magical, sacred, beautiful, and inspired. It will reintroduce you to mysterious joys of play you may have long forgotten.” —Jane McGonigal, author of New York Times bestsellers Reality Is Broken and SuperBetter

You might also like The Squares: US Physical and Engineering Scientists in the Long 1970s by Cyrus C. M. Mody

Now in paperback: Publishing Manifestos: An International Anthology from Artists and Writers edited by Michalis Pichler

Independent publishing, art publishing, publishing as artistic practice, publishing counterculture, and the zine, DIY, and POD scenes have proliferated over the last two decades. So too have art book fairs, an increasingly important venue—or even medium—for art. Art publishing experienced a similar boom in the 1960s and 1970s, in response to the culture’s “linguistic turn.” Today, art publishing confronts the internet and the avalanche of language and images that it enables. The printed book offers artists both visibility and tangibility. Publishing Manifestos gathers texts by artists, authors, editors, publishers, designers, zinesters, and activists to explore this rapidly expanding terrain for art practice.

Now in paperback: Life, Death, and Other Inconvenient Truths: A Realist’s View of the Human Condition by Shimon Edelman

“This work will be welcomed by any reader interested in the complexity of the human condition, and will especially appeal to students of the arts and literature, psychology, and ethics.” —Choice