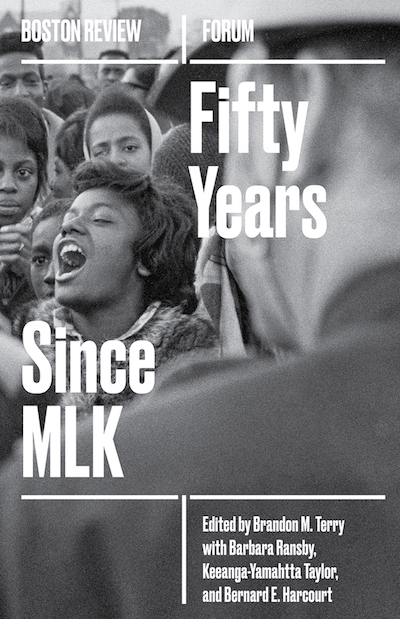 In remembering and re-engaging King, we must be attentive to his historical context and the people who surrounded him. King was not a solitary political actor, and his ideas were not his alone; they were a product of interactions with a wide and vibrant set of people and events that inspired, challenged, and altered his thinking. As Ella Baker put it, Martin did not make the movement, the movement made Martin.

Notably, fierce and formidable women were as much a part of shaping King’s worldview as anyone else. Chief among them was Coretta Scott King, a civil rights activist before she met King and a strong advocate for civil and human rights long after his death; she took a strong stance on LGBTQ issues when many of her generation remained silent. Other women who influenced King included Baker, a veteran activist and proponent of grassroots leadership; Dorothy Cotton, a dynamic strategist, organizer, and adviser; and Diane Nash, leader of the Student Nonviolent Coordinating Committee who later worked with King’s Southern Christian Leadership Conference, bringing her radical democratic sensibilities with her.

In addition to the influence of the women around King, we should also consider the poor and working-class people who surrounded King in the final years of his life, when he turned his attention to planning for the Poor People’s Campaign and speaking out against U.S. imperialism and capitalism. Terry begins his essay with a lesser-known King speech, delivered on February 23, 1968, in honor of W. E. B. Du Bois. I suggest we start a couple weeks earlier, on February 1, 1968.

On that rainy day in Memphis, two poor, black sanitation workers—35-year-old Echol Cole and 29-year-old Robert Walker—were riding in the back of a garbage truck when its faulty grinding mechanism malfunctioned. They were crushed, suffering painful, gruesome deaths. Walker’s young wife was pregnant at the time. The men earned 500 dollars a month, had no benefits or life insurance, and both families struggled to afford the burial costs. The deaths of Cole and Walker triggered a 64-day strike of 1,300 black sanitation workers in Memphis. King went there to lend support.

So, in recalibrating the legacy of King, we have to include men such as Cole and Walker. They too are martyrs of a different type, casualties of racial capitalism and the ravages of poverty and racism, the evils that King was so determined to combat, along with militarism.

Understanding King’s class context is especially important when analyzing his stance on the politics of respectability, and equally so for appreciating why the Movement for Black Lives rejects respectability politics. Terry asks us to reconsider a very particular meaning of the term that historian Evelyn Brooks Higginbotham had in mind when she coined it in 1993. However, here, too, context matters.

During the civil rights movement’s nonviolent sit-ins and boycotts, protesters presented a clean-cut image to garner national sympathy for the struggle. Low-wage workers, however, who lacked formal education, status, or title—men such as Cole and Walker—often could not or would not conform to the protocols of respectable behavior and comportment dictated by the middle class. To follow the rules in some cases meant to swallow their righteous anger. To dress and speak according to certain middle-class norms was to distance themselves from the communities that nurtured them. The exclusionary politics of respectability often put them outside the bounds of protected citizens or sympathetic victims. And patterns of protest did too. The Memphis struggle included militant rebellion by the city’s poor and working class, as well as orderly marches.

To his credit, King wrestled with the contradictions of preaching nonviolence to poor, angry young people forced to live in a violent world. In his famous “Beyond Vietnam” speech of 1967, King confessed: “I knew that I could never again raise my voice against the violence of the oppressed in the ghettos without having first spoken clearly to the greatest purveyor of violence in the world today—my own government.”

As Michelle Alexander argues, building on the work of prison abolitionists such as Ruthie Gilmore and Angela Davis, many poor black people who have been disproportionately victimized and villainized by the carceral state have been reduced to a permanent marginalized caste in our society. If you are a felon or a formerly incarcerated per- son (overwhelmingly poor and working-class people of color), you are socially exiled from “respectable” circles: excluded from voting, from certain professions, subject to added surveillance and housing and employment discrimination. If you are a woman, your sexual past and present practices also determine your status. And if you are queer, it is an uphill climb to be included under any circumstances. Yet these three groups—poor black people, women, and queer people—have been at the forefront of today’s Black Freedom struggle against state violence.

During the uprisings in Ferguson and Baltimore in 2014 and 2015, reporters and pundits often drew a line of demarcation between the “good” protesters, those who knelt in prayer, followed the rules, and went home before curfew; and the “bad” protesters, who broke windows, refused to disperse, and used profanity to describe the profane police violence. The latter group was in the streets the longest, refusing to back down, defying authority, and confronting the defenders of the status quo. These are the irreverent and implacable young people to whom Barack Obama preached calm and whom Bill Cosby mocked and maligned.

Embracing a black feminist praxis, this generation’s Black Freedom leaders have rejected the politics of respectability. They insist that the voices of black queer organizers be heard loud and clear, and that assertive women be honored within the movement. Rather than eschewing the marginalized and often maligned sectors of the community, the Movement for Black Lives’ organizers have prioritized them: arguing that those who suffer most from the policies of racial capitalism ought to be at the center of an agenda for racial justice.

For the most part, today’s movement has rejected a top-down, charismatic, male-centered model of leadership. But it has not forgotten King as much as Terry fears. In 2016 and 2017, the Movement for Black Lives marked the King holiday by calling on activists to remember the radical King, the internationalist King. In dozens of cities, local groups held vigils, teach-ins, marches, and rallies with that theme in mind.

Fifty years after King’s assassination, the most important corrective we can make, Terry rightly suggests, is to take King down from the pedestal. It is too narrow, too high, and too confining. And it distances King from the people and struggles that helped to define him.