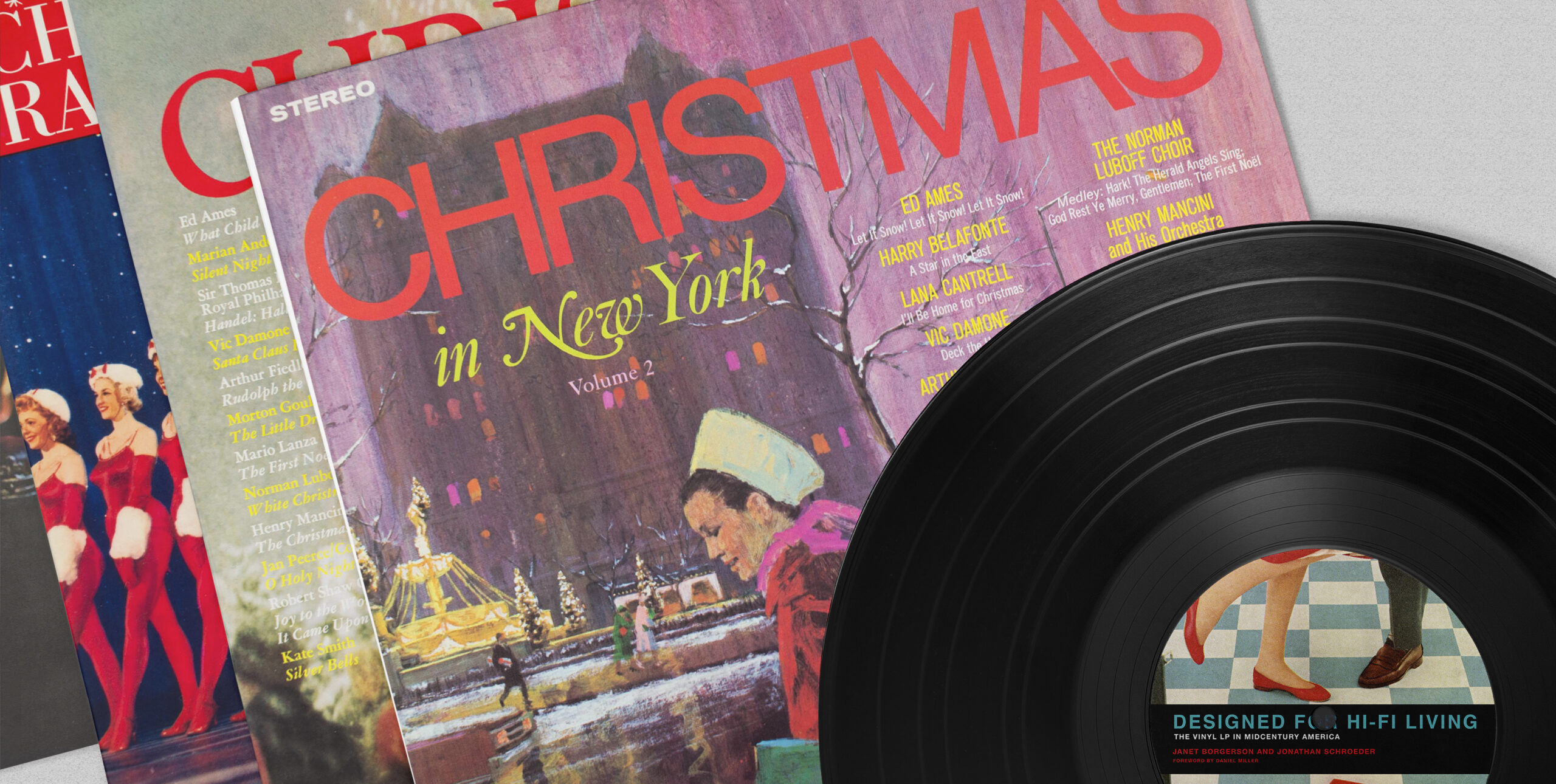 Midcentury vinyl records showcase New York City as an alluring holiday destination, with perennial attractions like the magnificent Christmas tree at Rockefeller Center, awe-inspiring department store windows, and the possibility of the perfect present from FAO Schwarz. At midcentury, New York City represented the height of US sophistication and cosmopolitan lifestyle. New York was the place to go for the best museums, the biggest retailers, and the latest shows including the Radio City Christmas Spectacular with the high-kicking Rockettes. 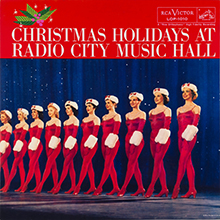 In our book, Designed for Hi-Fi Living: The Vinyl LP in Midcentury America, we discuss how record albums brought the world’s capitols, whether Beijing, Helsinki, Havana, or the US’s own Big Apple, into the family living room via the vinyl LP. Here, we introduce three classic record albums that promote New York as a delightful holiday destination. 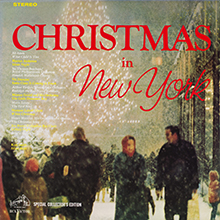 “To spend Christmas time in New York is a never-to-be forgotten experience,” chime the liner notes on RCA’s Christmas in New York. As with many things, the city manages to find itself right at the center of the holiday. The album presents a compact guide to spending Christmas in New York and attempts clever, or idyllic, connections to the songs: “Gotham is a gourmet’s delight! New York City restaurants are famous for their holiday fare. Perhaps talented Henry Mancini has these culinary treats in mind as he interprets ‘The Christmas Song’ which contains a musical description of ‘Chestnuts Roasting on an Open Fire.’”

The LP was issued as a “Special Collector’s Edition” in 1967, and gathered a greatest hits from other RCA Christmas releases, including Vic Damone belting out “Santa Claus is Coming to Town” and Marian Anderson’s beautifully peaceful “Silent Night.” Rockefeller Center graces the cover with a snowy, hazy, almost blizzarding, scene of shoppers in front of the “mammoth Christmas tree.” Rockefeller Center acts a bit like a town square for the US, particularly with the numerous television shows produced nearby; and the annual lighting of the Christmas tree has become a media tradition. 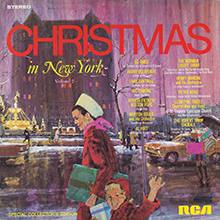 Christmas in New York, Volume 2, released in 1968, declares New York City to be “a giant melting pot in which eight million inhabitants try to find a common denominator. With such an endless variety of cultures and customs, being in New York at Christmastime is like taking a holiday tour around the world.” The record describes the diversity of New York as one of its greatest characteristics and a key element in the city’s Christmas festivities. Thus, the album’s liner notes paid tribute to the city’s diverse neighborhoods and the immigrant populations’ Christmas traditions, describing the German origins of the Christmas Tree; Dutch settlers and Saint Nicholas; Puerto Ricans and other Spanish speakers’ festive singing and dancing; as well as the staggering variety of international restaurants and specialty shops.

The album cover shows the fountain near Central Park in front of the Plaza Hotel. An impressionistic painted effect creates accents of snow and Christmas lights, and an odd prominence of fuchsia. Clutching wrapped packages and dressed in mother-daughter matching red coats, the central pair seem to have exited the FAO Schwarz toy store paradise; and the little girl waves back, perhaps, to the life size toy soldier standing guard outside the door, or to her father lagging behind.

These records offer a window into an optimistic midcentury vision. Then, as now, New York captures people’s imagination of the holiday spirit.

Janet Borgerson is Senior Wicklander Fellow, the Institute for Business and Professional Ethics, DePaul University. Jonathan Schroeder is William A. Kern Professor of Communications at Rochester Institute of Technology. Borgerson and Schroeder are coauthors of Designed for Hi-Fi Living: The Vinyl LP in Midcentury America.

All figures from the collection of Janet Borgerson and Jonathan Schroeder.

This article is crossposted from Medium.