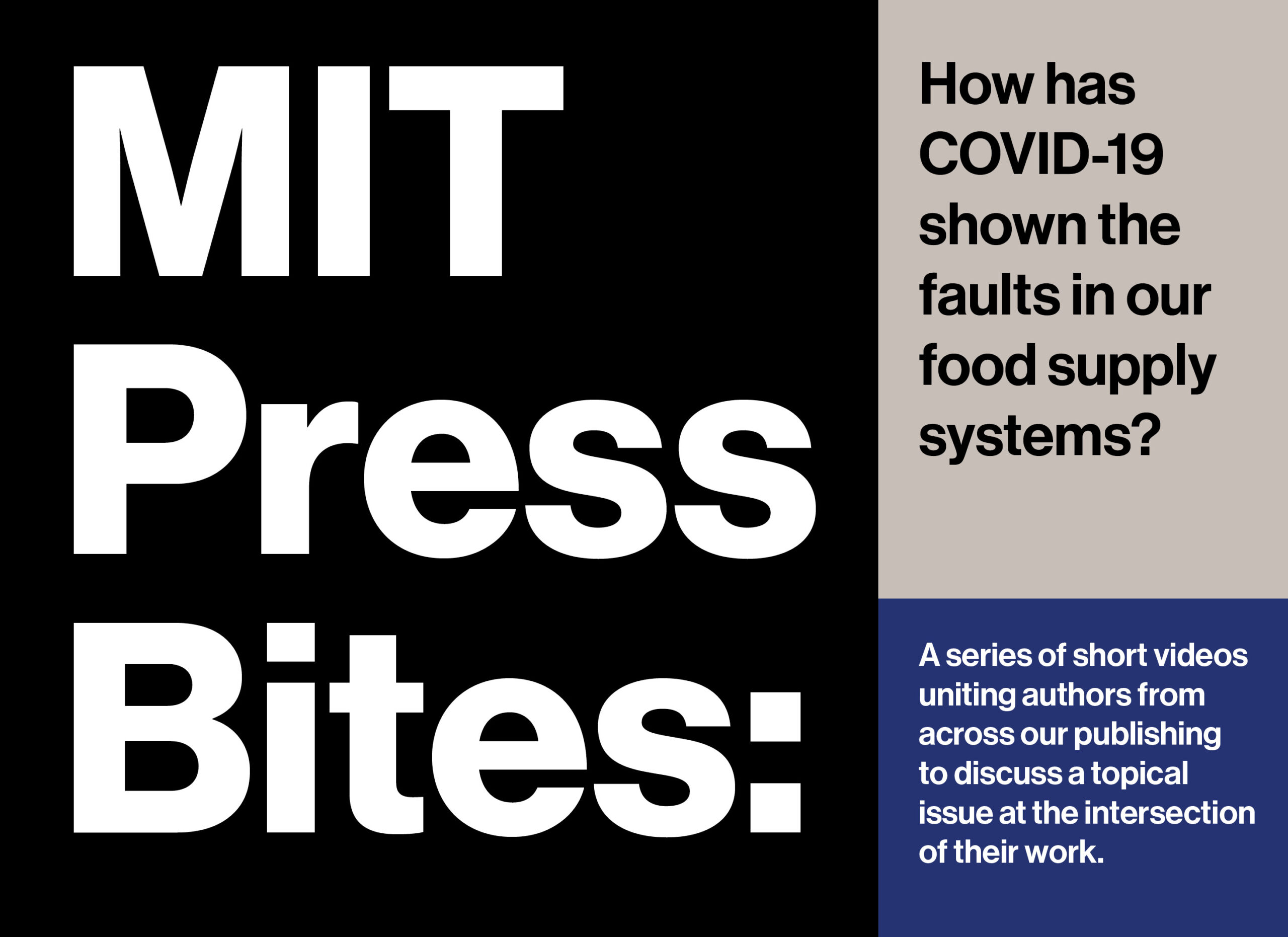 MITP Bites is a series of short videos uniting authors from across our publishing program to discuss a topical issue at the intersection of their work. Today, we discuss food supply

From #toiletpapergate to pasta shortages, the COVID-19 crisis has show the faults in our local and global food supply systems. We asked three MIT Press authors whose research and published works explore issues relating to food supply, including:

Transcript: What happens when a food supply system is hit by crisis?

Robyn: What we’ve been discovering is that when a crisis arrives, all of the weak and fragile points in the food supply chain surface. And I think this is actually a good thing because we’re discovering all those areas that are ripe for innovation, and this accelerates that change. We’ve had a food supply chain really since the Industrial Revolution – in small scale now and after World War Two on a larger scale – and it’s based on centralization and a concentration of resources. That sort of optimization is really being challenged now and we’re going to be seeing more distributed networks – more personalized, more adaptable. I think those all those algorithms are about to change, and I think this crisis really forces that to the forefront.

Josh: One thing that I’ve been thinking about a lot with the present crisis is that there are really two ways in which the food system figures. One is the role of the food system or a part of the food system and causing the crisis. The other is that the role of another part of the food system in mitigating it or in the response. In a way, these two roles are complimentary. One of the things that we’ve seen since early on is that it appears, it is almost certain, that the that food supply chain for animal sourced foods was implicated in instigating the pandemic, whereas what I’m hearing anecdotally, what I’m observing is that people in responding to the crisis at the household level are waking up to the fact that the food supply for plants for us foods is actually a lot more resilient, particularly with respect to the reduce needs for cold chain maintenance, and reduced needs for storage of fruits in intact forms as water based gels.

Laura: I would echo largely what’s been said, which is that what’s really happening is that the vulnerabilities of the food chain and the food system are very much exposed right now. People that have been studying the food system have been aware of these vulnerabilities for a very long time, but I think now, consumers and the public at large are really understanding the weaknesses and vulnerabilities that are there. Some of these have already been brought up – the part of the food system I focus on is labor, and food systems labor throughout the food chain. And what we’re seeing is while workers are being deemed as essential workers, they’re also suffering through this epidemic, with no health insurance, no basic sick leave policies, and these have been things we’ve been calling the alarm on for decades. They don’t have these protections while they’re essential, they’re consistently overworked and they’re not actually easily replaceable. That’s kind of a mytg of the food system workers, that they’re unskilled and that they’re very easily replaceable. And what we see is, that’s not true. Just last week for example, in South Dakota, we had over 200 workers at a pork processing plant test positive. That processing plant is now closed indefinitely and they provided 5% of the pork to our food supply. We’re not just putting new workers into that job, and these are vulnerable positions. We now see this huge vulnerability in our food system, and I think this is an opportunity to correct these really huge problems.

Robyn: There’s actually two situations that I think we can look at to learn from our past experiences. One is that in some of the hurricanes – Hurricane Sandy, Hurricane Katrina – what we saw were some public and private partnerships that really came together, that accelerated aid to these areas in crisis. You see companies such as, especially down here in Texas, HEB which is a big grocery change chain, Cisco Food Service Company, Walmart and Costco were using their facilities at scale, to be able to engage a redirection of the supply chain and the reordering of what they actually carry in store. So I think the public and private partnership lessons are good. The other thing that we’re seeing, and I think this is reassuring, especially when it comes to workforce considerations, is that we’ve had this idea that technology is coming along to really save the food system, among other systems, and I think that what we are seeing now is how much more development is required on those levels. We aren’t seeing robots deliver food, right now we aren’t seeing personalized medicine, but we are seeing that humans are incredibly important and do have a place in feeding us and will in the future. That’s reassuring, and I think it’s a great challenge for us moving forward how we integrate technology, while still leaving the human face in our landscape.

Josh: One of the key issues for me as far as drawing comparisons, one of the difficulties in drawing comparisons, is that, when you’re talking about causes in the supply chain of an event like this, is that so much of the information about how food moves from source to consumer, from producer to consumer, over elongated valued chains is closely held, particularly when you’re talking about cold chain. It’s very difficult to get information even about how much energy is involved in maintaining a cold chain for the same meat or fluid, let alone the hygienic procedures for control of livestock interaction with humans and livestock with wild animals. These are all concerns that have arisen at various points over the past 20 years and received flare-ups of media coverage but have failed to be addressed systemically, and they interface with the labor issues that the other panelists have raised, particularly because it tends to be marginalized and poorly paid communities who are most affected, both the at the production end and all along the value chain up to the point of distribution to the final mile.

Laura: I’d say that labor hasn’t suffered from such an overarching crisis such as this one, but we do know that it’s been vulnerable to political swings and volatile and politicized border policies for decades and even centuries, during times of crisis that affect the food system, especially when there’s a perceived labor shortage and a higher demand of food, which is in the context of wartime really, when when you’ve seen similar kinds of crisis, and what we’ve historically done is lowered labor and safety standards. So this was the Prospero program which was born out of World War Two labor shortages, or the perception that people wouldn’t go work in the fields and what we actually are seeing is the same thing happening right now with H-2A program and with the guest worker visa program. We actually have seen that the White House has called to lower farmworker pay during the crisis. This just happened again last week. As well as lowering the border, the barriers to agricultural worker visas, which, again, is very dangerous and increases the vulnerability in the food system overall. So what we’re seeing is some of the mistakes, historically, are being repeated right now in terms of food systems labor in the context of crisis.