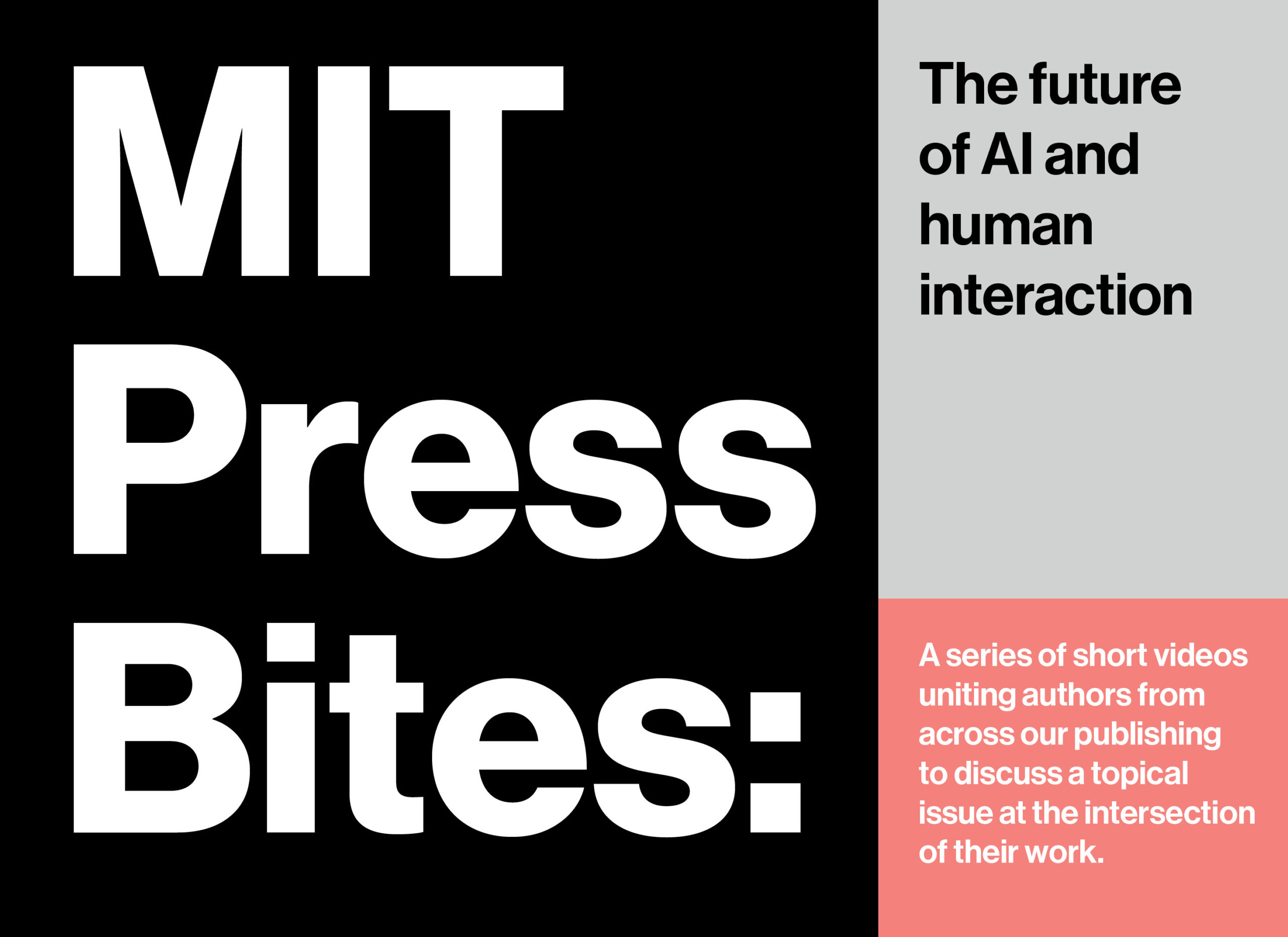 MITP Bites is a series of short videos uniting authors from across our publishing program to discuss a topical issue at the intersection of their work. This time, we tackle AI

There’s a lot of speculation on how developments in Artificial Intelligence will affect humans in the future. We talked with three MIT Press authors whose research focuses on AI and asked them to tell us about how their new books address this issue:

Transcript: In a few words, what does your research say about the future of how AI and humans will interact?

Mark: My book shows that robots are quite different from computers without bodies and the importance of having a body really makes a difference in human interactions. And the idea is that robots in future will have an understanding of their self and be able to have a subjective view, so that they can correspond with people and understand histories, common objects, common environments, and have much better conversations than we can do with computers nowadays.

Isabel: My book explores how embodied computing devices will implicate humans in new data spheres and how AI algorithms will become more blended with us and our lives, whether we wear technologies ingest them, implant them, or live in ambient interaction with them. My book grapples with human adaptation to tech and the global actors that are behind it.

Edward: There are many books out there that are predicting a runaway explosion in the capabilities of AI’s resulting in dystopian scenarios with humans being side lined and outgunned. My book looks at a different scenario, though not necessarily one that’s less scary. The central theme in my book is that the machines and humans are both coevolving. The humans are changing as well as the machines and humans have always changed, along with technology, of course, but it’s happening a lot faster than it has historically, and because of AI it’s messing with our minds.

Transcript: Would you call yourself a techno-optimist or not, and why?

Mark: I’m broadly optimistic about future of AI because I take an engineering perspective, I don’t have problems with the engineering side, but of course the technology that we… the digital world that we live in is not very well managed as we know from many problems and AI is subject to the same problems. But the real issue, I feel is the difference between machines and humans and we don’t take enough cognizance of that and the book brings this difference out.

Isabel: I think of myself as a techno-realist more than an optimist and one who studies the future through the mundane decisions made by people in the present. For me AI represents a category of very specialized technologies designed to perform actions that humans can’t do, giving it a sort of powerful ethos. But the issue then is that it’s treated by governments, and by companies, and the public as if it’s a belief system and a belief structure and even an ideology that can govern future actions. And so it’s subsequently used to justify itself before we think about the implications and the human rights issues, so I’m mostly interested in unpacking the consequences of that kind of techno-futurism

Edward: My book is generally optimistic, but not in the sense that technology can solve all of our problems. The reality is that technology creates new problems even as it solves old ones. Pessimists typically expect competition between humans and machines, but I talked about coevolution, where the humans in the machines evolve together. Whereas pessimists typically expect that humans will lose control of the machines, I argue that we never actually had control of them. This in fact could be one of the more provocative arguments in my book. But nevertheless, I believe it’s more likely that our relationship with machines will remain synergistic. We will continue to need them, they will continue to need us. But a word of caution in a coevolution all partners change. It’s almost certain that many people will not like what humans become.