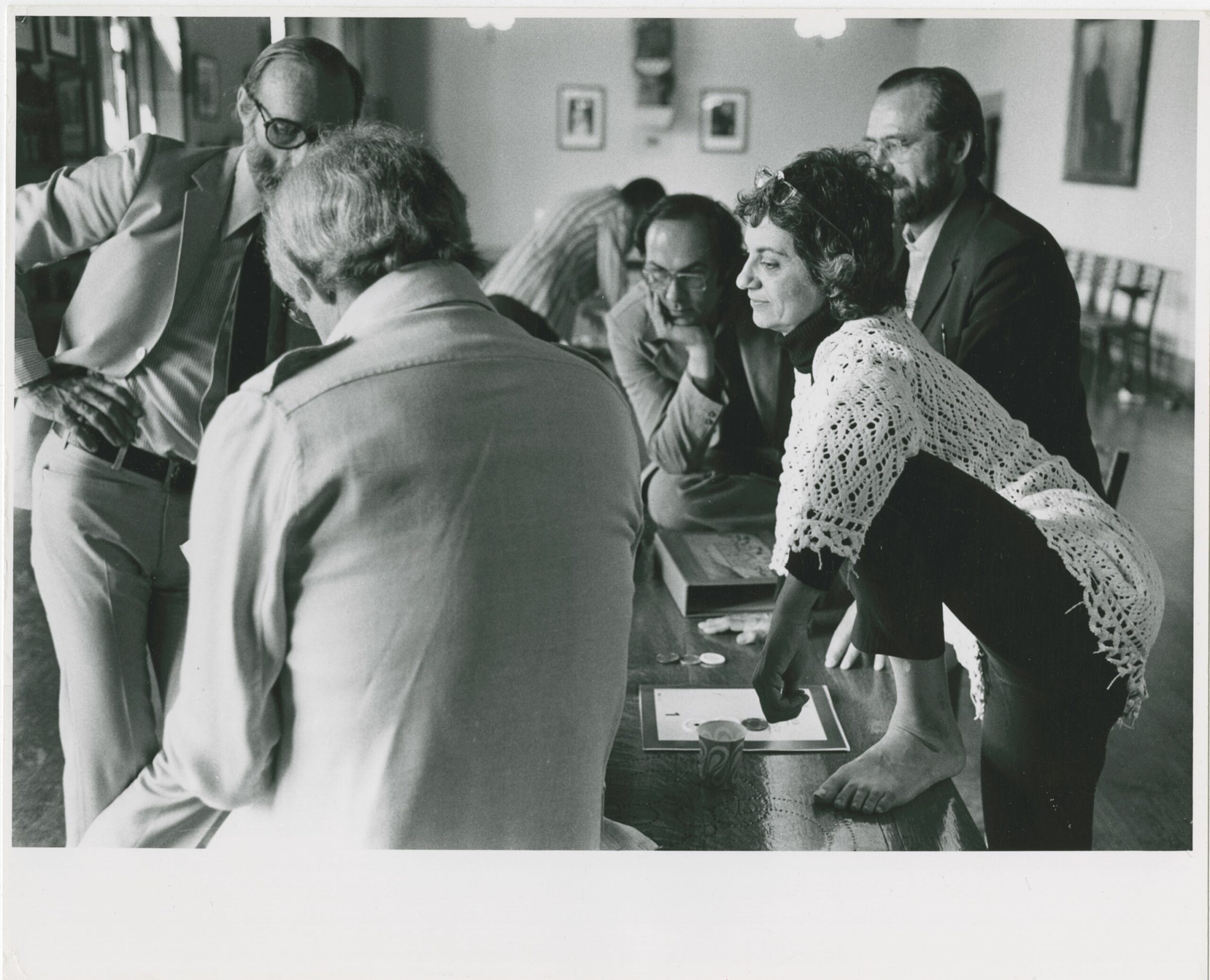 It’s quite a picture. A woman stands in profile, bent forward and conferring with four men around a table. They are in suit and tie, she wears white macramé over a black turtleneck. The mood is serious, attention focused on something before them but out of our view— probably something she is presenting. And one other detail: Her bare foot is planted squarely on the table.

The woman is Muriel Cooper, and the setting is MIT in the early 1970s. Cooper, then design director of the MIT Press, was likely presenting a publication of her design, or one produced under her supervision. David Reinfurt and I found the photograph in the archives of the Massachusetts College of Art and Design, Cooper’s alma mater. And the scene wasn’t exceptional. It was a habit of Cooper’s to remove her shoes in meetings, both as a matter of comfort, and of power. In the 1980s, when her graphics research was sponsored by big corporate dollars, colleagues recall that conference rooms of suited company men would fall silent when she shed her shoes, a prelude to her controlling the meeting. It was also Cooper’s first move upon taking the stage and being seated in the early days of the TED conference, namely its 5th edition in 1994— also the year she died unexpectedly, her research still full of promise.

Cooper’s career at MIT, over four decades, was a series of firsts. She was the first art director of MIT’s Office of Publications in the 1950s, where she visualized new scientific research and designed everything from brochures for courses on “transonic aerodynamics” to record album sleeves for classical music concerts at the Institute. In 1967, she became the first design director of the MIT Press, creating both a more efficient publishing program as well as now-classic volumes like The Bauhaus (1969) and Learning from Las Vegas (1972). In the mid-1970s she co-founded a program for experimental printing and new techniques in photography and video, housed in MIT’s Department of Architecture, and called the Visible Language Workshop. And in the 1980s, Cooper was a founding faculty member of the MIT Media Lab, where she explored the digital interface, and became the first woman tenured. Each step of the way, she invented new roles for herself, constantly embracing problems that excited her. As she said, “I get bored very easily.”

Cooper did not fit naturally within the culture of MIT. She was a woman surrounded by men; an artistically trained designer among technically minded architects, engineers, and computer scientists; and a loud-dressing and -talking Jewish woman in a world of buttoned up white men. If she made it look easy, it’s not because it was: In a late interview with Janet Fairbairn, an MFA student in graphic design at Yale, Cooper counted the ways in which she was the odd one out, and observed: “There is plenty of baggage that goes along with that position.” She added, in a candid moment: “It is awful being a woman in that kind of environment, and you just kind of have to move along.”

Cooper kept moving, working nonstop. But she also pulled countless women up along with her. She taught and mentored scores of female students—whether undergraduates fulfilling a humanities requirement or graduate students doing sponsored research; she hired women in her design studios, and she published them at the Press. More than authoring unique objects as a designer, or even thinking of herself mainly as a technological innovator, Cooper came to see her contribution as cultivating environments— for experimentation, creative production, and self-expression. “My personal statement,” she once said, “is in building environments in which I would like to work and other people can work productively.” And her pedagogy suggested her politics, likewise embodied in her preferred format of the “workshop.” As she once listed in a draft C.V., under “Interests and Goals”: “The significance of participatory and non-authoritarian communication forms in relation to specialization and professionalism. Structured/unstructured relationships in learning. Direct, responsive means of production.” The work of cultivating environments and students can be seen as administrative, affective, and reproductive labor—and missed or minimized as such, especially relative to patriarchal models of authorship, authority, or virtuosity—but it’s precisely what made Cooper’s impact so great. When the AIGA (American Institute of Graphic Artists) granted its design leadership award to MIT in 1982, and named three groups within it, and the three women who led them—Design Services and Jacqueline Casey, the MIT Press design office and Sylvia Steiner, and the Visible Language Workshop and Muriel Cooper—it was acknowledging a design culture Cooper had helped to build, and the women she had helped to empower.

Cooper remains little known. She often worked out of public view and on collaborative projects; what she did was complex and escapes easy definition as graphic design, a field whose boundaries she helped to expand; and she died unexpectedly and at the threshold of important research. And she was a woman— which made her work less likely to be taken seriously in the male-dominated world of technology and design, then as now. David and I were surprised (and pleased) to see the large trim size of our monograph on Cooper, which stands up to her major book designs on a shelf. At the same time, we were wary of the risk of giving visibility to one figure in particular, in a collaborative moment, and appearing to minimize others in the process. After all, Cooper was not herself a meticulous graphic designer, a technological wizard, or a singular genius working alone; rather, she took inspiration from all around her, and relied on the help of many others, whether better trained typographers or leaders in machine learning. Cooper’s contribution was to help build a design culture at MIT, to build up those around her, and to see potential where few others did. Our book, focused on her work, and that of her students and colleagues, testifies to that. History could use more big books on women.