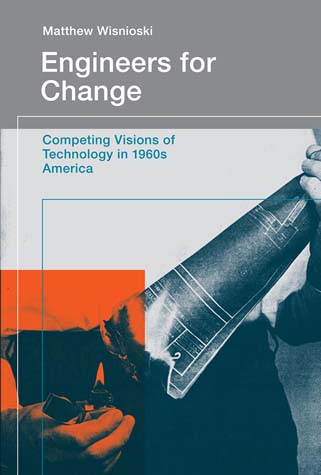 In your American Science blog post, “Change or Die!,” you talk about how the unified ideal of Innovation and a select few became a change manager. In today’s context, what ideal has evolved to unite a group and become a change manager?

The “change manager” is alive and well. You can take classes to be one. But as a unifying identity, the qualities championed by late-60s pioneers now are embodied in the “innovator.” To be an innovator is to be an entrepreneur who is part artist, part designer, part scientist—someone who collaborates across disciplines and professions to contribute to the social good through market solutions. It is to embrace an “ethic of change” that accepts the inevitable dislocations generated by technology and posits techniques for thriving in that world. We can see it in self-help books such as The Innovator’s Toolkit and The Innovator’s Cookbook, and in programs like the National Science Foundation’s Innovation Corps (I-Corps) designed to instill a new kind of expertise in a new generation of engineers and scientists. How this idea spread from the 1960s to today is one of the big questions I encountered when finishing Engineers for Change, and I’m now at work on a second book called Inventing ‘Innovators’ that looks at how the virtues of innovation became so closely linked with what it means to be a successful engineer or scientist.

During the Arab Spring, we saw many youth groups using social media to orchestrate protests and revolts. Do you see this as a natural result of Brand, Fuller, and McLuhan’s work to identify technology as a tool for democratic liberation?

Do books cause revolutions? Is the whole world watching? Does Twitter topple dictators? We have been asking these questions since the French Revolution. Like many people, I followed the Arab Spring through social media sites and American blogs. I was deeply impressed by what this technology made possible and how it was used to mobilize the world’s attention. Social media has been an extraordinary disruptor of the politics of information, dramatically expanding who gets to speak and what messages can and cannot be controlled. Sure, we can see a lineage to 1960s visions of democratic liberation through technology at play in the Arab Spring. But, as Fred Turner writes in From Counterculture to Cyberculture, there is a quality to this view that assumes politics are unnecessary to the inevitable freedom brought by new media. Without tens of thousands of people willing to put their bodies on the line in public squares, the green revolution never would have happened. The resultant governments, moreover, are being determined as much by old-fashioned interest politics. Lastly, for every story about libratory media, we can find stories about how Internet companies have accommodated themselves to non-democratic regimes. Why not instead ask: “Does the fact that Mark Zuckerberg once described Facebook users as ‘dumb f**ks’ for trusting him with their data prove that Herbert Marcuse was right?” The take home point to engineers who develop these tools is to recognize the extreme interpretations and to apply them when making design choices about access, anonymity, and control. Be wary of “a natural result.”

How important is an organization like Engineers without Borders in fostering a sense of responsibility and action amongst the industry members?

EWB-USA did not exist when I started writing Engineers for Change; it now has 12,000 members. That is remarkable. Its contribution to a sense of responsibility among engineers cannot be overstated. It generates excitement on college campuses; corporations provide support through altruism or the desire for good press; hundreds of projects have worked. EWB-USA is not, however, without critics who question the success of engineer-centric social action and a student base of short-term “technocratic” interventions. EWB-USA reminds me very much of Volunteers for International Technical Assistance (VITA), which emerged in the 1960s and became linked to the possibility of remaking engineers as humanitarian servants for the developing world through “non-political” action. Like VITA, I think that as EWB-USA has matured as an organization, it is recognizing that achieving sustainable solutions starts with “community-driven” programs that are as much about addressing cultural and political dimensions as technical ones.

The first four of fourteen “Grand Challenges for Engineering” formulated by the National Academy of Engineering concern energy and environment. These are great political issues of our time. “Sustainability” has become the framework for addressing them in engineering and beyond. In much the same way as “responsibility” did in the 1960s, “sustainability” is a word applied to vastly different ends including solar energy, nuclear fusion, and geo-engineering. When terms ascend to this status they risk being hollowed out of meaning. Nonetheless, there have been significant methodological and technical advances in multiple domains of engineering under the banner of sustainability. Engineers, as well as many political commentators, are betting on technical solutions because they’ve watched the failures of governments to reach solutions.

The concept of social justice is harder for the engineering profession, especially with respect to issues of energy and environment. Because social justice implies moral rights that cannot be quantified or even legally adjudicated, social and cultural dimensions of social justice get expressed in terms of economic and regulatory trade-offs when discussing solutions to environmental challenges on the global scale.

As for the second part, I’m not sure engineers will exert political or social judgment in robotics and additive manufacturing (3D Printing), though I think there is a pressing need to investigate such dimensions. Engineers have contributed to the progressive ideals of these hugely consequential developments that are in their infancy. Will engineers play an equal role in addressing the political entanglements and future extensions of these technologies? Robotics in particular puts the moral dilemmas of engineering front and center. The civilian benefit of robotics is enormous, but the driving factor is warfare, specifically the possibility of autonomous and ubiquitous control through action at a distance. What is the engineers’ responsibility in weapons-making? The question is as old as the profession, but when the goal is autonomous technology there are qualitatively different implications. This issue haunted critics of technology in the 1960s.

Is there a new battle in today’s engineering world? Does the struggle to assert the political and social relevance of engineers continue?

Battle is too strong. Still, new organizations such as Engineering, Social Justice, and Peace (ESJP) have rekindled debates about the corporate and military orientation of engineering. As in the 1960s, ESJP is shaped in response to war (Iraq and Afghanistan) and borrowing from critical intellectuals (postcolonial theory and critiques of neoliberalism). Others such as the now defunct Scientists and Engineers for Change, which addressed the “manipulation” of climate science in the Bush Administration, enter debates with a “non-partisan” strategy. These organizations will not upend mainstream engineering, but they are shifting how the establishment views itself and addresses problems. At the broader level, the past two decades have brought introspection about national engineering priorities in response to globalization as well as the limits of the title “engineer” in an information economy in which other professions claim ownership for technology. From the perspective of professional leaders, we face crises that demand a coordinated response and educational reforms to meet new grand challenges.

The long view is helpful here. Historian Ken Alder wrote of the origins of modern engineering in France that: “Engineers were designed to serve.” The same applied in Cold War America. The same is true today. Engineers at all times and places have been trained for particular societal goals, and those visions almost always have been challenged. It is important that engineers and engineering students know this. The emerging field of Engineering Studies teaches that struggles of political and social relevance are inherent to being an engineer.