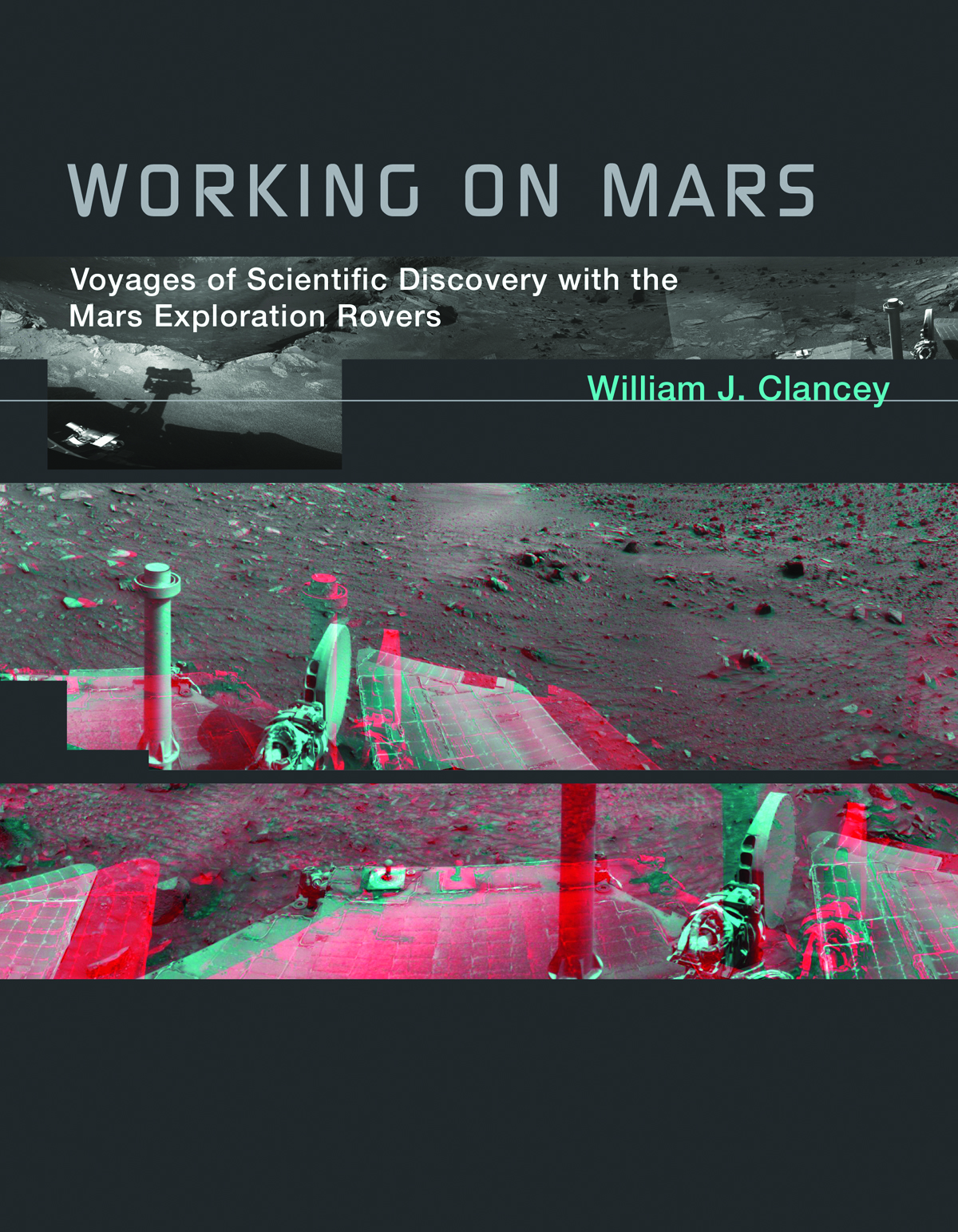 Our first post for National Robotics Week was a guest post from the author of  Robot Futures, Illah Nourbakhsh. The second post is a Q & A from Working On Mars author William Clancey. This is the first of two posts.

How has robotics revolutionized space exploration?

In terms of scientific exploration, programmed, mobile laboratories like MER (Mars Exploration Rover) have demonstrated that is it is possible for scientists to do field science on another planet. This is a remarkable achievement that wasn’t even fully realized as something we could do a few decades ago.

In some respects, many people didn’t realize what MER would enable because they had narrow views of robotic systems, usually as either replacing people (as if they were exploring without us being involved) or as being “collaborators” (like friends who joined our team). Neither view is possible anytime soon—or necessarily desirable.

Both perspectives—robot as replacement or as a collaborator—come from artificial intelligence and science fiction, in which the dominant vision has been a robot with fully human intelligence. So it might be said that MER has in some respects revolutionized our understanding of what a robotic system can be. Rather than replacing people, MER became a way for more scientists in different disciplines to work together in exploring Mars.  MER could be said to be a collaboration tool that allows scientists with different perspectives and interests to participate in the investigation and contribute to the interpretative analyses.

By enhancing scientific collaboration, MER and other planetary spacecraft have promoted an interdisciplinary, systems perspective for scientific understanding of planets. For example, rather than a geologist or an atmospheric scientist working alone in the field, MER scientists investigate Mars together in a large team. They relate observations of the atmosphere and surface (as well as analyses from spacecraft orbiting Mars) to develop an integrated, historical perspective about how Mars developed as a planet and how its climate changed, and how materials are distributed over Mars today. This systemic view of Mars assists interpreting features in different regions (e.g., relating the chemicals found in soil in the martian arctic to the clays at Gale crater) and provides a holistic view of “habitability,” the possibility that life evolved and might still exist Mars, which is the focus of our investigations on Mars today.

Robotics enters into this story at another level as well, in the instruments themselves. Understanding the nature and history of planetary surfaces requires several kinds of chemical and atomic analyses, involving lasers, cameras, “wet labs,” and ovens. The complex programmable instruments that carry out these analyses are themselves robotic mini-laboratories, that follow precise programs the scientists “upload” into the rover’s or lander’s computers for collecting, preparing, processing, and measuring samples. (To learn more about robotic instruments, see http://msl-scicorner.jpl.nasa.gov/Instruments/)

Finally, reliable robotic systems that can operate in extreme environments over multiple years—without repair or even oiling the parts (unlike our automobiles!)—have allowed scientists to investigate areas more thoroughly and deliberately. For example, Cassini’s robotic instruments in orbit around Saturn have been reprogrammed since 2004, allowing repeated, incremental investigations of the rings and moons of Saturn. We can fly by a body or region of interest, scan, analyze, then go around again for another view—closer or with different lighting or perspective—and study features in new ways.

What were some challenges in operating the MER? How were they overcome?

Landing safely on Mars was probably the greatest operational challenge, accomplished by the computer-controlled navigation, aerobraking, parachute, and airbag system.

The domineering practical challenge of operating a rover on Mars is keeping it alive day by day, which means managing power and memory especially to work within the resources available. This entails monitoring and tending the batteries charged by solar panels, as well as planning generation and transmission of images and other data to fit within the available memory and bandwidth.

In this regard, a design shortcoming in memory management caused Spirit to become crippled within the first month in January 2004. The problem had to be diagnosed and MER’s operating system upgraded – all from Earth, without losing our ability to communicate with and control the rover.

The MERs were not really expected to be operated more than a few months or survive the first winter.  But both rovers operated for years, and Opportunity is still working after a decade, using its abrasion tool, taking microscopic and panoramic images, and doing atomic spectral analyses (APXS). The operations challenges behind this accomplishment have included: parking the rovers at the appropriate angle to maximize the solar power during each winter on Mars, using a special program when the Sun is between the Earth and Mars preventing communication about every two years, diagnosing and working around hardware problems such as stuck wheels and heater failures. Plus we have been lucky—dust devils on Mars have cleaned the solar panels (though images of Opportunity panels today are scarily red).

But all I have described concerns the engineering perspective of operating MER. The scientific operations themselves are another matter.  The scientific work of a rover mission can be characterized in terms of long-term campaigns (e.g., going to and investigating a crater or local landform over several years, such as our work with Opportunity at Cape York on the rim of Endeavour Crater) and short-term investigations (e.g., studying an outcrop for a few days or weeks, such as our work with Curiosity at a drilling site).  So scientific operations focus on relating the interesting features to the available instruments/analyses to characterize the surface forms and materials and answer the scientific questions about their nature, origin, change over time, and possible relation to habitability. Effectively, science operations is carrying out an expedition on Mars over several years, doing field science.

A repeated operations issue for scientists is weighing how long to devote to any particular area and when to drive on to explore new, perhaps obviously enticing areas. Often plans are set aside and we don’t continue driving until we understand exactly what we have encountered (at least to our best ability with the instruments at hand). This requires relating data from multiple instruments or sampling again nearby, leading to much discussion within and between the different scientific disciplines and instrument teams.

Given the longevity of the rovers, strategic planning has been important and challenging in the MER missions. The scientists are markedly thorough: Rather than being like a child at a museum flitting about from one flashy place to another, the MER team has patiently studied each outcrop, strange rock, crater layers, spherules, etc. before moving on. Today in Gale Crater this same style had led to wondering when we will begin climbing Mt. Sharp and what the pace will be like.  Might it take ten years to reach the peak?

As an example of the strategic challenge of science operations, the Spirit team agonized over how long and how to explore Home Plate behind the Columbia Hills near where the rover landed. This plateau-like region has such promising geological features, suggesting ancient geothermal activity related to volcanism, that several years were devoted to studying an area the size of a few soccer fields, rather than moving on to nearby areas that from orbit appear interesting and remain unexplored today. Yet again, all of this was “bonus science,” far beyond explorations we thought we might accomplish, given the original objectives of the original ninety sol (martian day) missions of Spirit and Opportunity.