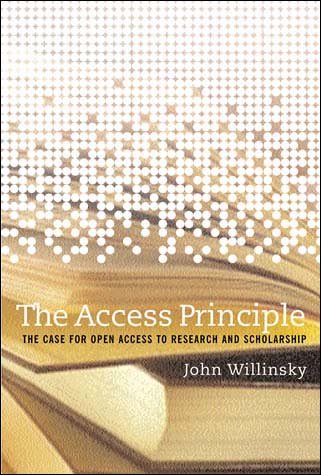 Open Access Week (Oct 22-28, 2012) provides an excellent time for a little reflection on the state of our access to research and scholarship. While some of us had been hoping for a digital revolution in access to research and scholarship that would suddenly and fully turn this entire realm of learning into a vast public asset, we are coming to accept that, instead, a series of evolutionary forces are underway, at least when you look at things as a matter of a decade or two, rather than over eons of time.

The evolutionary markers, well worth celebrating this year, are found in the growing acceptance of open access as a guiding principle for scholarly communication. The markers include the gradual increases this year, to over 8,000 journals, in the Directory of Open Access Journals, and the 250 open access mandates among universities, departments and institutes included in ROARMAP. Also notable, perhaps as more of a moment of punctuated equilibrium in this evolution, is the first open access journal from the American Psychological Association, with a lovely retro title, Archives of Scientific Psychology, which will also feature, according to its editors, open data sharing and open reviews. MIT Press has also been among the publishers experimenting with open access approaches to journals and books.

Another relatively recent source of open-access innovation comes from the rise of mega-journals, following in the footsteps of  PLoS One, (with roughly 14,000 articles annually), including the Nature Publishing Group, with Scientific Reports, the Royal Society, with Open Biology, and from the British Medical Association, BMJ Open. The mega-journal, tapping the article-processing-fees model, forms a notable instance of where this move toward open access has led to a new publishing principle affecting scholarly communication. By publishing on the principle that the peer-reviewed competence and contribution of a paper should be sufficient to warrant immediate publication in the digital age, given no real restrictions on journal size (compared to print) and the sheer epistemological inefficiencies of a highly discriminatory journal hierarchy.

As Phil Davis points out, the mega-journal model raises equity issues for authors and may disrupt non-profit society publishing. The cautions are well-noted, but still it is hard to resist, having wished and worked for this increased access, concluding that an irrevocable evolution toward this opening of research and scholarship is underway. But then a moment’s reflection reminds one that the Royal Society of London was behind such an opening from the very beginning of journal publishing, if perhaps without the business acumen that it may now be showing.