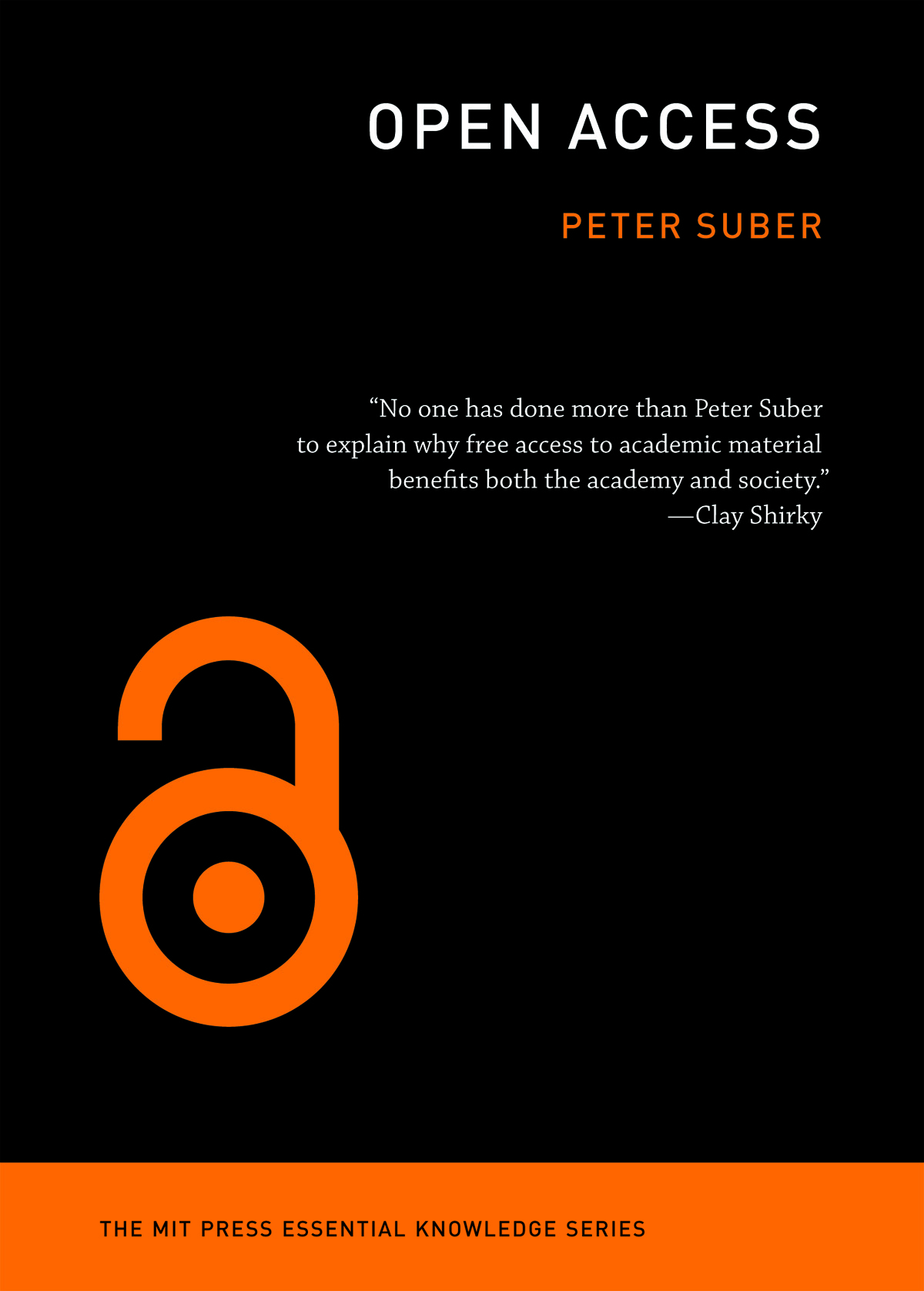 MIT Press asked me to write a guest blog post on my book, Open Access, and I’m glad to oblige.

The book came out in June 2012, and became open access (OA) in June 2013. MIT Press doesn’t routinely make its books OA, and I’m grateful that we were able to negotiate OA for my book. Beyond merely allowing OA, the press produced four different OA editions, in PDF, HTML, ePub, and Mobi (Kindle). Once the book was OA and people were free to tinker with it, the Internet Archive produced four additional OA editions, in Daisy, DjVu, plain text, and streaming formats.

I feel very lucky that my book has such a handsome and inexpensive paperback edition, and such a range of useful OA editions.

Soon after the paperback appeared in 2012, Georgia State University bought copies for every new faculty member and administrator. Similar but less comprehensive giveaways took place at Cornell and Harvard. I wanted the book in the hands of every academic, and I’m moved by the fact that some other academics had the same idea.

(I had no role in the decision to give away copies at Harvard. I asked the Library to keep track of how many copies it bought for this purpose, and I donated the royalties on those copies to Creative Commons.)

The book is part of MIT Press’ “Essential Knowledge” series of “short, accessible books on need-to-know subjects.” It’s certainly on a need-to-know subject, and it’s certainly accessible, in at least in one sense and at least now. But this is a good place to confess that it should have been shorter. I exceeded my word count in order to add more documentation than short books normally allow. This was important to me because OA is still widely misunderstood, because too many discussions still let too many errors pass for truths, and because, overwhelmingly, the evidence supports the case for OA. The book has 41 pages containing 153 small-font notes. I thank the press for letting me include them all.

I submitted my manuscript in the spring of 2011, which means that the text was already a year behind when it appeared in mid-2012. It’s the fate of non-fiction books to start falling behind the day their text is final. But I didn’t want that fate for my book, and I didn’t want to avoid that fate by writing new editions every few years.

Instead, I launched a book home page for updates and supplements to keep the documentation current. Today the page has 198 new notes supporting 88 assertions. Together the new notes come to about 9,000 words, or 20% of the size of the original book. All the updates are OA, and the collection is still growing.

In effect, each assertion in the book is now a hook on which I can hang new evidence as it emerges, creating a perpetually updated series of public footnotes documenting major propositions about OA. In December 2012, I wrote an article generalizing this idea and recommending it as a useful new structure for research publications in the digital age.

The book home page not only hosts these updates and supplements. It also links to the OA editions and to all the reviews I’ve seen to date. As translations appear, I’ll link to them as well. Today there are translations under way into Chinese, French, Greek, Japanese, Polish, Serbian, Spanish, and Turkish.

I’m especially happy about the advent of these translations, which will spread the message to researchers and language communities I could never have reached through the English original alone. Science and scholarship are international, and access to them ought to be international as well. Note that most of these translations depend on the freedom to create derivative works built into the open license on the OA edition. This is an obvious but fitting sense in which OA directly helps spread the word about OA itself.