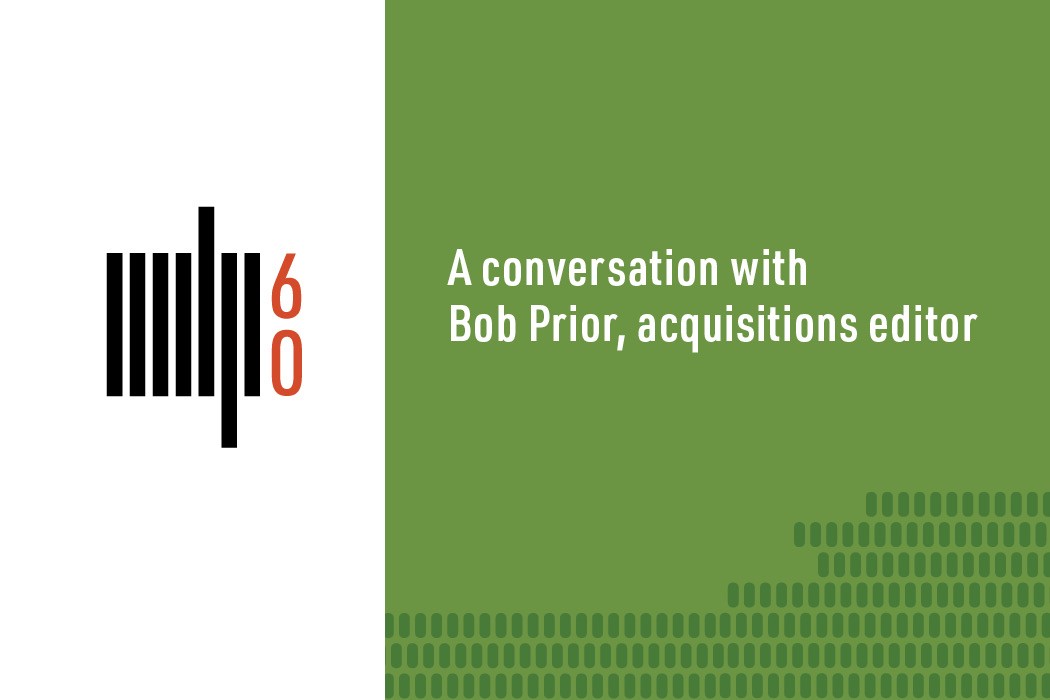 Bob Prior, executive acquisitions editor for our biomedical science, neuroscience, and trade science list, discusses his 30-plus years working at the Press

To celebrate 60 years of the Press, we are highlighting just a few of our long-time staff members, beginning with executive acquisitions editor Bob Prior.

During his 34 years at the MIT Press, Bob has published hundreds of trade and scholarly books in areas as diverse as Neuroscience, Computer Science, Natural History, Electronic Privacy, Evolution, and Design. He has even managed to sneak a novel into his list. He continues to seek out authors whose voices need to be heard  and whose books belong at MIT Press. His work is currently focused on general interest science books with an emphasis on the life sciences, neuroscience, and natural history.

Read our conversation with Bob below, and sign up for our newsletter to hear more about our 60th anniversary celebrations.

MIT Press: What roles have you held?

I started as a computer science editor. I signed the first new media title, Remediation by Jay David Bolter and Richard Grusin, which was then built into a fantastic list by Doug Sery; I’ve done a lot of work in design and trade science. In 2007 I took over what was once a sleepy neuroscience list and have been with the life sciences ever since. There’s a lot of creativity at the Press and a lot of opportunity to reach out in different directions. You don’t have to stay in a box.

Bob Prior: I’ve published over 600 books at MIT Press, and it’s very hard to pick just one—but if I had to, it would be a book called Robo sapiens by Peter Menzel and Faith D’Aluisio; it’s a book of photographs by a husband-and-wife team of photojournalists.

There’s a lot of reasons it’s one of my favorites. It was one of the first trade books I ever published and is a beautifully illustrated book. The authors have even become very close friends. That’s often the case with my favorite books; the authors become my friends. It’s another part of what I love about my job. Incidentally, we will be publishing their next book as well. It’s titled The End (don’t read too much into that!) and will be on the Fall 2024 list.

Bob Prior: Most of the time, my favorite memories come down to things that I have done with other people at the Press: a dinner in Australia with Susan Buckley and others; a conference in Japan with our sales representative at the time; driving around England with colleagues in a car filled with Americans who had no business driving on the English side of the road. My favorite memories involve people, not books.

But after a recent meeting, I was writing up notes on our upcoming acquisitions to share with director and publisher Amy Brand, editorial director Gita Manaktala, and sales director Bill Smith—and I thought to myself, “God, I am so lucky to work here.” The quality and the range of projects at the Press always amaze me. In our publishing committee meetings we might discuss computer science monographs, followed by In the Black Fantastic by Ekow Eshun, followed by what have you—and across all disciplines, the range and the quality of the work is just phenomenal. And in our backlist, too, I am always finding books that surprise and delight me.

Bob Prior: One of the books I’m proudest of having worked on is Ben Barres’ Autobiography of a Transgender Scientist. I knew Ben a little and had been in touch with him about the possibility of his writing a book on neuroscience. He came back to me and shared that he would love to, but wouldn’t be able to because he was ill—and then I learned that he had passed away.

We later discovered that Ben had, in the last months of his life, written an autobiography and donated the manuscript to the Society for Neuroscience. They licensed the manuscript to us, and so I edited his writing posthumously—which was very nerve wracking. I knew it was an incredibly personal story; he talks about his experiences being an undergrad at MIT, his transition, and the challenges of his life. I was dealing with something very sensitive, and throughout the editing process I couldn’t go back to him and ask, “can I make this change?”

It’s a book I am very proud of because of Ben’s legacy, because of the person he was, and because every person I know who has read it has been transformed by it in some way.

Bob Prior: Besides my own retirement?

About 20 years ago we published a book called History of Shit—and a reviewer said something about this book that I’ve always loved: “Those nerdy perverts at the MIT Press have done it again.” This quote sums us up quite beautifully, I think. We’re nerds; there’s no doubt about it. But still, there’s an edge here at the Press.

I hope that we will always continue to explore that edge, whatever it happens to be; whether it’s a topic that’s so new that you’re way ahead of the curve in publishing it; or whether it’s an area of a discipline that’s nontraditional, controversial, or something that other publishers might shy away from. In the next 60 years, I hope whoever follows in our footsteps will still be exploring these edges of scholarship and living up to our “nerdy perverts” label.