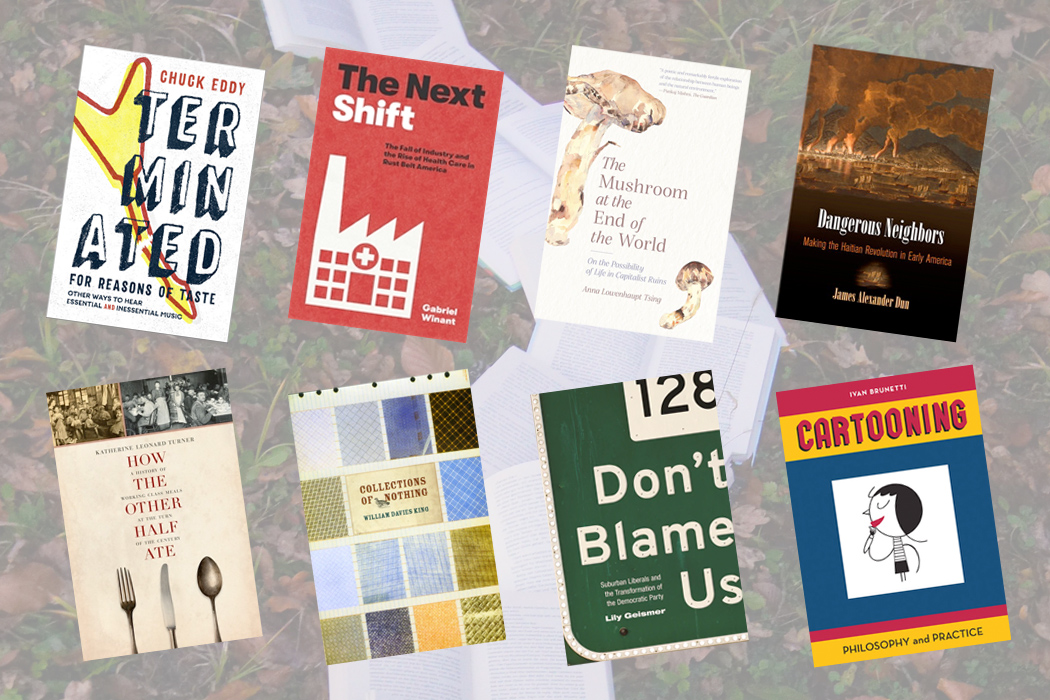 Jimmy Carter will be remembered as a Nobel Peace Prize winner, an advocate for civil rights, and a dark horse candidate who triumphed over Gerald Ford to become president in 1977. But his biggest contribution, if you ask us, is proclaiming a University Press Week “in recognition of the impact, both here and abroad, of American university presses on culture and scholarship.” Carter gets it. He’s the author of several university press-published books, after all.

This year for University Press Week, which the Association of University Presses revived and revamped in 2012, we’ve created a list of some of our favorite books from fellow university presses. Dig in, spread the word, and please support all of these wonderful authors and publishers. #ReadUP

Terminated for Reasons of Taste by veteran rock critic Chuck Eddy from Duke University Press, who argues that rock ‘n roll history is written by the winners.

I recently read Gabriel Winant’s The Next Shift, published by Harvard University Press and thought it was beautiful. In the book he documents the cascading effects of deindustrialization as they run through the institutions of the family, the factory and the hospital. It portrays a complexity often missing from depictions of the working class, specifically in the attention paid to how labor (both waged and unwaged) is aggregated across lines of gender and race.

I read Anna Lowenhaupt Tsing’s The Mushroom at the End of the World from Princeton University Press earlier this year and thoroughly appreciated the ways she weaves a story, through an ethnographic lens, of the influences of people and nature on each other locally and globally. The narratives, and their connections, are captivating. Reading a book that is appropriately seeking new ways to find hope and “possibility of life in capitalist ruins” (the book’s subtitle) during a pandemic was a needed salve.

Philadelphia Stories: People and Their Places in Early America by C. Dallett Hemphill, edited by Rodney Hessinger and Daniel K. Richter from the University of Pennsylvania Press, chronicling twelve of these lives to explore the city’s people and places from the colonial era to the years before the Civil War.

How the Other Half Ate: A History of Working-Class Meals at the Turn of the Century by Katherine Leonard Turner from the University of California Press, which reveals how working-class Americans had eating habits that were distinctly shaped by jobs, families, neighborhoods, and the tools, utilities, and size of their kitchens—along with their cultural heritage.

University of Texas Press has been absolutely killing it lately on the music front, including the recent Fangirls by Hannah Ewans and Glitter up the Dark by Sasha Effens, though I think Hanif Abdurraqib’s Go Ahead in the Rain: Notes to A Tribe Called Quest really got the ball rolling.

A favorite that comes to mind is Bugis Navigation by Gene Ammarell, a monograph from Yale Southeast Asia Studies. It’s an ethnographic study of the indigenous navigational knowledge and practices of a group of Bugis seafarers who reside in an island village located in the Flores Sea in Indonesia. Fantastic stuff. And only from a UP!

Collections of Nothing by William Davies King from University of Chicago Press. I read this book 10 years ago but still think about it often. On its face, it’s a meditation about the author’s unusual collections of mundane objects—toothpaste boxes (he has over 120 of them), cereal boxes (his “first literature”), coke bottles, cleaner labels, etc.—and the psychology of hoarding. At its core it’s a disarming memoir about King’s endless search for meaning.

A Deeper Blue: The Life and Music of Townes Van Zandt by Robert Earl Hardy, published by University of North Texas Press. My favorite songwriter, seen like never before. Sympathetic but balanced. Meticulously researched. An essential book for fans of TVZ.

As an alumna of the university AND the Press, I was thrilled to receive a copy of Ballad of an American: A Graphic Biography of Paul Robeson by Sharon Rudahl from Rutgers University Press. It has a place of pride on my shelf.

Starting mid-pandemic I found myself meandering various creative paths just for fun. A few different paths led me to a tiny, instructive little book called Cartooning: Philosophy and Practice by Ivan Brunetti, published by Yale University Press. Part syllabus, part manifesto, it is one of those books that is informative and inspiring even if you didn’t know you might have been interested in the topic. The writing is funny and the exercises are fun and provocative. The trim size, paper, and typography are carefully chosen and add to the experience of reading.