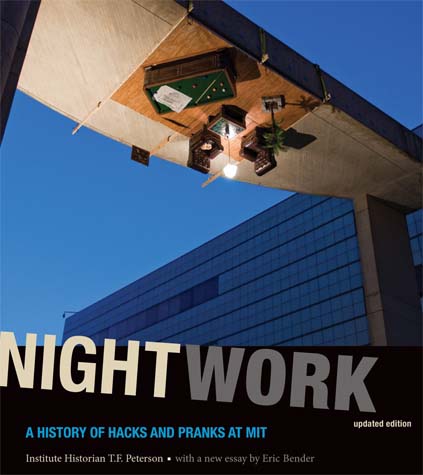 At MIT, practical jokes aren’t reserved for April Fools’ Day–students “hack” throughout the year. A “hack” is an ingenious, benign, and anonymous prank or practical joke, usually requiring engineering or scientific expertise and often pulled under the cover of darkness. Nick Montfort, author of several books, including Twisty Little Passages and 10 PRINT, and Associate Professor of Digital Media here at MIT, comments on the recent “Pac-Man and Blinky on the Great Dome” hack.

Here, hackers have unfurled the famous video game character Pac-Man. He seems to be eluding Blinky, the monster who is first out of the gate in the game, and to be happily proceeding away from Mass Ave toward a series of dots. Pac-Man’s plight, and his potential for success, can be imagined in terms of the challenge that the typical MIT student faces–not to consume power pellets, but to race around the maze of campus to submit problem sets in time.

While MIT is well-known for large-scale hacks, this hack recalls one that involved much smaller-scale tinkering. MIT students Kevin Curran, Steve Golson, Mike Horowitz, Doug Macrae, John Tylko, and Chris Rode of General Computer Company tried their hands at playing Pac-Man when it was released in the United States in late 1980. And, they also brought Pac-Man machines to campus. And, they decided to modify (or hack) Pac-Man to provide different behavior and more fun. The initial result was a game called Crazy Otto, of which only four were made. The modification was accomplished by adding a daughtercard to the Pac-Man board to provide randomness and a variety of different features that enhanced gameplay.

When Midway, the official Pac-Man licensee in the U.S., bought the rights to Crazy Otto, they decided to change its appearance so that it fit in with the Pac-Man family. The result was a similar-looking but significantly modified and improved game, Ms. Pac-Man–another famous MIT hack.

For more examples and images of MIT mischief, check out Nightwork: A History of Hacks and Pranks at MIT.