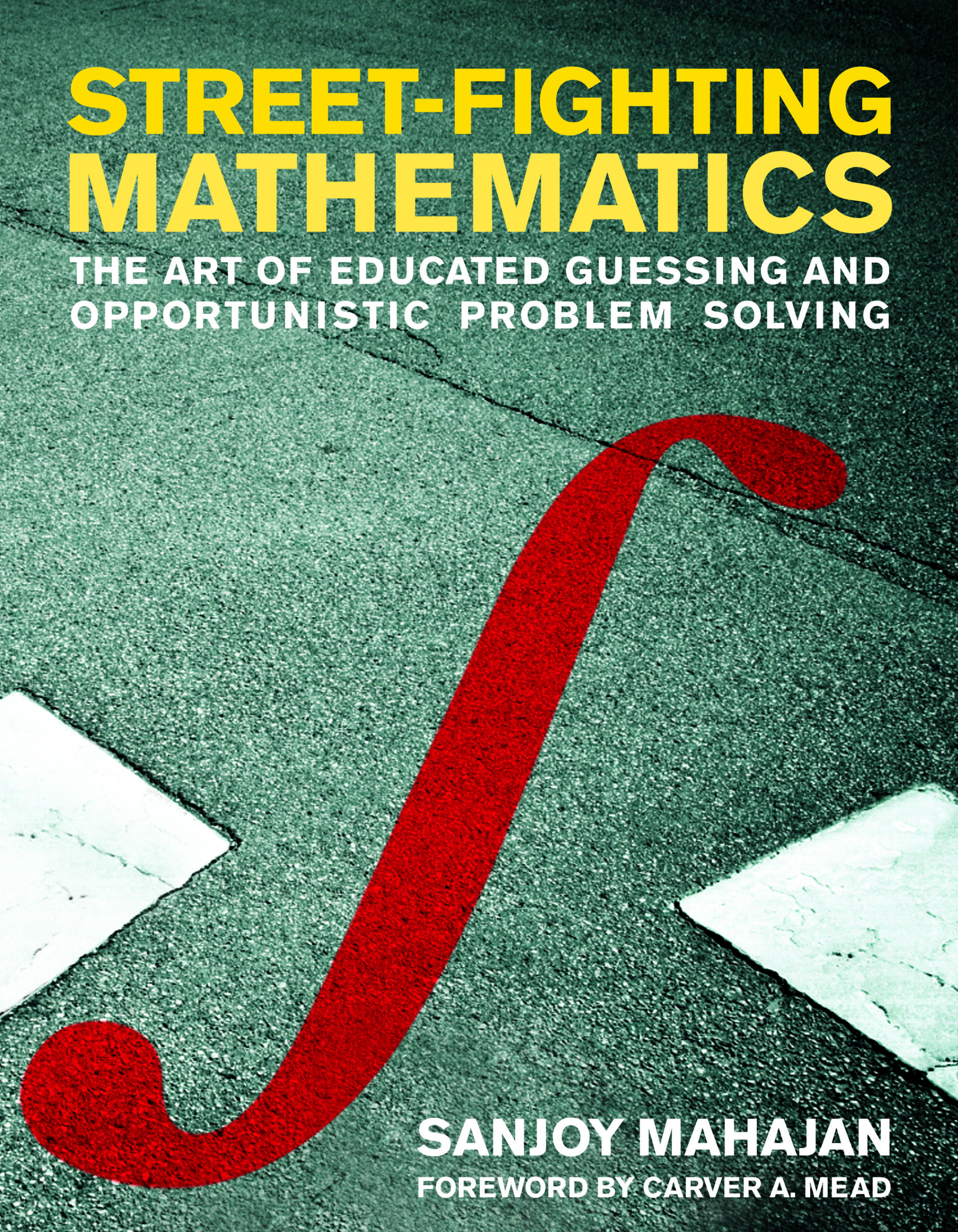 In honor of Pi day, here is a Q & A with Sanjoy Mahajan author of Street-Fighting Mathematics. Bonus: click this link to view the Creative Commons edition for free.

We are surrounded by technology that can do math for us such as cell phones, tablets, computers, and calculators. We’ve reached a point when people reach for one of these devices to do simple math rather than work it out in their heads. Has the proliferation of technology affected our ability to think for ourselves?

The proliferation has severely damaged our ability to think for ourselves.  Graphing calculators, for example, have done for students’ understanding of functions what ordinary calculators did for their understanding of arithmetic—that is to say, ruined it.  Knowing that a computer can do a calculation, and even knowing how to ask a computer to solve a problem, is psychologically very different from being able to solve the problem oneself, even or especially approximately.  For solving it oneself builds our intuition for the number system and for mathematical structures.

Good word problems can cultivate skills needed for the real-world problem solving, which include being able to make assumptions and estimates, to discard irrelevant information, and to resolve contradictory information.  Bad word problems, however, are much easier to write, and they mostly just teach students to hunt for trigger words—for example, “left” in “How many apples does he have left?” Understanding the situation and the mathematics isn’t needed at all.

In a blog post on Freakonomics, you discuss the issues with the way math, science, and languages are taught. What are the changes you would make so that students would have a better chance of retaining and understanding information?

Mathematics is a way of expressing relationships in the world: It is a language.  And we learn languages best through speaking meaningful sentences, long before we master all the grammar points in the sentence.

Thus, students have to use mathematics to model and draw conclusions about the world, rather than memorizing procedures, such as long division, best left to the pocket calculators.  As an example, teach calculus through physics.  Physics is why and how calculus was invented: to understand the motions in the heavens—not to compute the rate at which the water level rises when filling an upside down cone.

How do you work with a number like pi when making educated guesses? How many digits would you include to get the most accurate result?

Mostly I set pi to 3 and pi squared to 10.  Once in a while, I set pi to 6, so that the 4*pi/3 in the volume of a sphere becomes 8—which is equivalent to making everything a cube.  Thus, I never use more than one digit (the 3)—and sometimes even one digit is one too many.

What do you mean by “too much mathematical rigor teaches rigor mortis”?

Mathematics, especially in the last 150 years, has focused ever more on never making a mistake.  Perhaps the Weierstrass function started the downhill slide.  Discovered in 1872, it is a function continuous everywhere (has no jumps anywhere) yet differentiable nowhere (is spiky everywhere).  Its discovery contradicted the intuitions about calculus and functions upon which mathematicians and physicists had depended. The worry was that it was not the only counterexample.  And mathematics became ever more worried about not getting caught by a counterexample. Unfortunately, the surest way to never make a mistake is to never do anything.  The fear of mistakes is a recipe for paralysis—for rigor mortis.

What’s the meaning behind the title of your book Street-Fighting Mathematics?

In a street fight, no one cares how elegant your technique is.  What matters is: Did you do something useful?  Or did you simply stand there and get steamrolled?  A street-fighting attitude to problem solving is an antidote to rigor mortis.

Getting the right answer the first time guarantees a good grade, but with educated guessing there’s a high probability that you’re never going to get the exactly right answer. How hard is it to change a student’s way of thinking from concentrating on a good grade to figuring out a practical solution?

The longer a student has been in education, the harder it is to change the attitude.  First-year students, in return for the understanding and insight provided by approximations, quickly enjoy leaving the prison of precision.  Graduate students, selected for having done well in a system where precision is more important than understanding, are much more resistant.  The best solution is to teach flexible problem solving young.