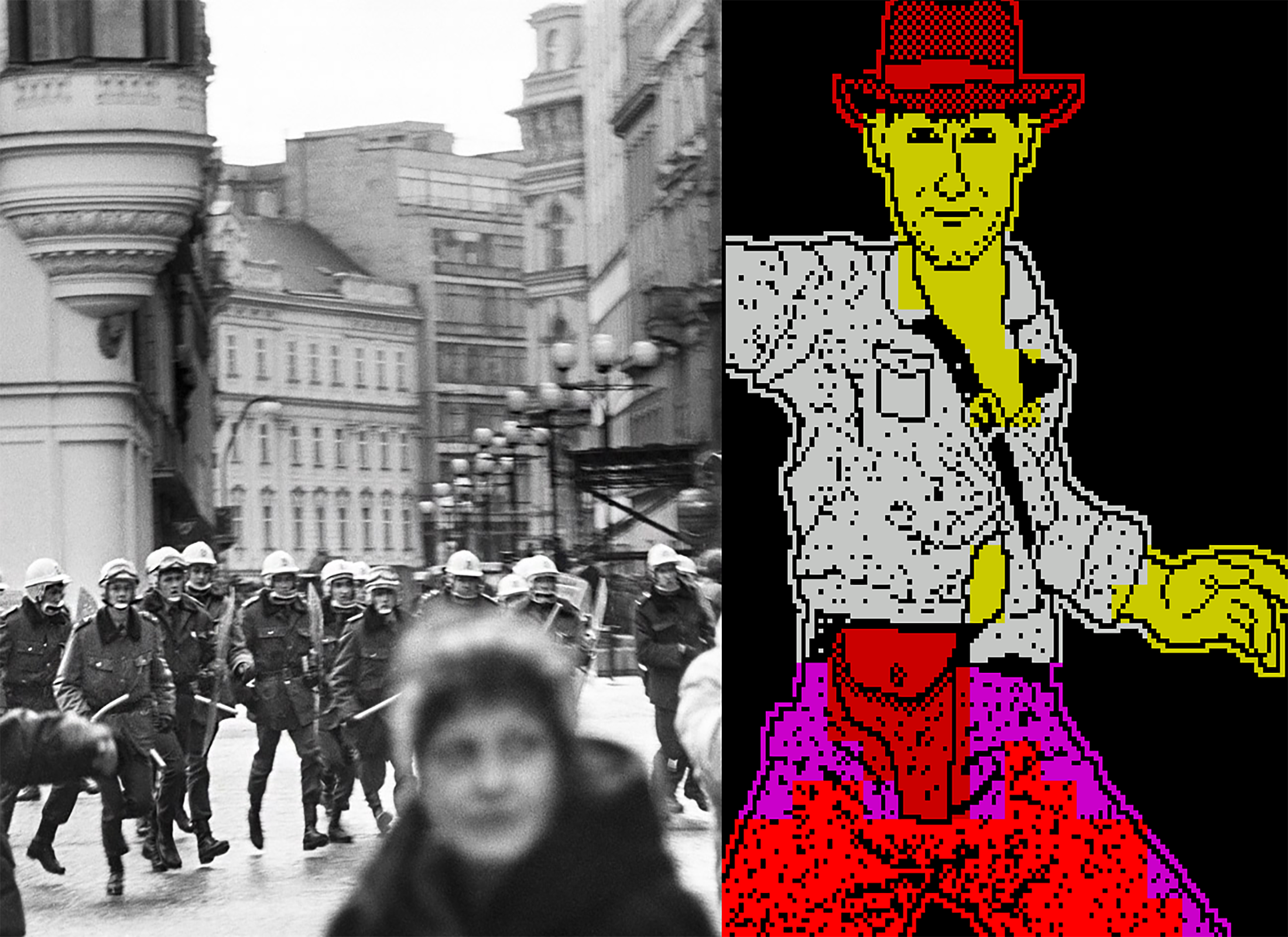 Thirty years ago, people gathered on Prague’s largest square to protest the oppressive regime of Communist Czechoslovakia. One of the earliest political computer games recreated the events with Indiana Jones as the main character. In the final chapter of Gaming the Iron Curtain, Jaroslav Švelch tells the story of this game and explains its background.

Prague’s Wenceslas Square is, in fact, a half-mile long boulevard in the center of the Czech capital, and a traditional site of public celebrations, protests, and demonstrations. On January 16, 1969, the square witnessed a stunning act of defiance against political oppression. Jan Palach, a 20-year-old student, set himself on fire to protest the public indifference to the Soviet occupation and the erosion of civic freedoms. Twenty years later, those freedoms were all but gone. Czechoslovakia was headed by one of the Soviet bloc’s most dogmatic and conservative regimes, and the country’s public life was strangled by censorship and secret police surveillance. But the opposition was still there, and—encouraged by the Perestroika reforms in the Soviet Union—it was becoming more and more courageous. On January 15, 1989, several dissident and opposition groups invited people to the Square to commemorate the twentieth anniversary of Palach’s sacrifice.

Citizens’ peaceful efforts to remember Palach were brutally suppressed by the police. Protesters were beaten up with batons and terrorized with tear gas and water cannons; many were arrested. Undeterred by the crackdown, people continued to gather for the following four days, and the string of demonstrations came to be known as the “Palach Week.” After a long period of more insidious oppression, the events marked the beginning of an open and public confrontation between the state and its citizens. While official news media tried to hush the events’ significance, they could not hide them altogether. As one of the main organizers reminisced twenty years later: “It was a breaking point because of the determination of the participants. And because the whole society noticed it.”

Among the responses to Palach Week demonstrations was a computer game, called The Adventures of Indiana Jones on Wenceslas Square in Prague on January 16, 1989. By then, computer games were a popular pastime among a growing group of hobbyists who were gathering in state-sponsored computer clubs. Supported by the government as a way of cheaply and efficiently educating programmers, the clubs were a haven for young, open-minded tech-savvy people who, in fact, held little respect for the political establishment. Their allegiance was with “cool” home computers and computer games, often smuggled from the West. They learned to write their own games, producing several text adventures starring heroes of Western popular culture, including Indiana Jones. In addition, they wrote games about their own lives or about the world around them—several of them engaging satirically with the Communist ideology and iconography.

Out of the surviving Czechoslovak “protest” games, Adventures of Indiana Jones on Wenceslas Square was perhaps the most acerbic and confrontational. The short but challenging text-only adventure puts the iconic Western hero in the shoes of a protester. The goal is to escape the square and return to “your homeland, America.” The game is aware of its absurd premise and builds on it with irony and hyperbole. While geographically faithful and attentive to detail, it portrays Wenceslas Square as a battlefield where every careless move is punished with death; where tear gas, water cannons, and policemen await on every corner. The game abounds with spectacular death scenes, which forefront and exaggerate police violence. One of them reads:

You are standing at an unobstructed entrance into the subway. As soon as you showed up, an officer came to you and searched you. Having found nothing, he called on his “comrades” and they beat you senseless. As they were running away to deal with some woman with a baby carriage, one of them lost a machete. You crawled for it and committed hara-kiri. INDIANA JONES IS DEAD.

Indy prevails by improvisation and unconventional methods, such as hurling stones and iron bars; in one of the most memorable scenes, he executes a policeman with an axe. The only gun in the game lacks ammunition and will cause more trouble than help. Rather than equipping weapons of those who represent power, Indy uses weapons of the streets. This not only makes for more interesting puzzles, but also clearly positions Indiana Jones as of one of the protesters.

Written for the Sinclair ZX Spectrum home computer, it spread among the user community on cassette tapes. In November 1989, it was followed by titles that chronicled the events of the Velvet Revolution and the demise of the Communist rule. Like all the protest games of the era, the Indiana Jones adventure was released anonymously, and the identity of its author remains unknown. Nevertheless, it is reasonable to hypothesize that its author was one of the young men and women who gathered on the square in January 1989. The mysterious programmer might have intended it as a simple, immediate reaction to the experience, expressed in a medium that was at hand. But for game history, it is one of the earliest examples of an activist computer game, and a remarkable one at that.

Adapted from Gaming The Iron Curtain: How Teenagers and Amateurs in Communist Czechoslovakia Claimed the Medium of Computer Games. You can visit the book’s companion website here.