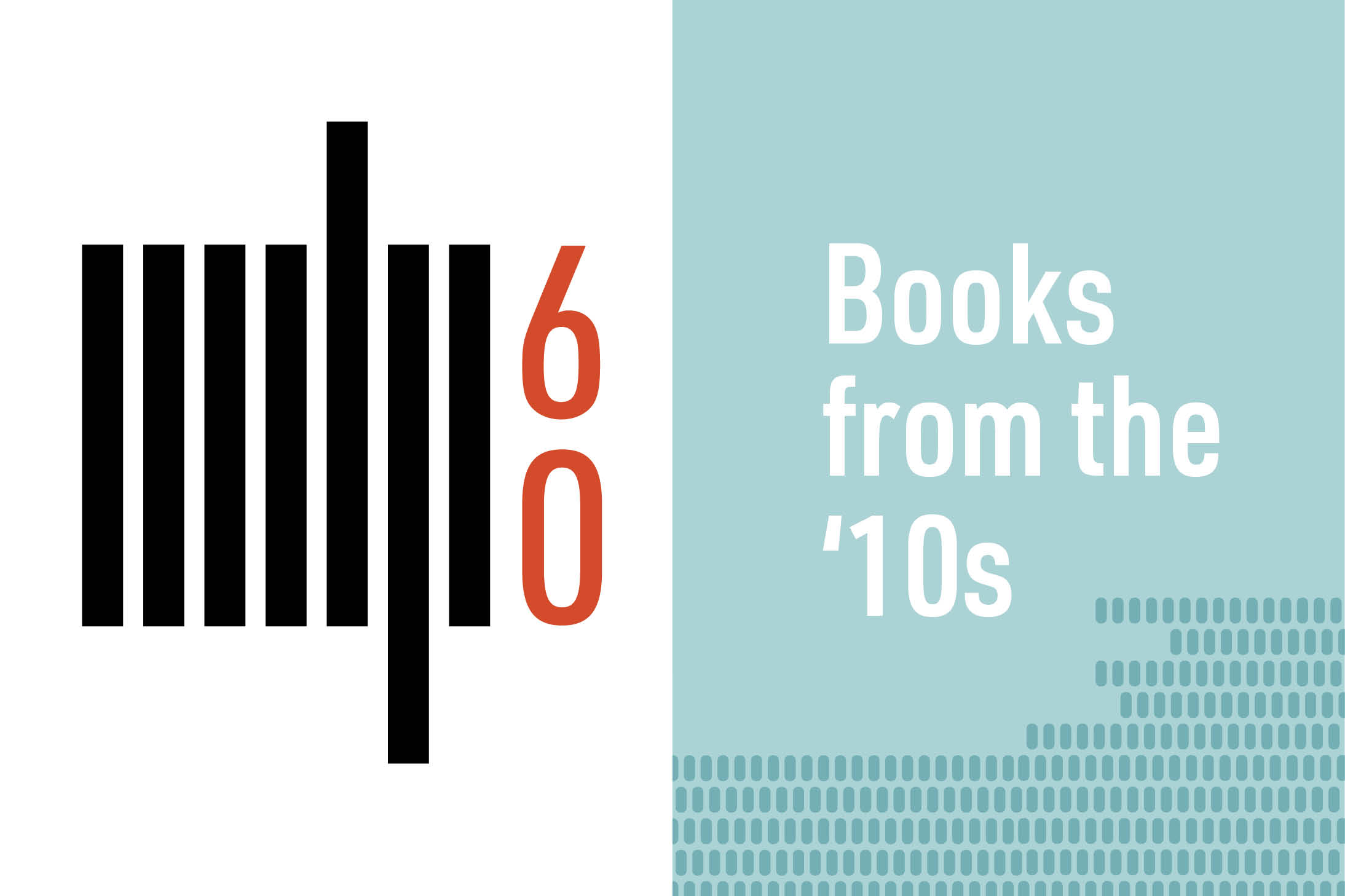 Our readers’ top picks from the 2010 MIT Press library

To celebrate the 60th anniversary of the MIT Press, we are highlighting key moments of our publishing history from the 1960s to present day—including our favorite book covers of the ‘60s and our staff’s favorite books from the ‘90s. Today we turn our attention to the 2010s.

Earlier this year we asked our followers on social media to share what they felt were our best books of the previous decade—and you delivered, dear readers. We received dozens of suggestions, from some of our best titles from the ongoing Essential Knowledge series to books on architecture or AI. Some of these books have entered the canon as modern classics; some have won numerous awards; some are just dang fun to read. But in all, we are honored to have published each and every one—especially if you consider them your favorites.

Read on to explore our readers’ favorite MIT Press books of the 2010s, or explore our 60th anniversary website to read well-wishes from friends and supporters of the Press.

Robots are entering the mainstream. Technologies have advanced to the point of mass commercialization—Roomba, for example—and adoption by governments—most notably, their use of drones. Meanwhile, these devices are being received by a public whose main sources of information about robots are the fantasies of popular culture. We know a lot about C-3PO and Robocop but not much about Atlas, Motoman, Kiva, or Beam—real-life robots that are reinventing warfare, the industrial workplace, and collaboration. In this book in the MIT Press Essential Knowledge series, technology analyst John Jordan offers an accessible and engaging introduction to robots and robotics, covering state-of-the-art applications, economic implications, and cultural context.

“Robots provides a great deal of insight and thought-provoking information for both the social scientist and the engineer.” —CHOICE

The Outer Limits of Reason: What Science, Mathematics, and Logic Cannot Tell Us by Noson S. Yanofsky (2013)

Many books explain what is known about the universe. This book investigates what cannot be known. Rather than exploring the amazing facts that science, mathematics, and reason have revealed to us, this work studies what science, mathematics, and reason tell us cannot be revealed. In The Outer Limits of Reason, Noson Yanofsky considers what cannot be predicted, described, or known, and what will never be understood. He discusses the limitations of computers, physics, logic, and our own intuitions about the world—our ideas about space, time, and motion, and the complex relationship between the knower and the known.

“Yanofsky provides an entertaining and informative whirlwind trip through limits on reason in language, formal logic, mathematics—and in science, the culmination of humankind’s attempts to reason about the world.” —The New Scientist

The Design Way: Intentional Change in an Unpredictable World by Harold G. Nelson and Erik Stolterman (2012)

Humans did not discover fire—they designed it. Design is not defined by software programs, blueprints, or font choice. When we create new things—technologies, organizations, processes, systems, environments, ways of thinking—we engage in design. With this expansive view of design as their premise, in The Design Way Harold Nelson and Erik Stolterman make the case for design as its own culture of inquiry and action. They offer not a recipe for design practice or theorizing but a formulation of design culture’s fundamental core of ideas. These ideas—which form “the design way”—are applicable to an infinite variety of design domains, from such traditional fields as architecture and graphic design to such nontraditional design areas as organizational, educational, interaction, and healthcare design.

“The most useful and enjoyable book on design that I have yet read.” —Roger Martin, University of Toronto

Combining formal argument with informal conversations and design proposals, Architecture at the Edge of Everything Else offers creative ideas for “thinking and acting architecture differently.” What makes the book unique (apart from its lively graphic format) is the freshness of its voices—young architects and emerging practitioners who for the most part have not published before. Interwoven with their proposals are conversations among these new voices and more established authors and practitioners, including Sanford Kwinter, Sylvia Lavin, K. Michael Hays, Philippe Rahm, Liam Gillick, Teddy Cruz, and Michael Meredith. Architecture at the Edge of Everything Else investigates the inner contradictions tangling and obscuring architectural discourse. It locates architecture in a cultural, social, political, and situational landscape—the space it actually occupies in the contemporary world.

“Architecture at the Edge reasserts the importance of situating architecture within broader cultural context, beyond appearance, programmatic requirements or ‘what the client wants.’” —Architectural Record

The Vanishing Middle Class: Prejudice and Power in a Dual Economy by Peter Temin (2017)

The United States is becoming a nation of rich and poor, with few families in the middle. In this book, MIT economist Peter Temin offers an illuminating way to look at the vanishing middle class. Temin argues that American history and politics, particularly slavery and its aftermath, play an important part in the widening gap between rich and poor. Temin employs a well-known, simple model of a dual economy to examine the dynamics of the rich/poor divide in America, and outlines ways to work toward greater equality so that America will no longer have one economy for the rich and one for the poor.

A Financial Times Best Book of 2017

“We are a divided nation economically and politically… Temin’s book tells us how the two parts of the modern dual economy can be glued back together.” —Claudia Goldin, Harvard University

You’ll See This Message When It Is Too Late: The Legal and Economic Aftermath of Cybersecurity Breaches by Josephine Wolff (2018)

Cybersecurity incidents make the news with startling regularity. Each breach—the theft of 145.5 million Americans’ information from Equifax, for example, or the Russian government’s theft of National Security Agency documents, or the Sony Pictures data dump—makes headlines, inspires panic, instigates lawsuits, and is then forgotten. The cycle of alarm and amnesia continues with the next attack, and the one after that. In this book, cybersecurity expert Josephine Wolff argues that we shouldn’t forget about these incidents, we should investigate their trajectory, from technology flaws to reparations for harm done to their impact on future security measures. We can learn valuable lessons in the aftermath of cybersecurity breaches.

“A must-read for anyone trying to understand how cybersecurity technology and policy play out in the real world.” —Bruce Schneier, author of Data and Goliath; Chief Technology Officer of IBM Resilient

One of the enduring concerns of moral philosophy is deciding who or what is deserving of ethical consideration. Much recent attention has been devoted to the “animal question”—consideration of the moral status of nonhuman animals. In this book, David Gunkel takes up the “machine question”: whether and to what extent intelligent and autonomous machines of our own making can be considered to have legitimate moral responsibilities and any legitimate claim to moral consideration. Technological advances may prompt us to wonder if the science fiction of computers and robots whose actions affect their human companions could become science fact. Gunkel’s argument promises to influence future considerations of ethics, ourselves, and the other entities who inhabit this world.

“A tour de force that largely succeeds in getting us to ‘think otherwise.’” —Ethics and Information Technology

In December 2012, the exuberant video “Gangnam Style” became the first YouTube clip to be viewed more than one billion times. Thousands of its viewers responded by creating and posting their own variations of the video—“Mitt Romney Style,” “NASA Johnson Style,” “Egyptian Style,” and many others. “Gangnam Style” (and its attendant parodies, imitations, and derivations) is one of the most famous examples of an Internet meme: a piece of digital content that spreads quickly around the web in various iterations and becomes a shared cultural experience. In this book in the MIT Press Essential Knowledge series, Limor Shifman investigates Internet memes and what they tell us about digital culture.

In the twenty-first-century digital world, virtual goods are sold for real money. Digital game players happily pay for avatars, power-ups, and other game items. But behind every virtual sale, there is a virtual economy, simple or complex. In this book, Vili Lehdonvirta and Edward Castronova introduce the basic concepts of economics into the game developer’s and game designer’s toolkits. They focus on virtual economies in digital games, but also touch on serious digital currencies such as Bitcoin as well as virtual economies that emerge in social media around points, likes, and followers. The theoretical emphasis is on elementary microeconomic theory, with some discussion of behavioral economics, macroeconomics, sociology of consumption, and other social science theories relevant to economic behavior.

“This penetrating yet accessible book shows the value of economic thinking for designing virtual worlds, and the value of those virtual worlds for understanding ours.” —Kevin Werbach, University of Pennsylvania; coauthor of For the Win

The Ancient Origins of Consciousness: How the Brain Created Experience by Todd E. Feinberg and Jon M. Mallatt (2016)

How is consciousness created? When did it first appear on Earth, and how did it evolve? What constitutes consciousness, and which animals can be said to be sentient? In this book, Todd Feinberg and Jon Mallatt draw on recent scientific findings to answer these questions—and to tackle the most fundamental question about the nature of consciousness: how does the material brain create subjective experience?

“A very level-headed, deeply informed, and magisterial approach to the neurobiological basis of consciousness.” —Christof Koch, author of Consciousness: Confessions of a Romantic Reductionist