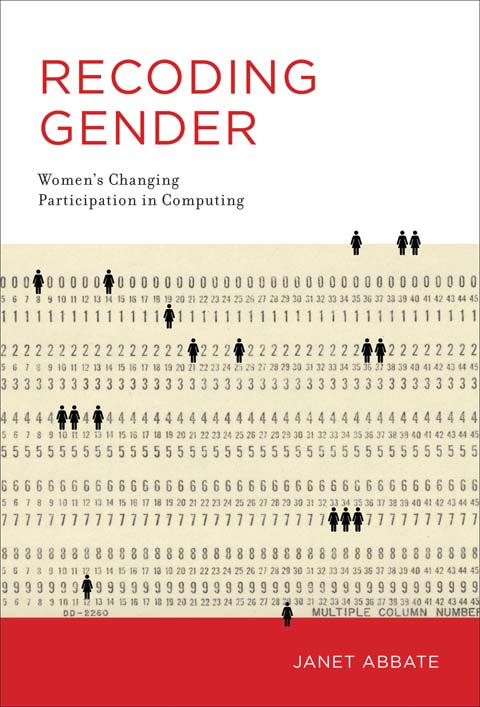 For our fourth  Women’s History Month post, we interviewed Janet Abbate, author of Recoding Gender: Women’s Changing Participation in Computing. Janet Abbate is Associate Professor of Science, Technology, and Society at Virginia Tech and is also the author of Inventing the Internet.

What most surprised you in your research on the history of women in computing?

I was surprised first of all by how many women had been active in the early decades of computing, given their invisibility in the historical record. Fortunately, that has changed with a recent wave of scholarship exploring gender in the history of computing. Another instance where my expectations were upended was when I interviewed women who started their careers in the 1950s: instead of describing computing as a stereotypically masculine field, they told me that programming at that time was considered “women’s work!”This underscored for me that notions of gender change over time, as does the nature of computing work. The fact that the image of a computer programmer or a computer scientist was in flux for several decades opened up opportunities for women. Today the masculine geek stereotype seems to have hardened, and I think that turns off many women (and men) who don’t fit the image. This may help explain another surprise: that the percentage of computer scientists and programmers who are women has actually declined since the mid-1980s, even as women have continued to make progress in other areas of science and engineering. Why? It’s a complex problem, but some of the answer lies in the current masculine image of computing, the increased difficulty of entering the field without formal technical credentials, and young women’s perception that computer work is incompatible with raising a family.

How did the dominant view of technology as a masculine field structure job recruitment processes in the 1950s?

It’s hard for us today to realize just how sex-segregated the job market was in the 1950s and ’60s. Before the civil rights laws of the 1960s, it was perfectly legal to openly discriminate against women in hiring, pay, and promotions. But less obvious—and still a problem today—were the structural obstacles that made women invisible to employers or inadequately qualified for technical jobs. For example, newspapers had separate classified sections for men’s jobs and women’s jobs, and the technical jobs were all listed in the men’s section. Jean Sammet described how she had to look in the men’s section, under Engineering, to find programming jobs. The fact that employers were willing to hire Sammet shows that the problem wasn’t just prejudice against women, it was a structural issue of: where do you run the ads so that women will actually see them? This is an issue that’s still relevant today: are IT recruiters going to where the women are?

Another problem had to do with educational preparation. In Britain, the secondary schools were single-sex during this period, and girls’ schools typically didn’t offer as much math and science as boys’ schools. It the US, it was more a matter of social pressure: in theory the girls could take technical subjects, but they knew it was considered weird for a girl to choose that. Also, teachers played an incredibly important role: almost every woman I interviewed had a story about a teacher who either encouraged her to consider a technical career or obstructed her from entering the sciences. I think teachers still play a crucial role in helping girls imagine themselves in technical careers. It’s not only a matter of learning the skills, it’s also gaining the confidence to claim technical expertise as part of your personal identity despite the gender stereotypes.

How did early female entrepreneurs overcome the gender stereotypes that prevailed in the 1960s?

One of my most fascinating discoveries when I was researching women’s achievements in computing was the parallel careers of Elsie Shut and Stephanie Shirley, who started their own software companies in the US and UK. This was at the very dawn of the software industry (1957 for Shut, 1962 for Shirley), and in addition to trying to compete in a very volatile industry, they were both trying to balance career and children. Independently, they came up with the same business model: to employ female programmers who wanted to work part-time at home while they raised their kids. At that time, telecommuting and part-time professional jobs were unheard of, so they were pioneers in every sense of the word; very courageous and creative women. The mainstream business world didn’t know what to make of them. Business Week did a story on Shutt in 1963 and described her firm as a bunch of “pregnant programmers,” while Stephanie Shirley started calling herself “Steve Shirley” so potential customers wouldn’t know she was a woman until she walked in the door to make her sales pitch! But their business model succeeded because they were able to tap the unused capacity of women who had great programming skills but couldn’t work full time.

These stories take on new meaning when thinking about the recent controversies over Yahoo CEO Marissa Mayer’s stance on telecommuting or Facebook COO Sheryl Sandberg’s recent book counseling women to “lean in” to their careers even if they want to have kids. The fact that we are still having these debates shows how little the US has progressed in making it possible for workers, male or female, to balance career and family. But I also think we could learn from Shutt and Shirley. They were able to succeed with a home-based workforce—and remember, this was before anyone had email!—but it took planning; it wasn’t an afterthought. They built their whole organizational strategy around the need to coordinate dispersed teams, and they developed tools and practices and a whole corporate culture around that.

I actually heard Sheryl Sandberg speak at the Grace Hopper Celebration of Women in Computing (a computer conference for women that I describe in my book), and I think her idea about “leaning in” has been widely misunderstood. Her point is that work-family balance is not going to be handed to you; you have to negotiate for it. In an ideal world we could take it for granted that employers would be flexible, but we don’t live in an ideal world. So her advice is to push ahead early in your career, take on high-profile assignments, and convince your employer that you’re valuable. That way, when you want to take more time for family, you’ll be in a position to negotiate for that, because your employer will have a stake in keeping you happy. I found the same thing in my interviews with women working in the 1950s and ’60s: once they had established themselves as skilled programmers, their employers were sometimes willing to accommodate them with unusual arrangements such as working from home. It was clear that the firms only made these concessions because they were desperate for people with scarce technical skills and these women had proved irreplaceable. So I think Sandberg is right, although it’s sad that we haven’t progressed further in fifty years. Obviously we need to work on changing workplace policies so that you don’t have to be a superstar in order to arrange a reasonable balance in your life.