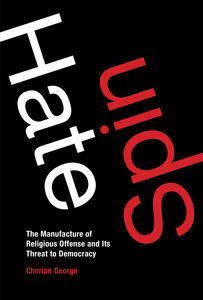 Repost Wednesday is a short series of guest-posts that will be featured on our blog periodically, highlighting some of the wonderful posts MIT Press authors have written about their books on other platforms. We hope you enjoy this series. In this post author Cherian George discusses hate speech and its effect domestically and internationally.

The tale of two places of worship, in the United States and Indonesia, suggests that fighting actual discrimination is more important than silencing hate speech.

The twenty-first century began with more nations than ever signed up for the democratic project. Today, though, one gets the gnawing sense that many communities did not read the fine print of that social contract.

Popular sovereignty only works when it includes the values of tolerance and mutual respect. That’s supposed to be part of the deal. But some groups are greedy for an exclusive say over their country’s direction. They claim people-power for themselves while suppressing other groups’ legitimate desire for dignity.

These groups’ hate speech afflicts new democracies like Myanmar, where the Rohingya minority teeters on extermination, as well as the oldest ones like the United States, where Donald Trump’s loutish presidential election campaign has polluted the country’s civic norms.

Open societies somehow need to preserve freedom of expression while protecting vulnerable groups from hate campaigns that rob them of their equal right to live in safety and worship as they believe.

I draw lessons from two long-running hate episodes from opposite sides of the planet. Around 2009, in the American state of Tennessee, local Muslims’ plan to build a mosque on the outskirts of Murfreesboro was vigorously opposed by rightwing bigots. Meantime, in Bogor, Indonesia, the Taman Yasmin Christian congregation’s attempts to worship at a new church building were fiercely resisted by hardline Muslim groups.

The Muslims of Murfreesboro were accused of being jihadist sympathisers intent on imposing Sharia on the United States. The Protestants of Bogor were alleged to be part of a grand conspiracy to Christianise Indonesia.

The misinformation was pushed by fringe groups, but their campaigns were potent enough to thwart the targeted communities’ legitimate desire to worship freely. The free marketplace of ideas allowed these lies and prejudices to flourish.

The first point to note, then, is that vulnerable minorities often need protection from hate speech – or, more precisely, expression that incites discrimination or violence by vilifying a group’s identity. Hate speech represents a kind of market failure in the exchange of ideas. The targeted group is unable to compete on equal terms because of its small size or other historical and cultural handicaps.

As with other market failures, hate speech may require public intervention, including, in some circumstances, legal prohibition. This principle is enshrined in international human rights law. Article 20 of the International Covenant on Civil and Political Rights (ICCPR) requires states to prohibit incitement to discrimination, hostility and violence.

A second core principle, however, is that less is more – states should not overreach. They must not censor expression that only offends people’s feelings, even if it insults their deeply held beliefs.

This, too, is in line with international human rights law. Article 19 of the ICCPR protects freedom of expression. While not absolute, this right would be meaningless if it did not cover expression of ideas that shock and offend some people. After all, if it did not outrage anyone, nobody would try to suppress it, and it would not need to be protected as a right.

This liberal free speech standard is sometimes portrayed as being at the expense of religion. This is not necessarily true. Banning religious offence can penalise religious groups as much as anyone else.

Laws against insult – like Indonesia’s blasphemy legislation or India’s statute against wounding religious feelings – may have been enacted to preserve social harmony, but they invariably backfire. They get coopted by hardline groups that deliberately take offence at books, videos, cartoons and places of worship, and then demand the laws against offence be enforced.

Thus, the coercive capacity of the state gets hijacked by the most intolerant groups. Instead of promoting respect for diversity, these laws encourage competing radical groups to express more and more outrage at things that are too different for their liking, as a political strategy to get attention and trigger legal action against their opponents. The most reasonable religious groups are sidelined by this dynamic, even though their self-restraint in the face of offence is exactly what society should encourage.

Numerous human rights monitors have observed that Indonesia’s blasphemy law has had this effect, emboldening hardline groups at the expense of religious minorities such as church-less Christian congregations as well as Muslim sects such as the Ahmadiyah.

My third point returns us to that story of the American mosque and the Indonesian church. It has a paradoxical conclusion.

The US Constitution’s firm free speech guarantees meant that the Muslims in Tennessee had virtually no protection against hate propaganda. Post-Reformasi Indonesia also enjoys great freedom of expression, but both incitement and offence are policed more strictly there than in the US.

The irony is that the Murfreesboro mosque that American hate groups vilified is today up and running; while the Taman Yasmin Christians in Indonesia are still waiting for local authorities to allow them to build their church. Every fortnight, you can find them worshipping in the open air at the National Monument Park, near the Presidential Palace.

This paradox is explained by the fact that although the US government is laissez faire about public discourse, it is highly interventionist in protecting religious equality. No matter how stridently local public opinion opposed the mosque, American courts were always going to stand by Muslims’ right to practice their faith. As the imam of the mosque told me simply, “The Constitution was on our side.”

In Indonesia and many other democracies, states are less resolute in protecting minority rights. Indonesia’s supreme court has ruled in favour of the Yasmin church, but the government has so far failed to enforce the judgment.

The lesson here is that, while we should take hate speech seriously, actions ultimately speak louder than words.

Unfortunately, many states are too eager to restrict questionable speech, and much too negligent in policing flagrantly discriminatory acts. We won’t get rid of intolerant groups that defame communities that are different. But we can insist that governments protect the substantive equality that citizens of a democracy have a right to expect.

This post originally appeared on the openDemocracy blog on 1st November 2016. Cherian George is the author of Hate Spin: The Manufacture of Religious Offense and its Threat to Democracy.