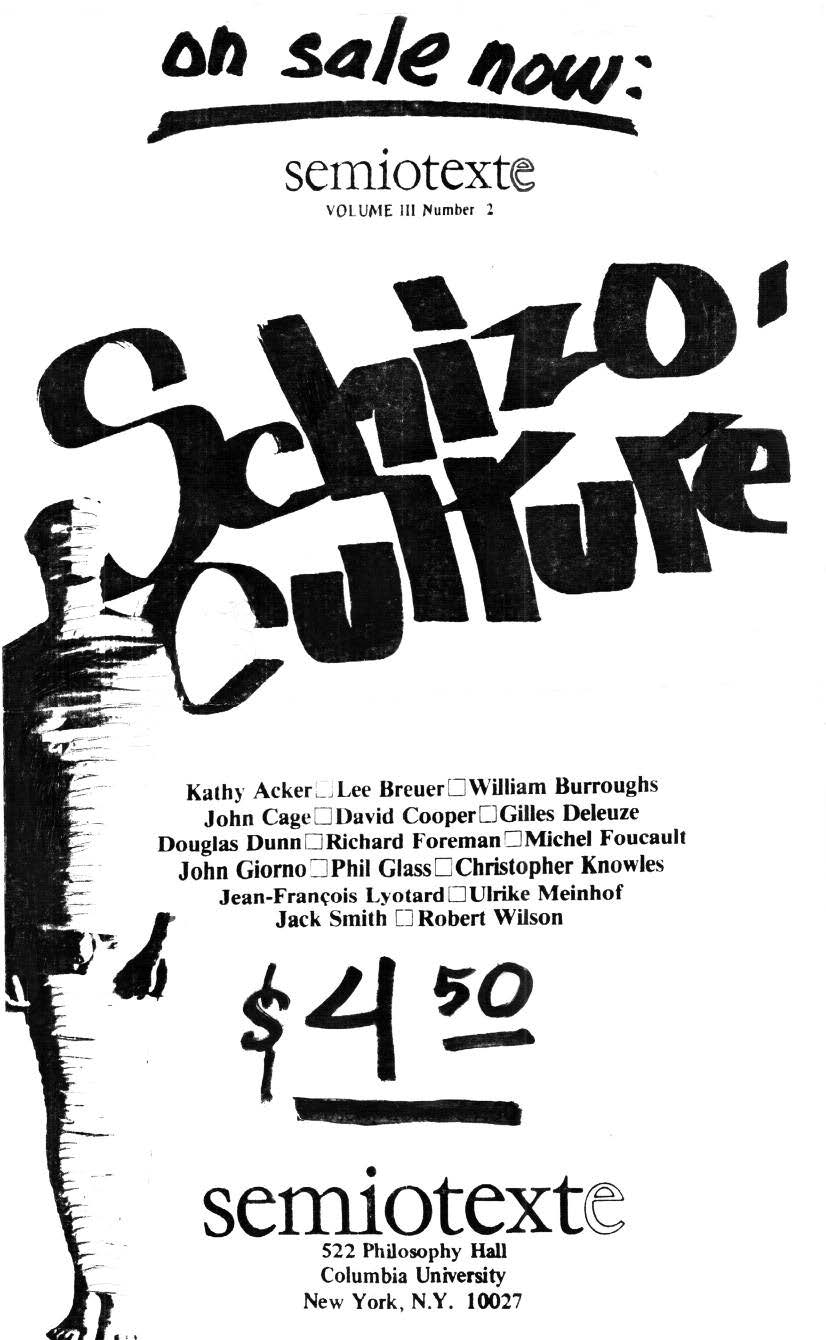 Associate Acquisitions Editor Marc Lowenthal guest blogs today to mark the anniversary of the “Schizo-Culture” conference that was held at Columbia University in 1975:

This week marks the 38th anniversary of the “Schizo-Culture” conference at Columbia University that took place over the long weekend of 13–16 November 1975: an event that effectively turned the Semiotext(e) journal into the “Semiotext(e)” entity as it is known today. There has always been a consistency in vision and intent with Semiotext(e), though, even when it had started out the previous year as a rather academic-looking journal, funded out-of-pocket by Sylvère Lotringer and the group of mostly graduate students forming its original board. As Maurizio Lazzarato states in his forthcoming book with Semiotext(e), Signs and Machines, if capitalism is to be effectively critiqued, it must be critiqued semiotically. His inspiration for saying so today was the same inspiration behind Semiotext(e)’s initial endeavors in the mid-1970s: the work of Michel Foucault and of the partnership of Gilles Deleuze and Félix Guattari.

It was the confluence of these two oeuvres that lay at the root of the 1975 “Schizo-Culture” conference: specifically, Foucault’s recent publication of Discipline and Punish and Deleuze and Guattari’s explosive 1972 book, Anti-Oedipus: Capitalism and Schizophrenia, neither of which had yet translated into English at that point. Prisons and Madness: into that thematic pairing that was to structure the event, Lotringer decided to throw in what he perceived to be the “last vestiges of the ’60s counterculture in America”—for him, most emblematized by John Cage and William S. Burroughs, both of whom agreed to attend. Jean-Francois Lyotard also came in to present a paper, as did R. D. Laing, whose ideas on anti-psychiatry were very influential at this point in time (see Guattari’s own 1972 essay on Laing’s importance, “Laing Divided,” in Chaosophy). Joining them were a number of more local scholars and some of the original Semiotext(e) members, who in the years to come would become very influential, such as John Rachjman, Denis Hollier, and the recently regretted Arthur C. Danto (the loss of whom was felt throughout the art world community last month).

As exciting as the line-up of guests was, what made the event move far beyond the academic confines and turn into more of a counter-cultural event was everyone else who attended: among the over 2,000 people who descended upon Columbia University that week was an incredible array of political radicals, ex-convicts, students, psychiatrists, Black Panthers, experimental theater groups (Richard Foreman was a strong presence), Marxists, Lyndon Larouchers (who had only recently transformed from radical Marxists into the crackpot conspiracy collective they are known as today), as well as patients from mental institutions, a number of whom had been diagnosed as being schizophrenic.

The results of this melting pot was explosive: one of the better-remembered quotes to emerge from the event was out of Foucault’s mouth, who uttered, as he surveyed the chaos unfolding before him: “This is the end of the sixties!” (Not as obvious a statement in 1975 as it might today seem today.) More importantly, though, it was also the real beginning of a new relevance for the field of humanities in the academe: the “schizo” rubric that was being applied to culture would turn out to be an essential mechanism to breaking down barriers between not just academic disciplines, but academe and everyday life: well into the 1980s and 1990s, the borders between everything from urban theory and literature, psychiatry and politics to semiotics and revolution or theater and therapy would be effectively (and productively) erased. And one of the major borders to come down, for which Semiotext(e) is often cited as an major dissolving agent, was the one between the Americans and the French; the turning-point for what has generally been called “French theory” in the US—as well as the ensuing explosion of the field of cultural studies in academic discourse—can be traced back to the “Schizo-Culture” event.

The performative and participatory nature of the event was such that it is even regarded in retrospect as something of a New York 1970s art happening: the exhibition currently up at the Whitney Museum through February 2 (“Rituals of Rented Island: Object Theater, Loft Performance, and the New Psychodrama—Manhattan, 1970–1980”) includes the “Schizo-Culture” conference among the performance works it considers from that era.

Incredibly enough, all of the documentation of this monumental event has remained buried in the Semiotext[e] archives (today housed at New York University) for close to four decades: lecture transcripts, papers, recordings, schizo-workshops, and public Q&As with such participants as William S. Burroughs. Lotringer and David Morris have sifted through all of this to compile the first publication to fully present Schizo-Culture to the reading public. Some of the ancillary details about the event described in the introduction and afterword are worth the price of admission alone: the verbal (and sometimes physical) sniping between a range of people, for example: Foucault and Laing confronted and accused by Lyndon Larouchers of being CIA agents; Deleuze and Guattari withdrawing from the commotion to the Chelsea Hotel and their subsequent US road trip (on which they would meet up with Bob Dylan, Joan Baez, Allen Ginsberg, and some Black Panthers); Guattari’s abrupt cancellation of a panel he was to chair (for reasons of “fascism”); etc. A particularly fascinating portion of the conference proves to be Lyotard’s presentation of his paper, “On the Strength of the Weak,” which was simultaneously translated into English as he went along, but in such a chaotic, disputed, and participatory manner that in reading it one has the sense of paying witness to the actual introduction of French theory into English, with all of its messy, mistranslated, confusing, emotional—yet ultimately fruitfully scintillating—paradoxes. These are the very minutes to the conference where America decided to embark upon its messy, glorious affair with French theory.

Schizo-Culture presents the 1975 event, but also includes the 1978 issue of Semiotext(e): Schizo-Culture, which is presented as an independent, facsimile volume in the two-volume slip-cased edition soon to be released. Though sharing the same title as the earlier event, the issue was almost a new endeavor altogether, with little to no overlap with the conference in terms of content (though with many of its participants carriying over into its table of contents); if the conference had been focused on prisons and madness, Schizo-Culture the issue was focused more on art and madness, as Semiotext(e) began setting roots into the New York art scene, and artists such as Denise Green and filmmaker Katheryn Bigelow became increasingly involved in assembling the journal issues.

But why set up a border between the issue and the event? Barriers are made to be broken down. Prisons, art, madness—or other institutions such as school, family, hospitals: “Schizo-Culture” was perhaps, if nothing else, a protest against all institutions (including the one that had hosted it back in 1975, which may be why Columbia University had not been pleased with the events of that week). This new, attractive, slipcased, double-volume edition belies the chaos contained within—the chaos that had been unleashed on an unsuspecting New York City almost four decades ago.