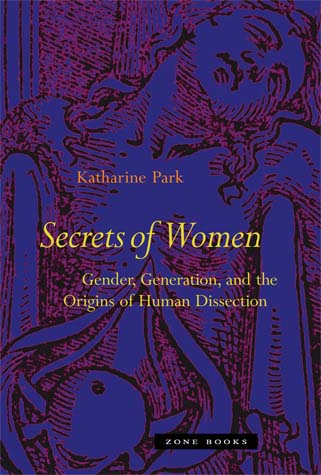 March is Women’s History Month. To celebrate, we’ll feature a few of our related titles each Friday through the end of the month. First up is an excerpt from Secrets of Women: Gender, Generation, and the Origins of Human Dissection by Katharine Park (Zone Books, 2006). Park’s book Wonders and the Order of Nature, 1150-1750 (Zone Books, 1998), coauthored with Lorraine Daston, won the Pfizer Prize for the best book in the history of science. Park is Zemurray Stone Radcliffe Professor of the History of Science at Harvard University.

It is difficult for twenty-first century readers to think of this understanding of the body as having had a beginning. Our culture is saturated with representations that naturalize it: advertisements that market everything from migraine pills to antacids using diagrams of internal organs; news programs demonstrate the latest technologies to open clogged arteries and repair defective heart valves with animated images of the relevant parts; we pass around ultrasound images of our fetuses and watch our colonoscopies in real time. But there is little evidence that Europeans before the mid-sixteenth century visualized their bodies’ functions and malfunctions in the same way—or indeed visualized them at all.

I have argued here that women’s bodies, as they came to be understood during the late Middle Ages and the Renaissance, played an important part in a new conception of the body as defined in part by its internal anatomy. The uterus was central to this development. Inspired by their reading of Galen and writers in the Galenic tradition, late thirteenth-century masters of medicine and surgery in northern Italian schools and universities began to see human anatomy as one of the principal foundations of medical knowledge; following Galen, they believed that this field was best mastered through autopsy and dissection; together with the reading of relevant texts. This idea was fueled and reinforced by new funerary and judicial practices, notably the increasing currency of embalming by evisceration and the use of postmortems to determine the causes of suspicious deaths. From the beginning, female bodies played an important part in this story, a fact that at first appears surprising, since Eve was created out of Adam and the male body was taken as the template for the human form.

If we look outside the setting of medical teaching to the world of practice, however, we find a host of contemporary texts and images that describe the opening of female bodies: the mothers of Caesar and Nero, holy women such as Chiara of Montefalco and Margherita of Città di Castello, and eventually the fifteenth–century Florentine matrons I describe in Chapter Three. Even in anatomical works by academic writers, the dissection of women received special emphasis, whereas male bodies were from the beginning described matter-of-factly. In such works, male interiors appear simultaneously as familiar and not particularly important for understanding the male self. In contrast, women’s bodies—described largely or entirely in terms of their reproductive functions—appear as puzzling and imperfectly known. What was the nature of the seed produced by the female testicles? Did each twin have its own placenta? How was it possible for the uterus to change size so radically during pregnancy? Did fetuses breathe and urinate in the womb? Answering these questions required exploring the insides of women’s bodies. Thus where the anatomies of men were mostly occasions for demonstrating familiar truths, the anatomies of women could provide opportunity for answering open questions. In this sense, the female reproductive organs became the exemplary object of dissection, demanding visual inspection in order to be known. Male writers used the trope of secrecy to describe this aspect of female identity: the fact that the process of generation took place deep inside the female body made it opaque not only to physicians and natural philosophers, but also to family and friends.