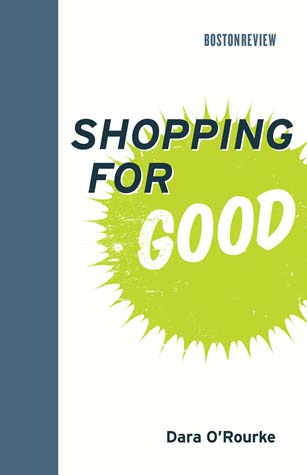 With the nation’s largest retailers planning to open up earlier than ever for Black Friday, many stores are anticipating the arrival of a record number of shoppers. This makes Black Friday the perfect time for people to “shop for good.”

In Shopping for Good, Dara O’Rourke, activist-scholar and co-founder and Chairman of GoodGuide.com, examines the idea that individuals, by voting with their wallets, can promote better labor conditions and environmental outcomes globally. Here’s an excerpt from the book:

Not only do consumers have clout, but they potentially fill an important gap as traditional state and intergovernmental regulation fails to ensure ethical manufacturing. Global production systems continue to challenge the capacities of states, international organizations such as the United Nations, and NGOs to curb labor and environmental exploitation and human rights violations. Complex cross-border transactions, rapid movement between suppliers, and limited transparency have made it virtually impossible for national governments to regulate global production. The U.S. government does not regulate the production methods of U.S. firms operating in other countries (in part because of WTO rules), and the Chinese government has shown little inclination and even less capacity to regulate companies such as Foxconn, which is now China’s largest private employer. NGOs, which are effective in advancing transparency and alerting consumers to problems in supply chains, are less able to monitor and enforce compliance with global standards and, aside from the threat of public exposure, lack mechanisms with which to incentivize supply-chain improvements.

Even in low-tech industries such as apparel, the supply chains linking the cotton fields of Uzbekistan, to weavers in Southeast Asia, to cut-and-sew operations in China have been more effectively influenced by consumer-focused campaigns than by national governments and international organizations. Consumers have directly targeted global brands, including Nike, Gap, and Levi’s. Similarly, in electronics, consumer campaigns in the United States and Europe have done more to focus on resource conflicts in Africa (particularly those surrounding tungsten, tin, and tantalum coming from the Congo), water pollution, and labor rights in China than have government initiatives. Even when governments regulate–as the U.S. government has via new reporting requirements after conflict minerals–they often do so only after the launch of consumer-focused campaigns.

Consumers thus emerge as a crucial point of leverage: they can provide muscle of NGOs by generating feedback that can harm sales of global brands, pressure companies to change suppliers or to demand improvements, and they can create market opportunities for “better” products…

Consumers, however, are mostly still sleeping and are rarely truly sovereign. We are often irrational and driven by habit, fear, and concern for status. But while consumers may not be the all-powerful citizens voting with their dollars that Beck and others hope for, we do have agency. And under certain conditions and given certain decisions, we can be reflective and sometimes even political.