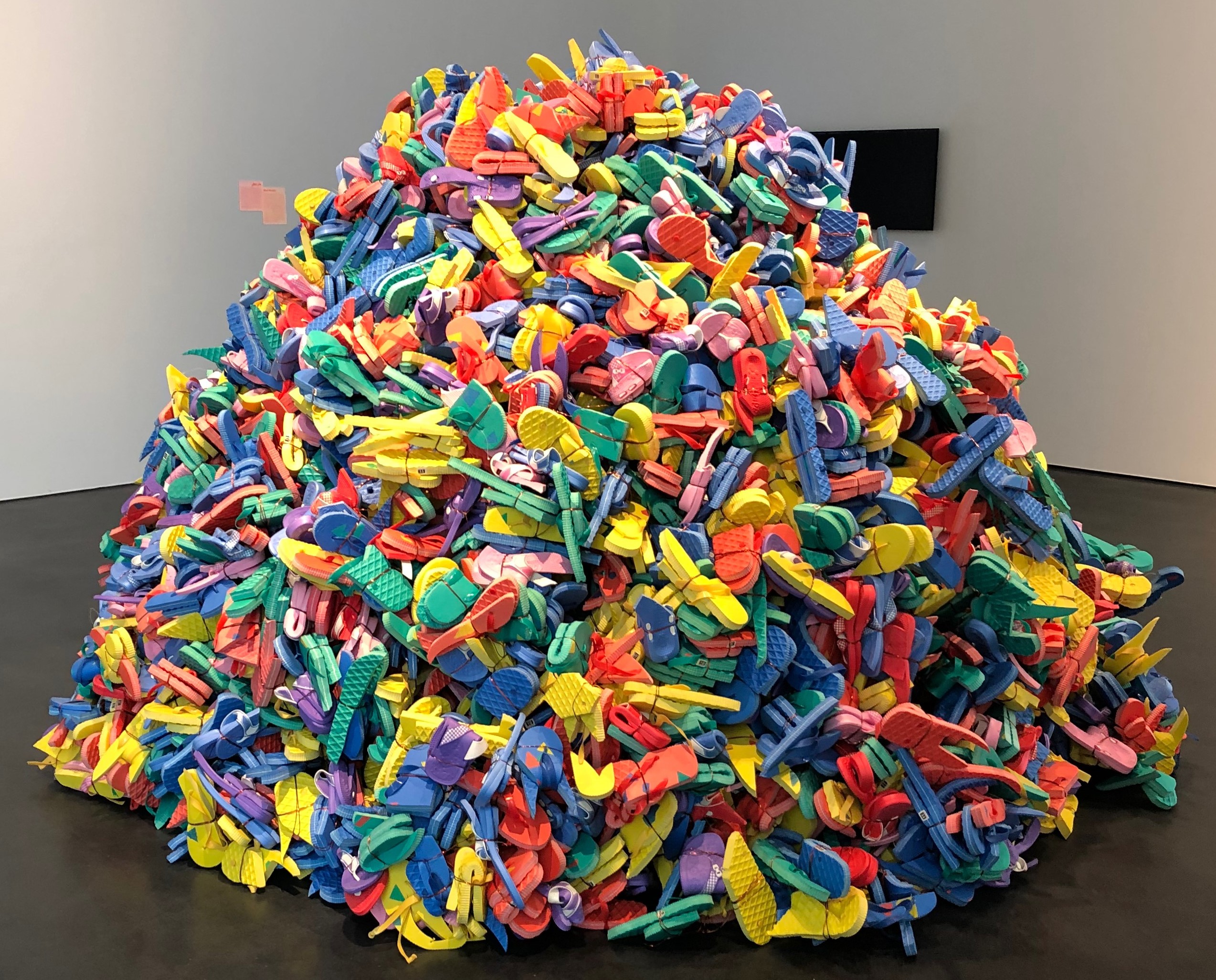 In Plastic Capitalism: Contemporary Art and the Drive to Waste, Amanda Boetzkes, professor of Contemporary Art History and Theory, School of Fine Arts and Music, University of Guelph, links the increasing visualization of waste in contemporary art to the rise of the global oil economy and the emergence of ecological thinking. Often, when art is analyzed in relation to the political, scientific, or ecological climate, it is considered merely illustrative. Boetzkes argues that art is constitutive of an ecological consciousness, not simply an extension of it. The visual culture of waste is central to the study of the ecological condition.

In the piece below, Boetzkes analyzes a new exhibition called Crude at the Jameel Art Center in Dubai.

At the Jameel Art Center in the thriving city of Dubai, I recently attended a symposium accompanying an exhibition called Crude curated by Murtaza Vali. The exhibition was animated by the stories, images, maps, and objects—essentially the fully materialized cultural imaginary—that accompany the global regime of oil. Crude revealed that oil is anything but a base substance; it is an energy and a vector, a force that organizes culture, labor, land, and lives. In fact, we might think of oil as the agent that denaturalizes the earth, rendering it purely economic in and through its command of cultural life. Crude brought a heightened attention to the full aesthetic and formal dimensions of oil: liquid black gold (thick, sleek and inviting); plastics (bright, colorful, contemporary); infrastructure (geometric, balanced, efficient).  But it also showed the oil economy in its excesses: archives of forgotten lives, polluted terrains and climates, the utopian visions turned dystopian reality.

It is this pivot between the global oil economy and its mobilization of the planet into a wasting world that concerns me in Plastic Capitalism. My central question is how we can understand the forces that govern the global oil economy in relation to the waste it produces. But I implicate this question in one that immediately follows: how does art understand the relationship between economy and waste? To consider economy and waste through the lens of art is to suggest the centrality of both the material and formal dimensions of global oil—not simply how art illustrates the cultural life of oil but how it integrates itself into its aesthetic logic in order to represent it. To my mind, art shows waste as an integral part of the drive of the oil economy—how the aesthetic dimensions of waste operationalize the economy. In other words, the effects of waste, both aesthetic and ecological, are active agents of global oil cultures and not simply their remains. Waste is exactly the way that the economy replicates itself as both a cultural form and an ecological predicament. Waste is the way the economy expresses itself while it entrenches itself as a material reality.

I write about this predicament as specifically plastic, though plastic is certainly not the only form of waste by which the economy expresses itself. Plastic, however, is an exemplary waste, given its origin as a petro-commodity that is chemically designed to be disposable. Its use-value lies in its waste-potential. But the ideal of plastic’s “wastability” is dependent on a myth that there is a space for such waste to go and be redeemed in a new profitable form. The reality that plastic is an indigestible and toxic excess perturbs the imaginary of the petro-regime. To look at plastic is to see the drive of the economy to engage in unmitigated and technologically sophisticated production and the profitability of its self-wasting as the underpinning of this drive. In plastic we see the economy’s paradoxical failure to waste as ecological disaster. Without real wasting (biodegradation, expenditure of energy, material spoilage) the economy simply spreads in malignant topologies, as it introjects industrial by-products into land, water, air, and living creatures. The petro-regime’s economic convictions that its waste is a miracle of production, its consumption is manageable, and its wastes can be recycled for profit are thrown into question by its very processes of wasting.

The transposability of plastic therefore has an unexplored dark side: not simply the fact that it is an artificial substance (a fundamental offense to the integrity of natural substances), nor the gluey muck, hard debris, and microscopic pellets gathering in gyres in oceans and rivers, though both of these are present realities. But more than this, plastic waste reveals the shadow of the petro-régime—that it is not a system at all but the antithesis of a system: the system’s circulation and self-organization as its own self-extermination.

Here is where art intervenes: while it incorporates waste and is therefore another symptom of the cultural imaginary of the global economy, it also repositions this waste for an alternative perspective on its entrenchment in a self-wasting economy. It projects a perspective on the economy’s excess at the intersection of its economic expression and its ecological perturbation. It reveals the affectively-charged commodities that once mediated social relations as accumulations that act upon us as a suffocating mesh. An example from the Crude exhibition stands out in this regard: one of the rooms was punctuated by a work called Slippers and Wire by Hassan Sharif. The work is a heap of fluorescent colored polymer sandals, piled high. With no feet to wear them and no more steps to take, Slippers and Wire is a bare form of the petro-regime’s crudity: its technological advancement and economic might have turned into a monstrous growth of waste that is unaccounted for, except in its aesthetic rendering.

Amanda Boetzkes is Professor of Contemporary Art History and Theory at the University of Guelph in Ontario, Canada, and the author of The Ethics of Earth Art. She was a Carson Fellow at the Rachel Carson Center for Environment and Society in Munich in 2017.