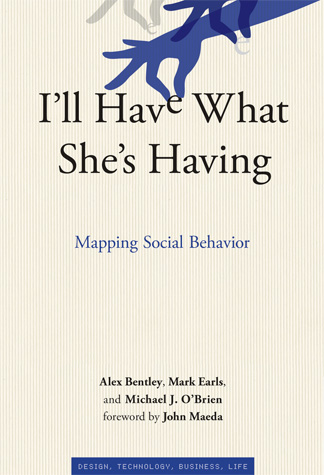 What does social learning have to do with presidential elections? Mark Earls, coauthor of I’ll Have What She’s Having, explains.

There are few things in the world that better evidence the importance of social learning—the I’ll Have What She’s Having (IHWSH) effect of our book of the same title—than democratic elections, particularly presidential elections. At the same time, they reveal our culture’s deep ambivalence about IHWSH and copying.

We tell ourselves that pursuing our democratic rights means each and every one of us having our own private say on who should be leading us and spending our tax dollars, but the lengths we go to in order to ensure that the votes we cast are indeed the votes of free and independently-minded individuals suggest that we suspect that human nature might be working in the other direction. Consider the privacy of the polling booth, the elaborate machinery we develop to reduce human error (and the complex human protocols to ensure there is none), the (debatable) limits on campaign expenditure, the labyrinthine procedural legal frameworks within which we manage the Great Big Vote.

Indeed, many countries go further: for example, the UK is one of those countries in which exit polls may not be published while the polls are still open. Germany and India are unlikely bedfellows, but both are tougher still—they have strict limits on the publication of opinion polls of any sort in the latter stages of elections.

And rightly so. Whether or not lawmakers behind this legal framework realized what they were doing, both of these types of banned information syntheses provide the rest of us with an example to follow—in uncertain decision-landscapes (as the jargon has it), they provide very good proxies for “what she’s having.”

Indeed, despite our best efforts, support for political parties and candidates is a very social phenomenon. Hence the heavy use in our politics of rallies (large gatherings of enthusiasts which give the impression of popularity), celebrity and VIP endorsements (former Presidents and Hollywood A-listers, please form an orderly line), and our obsession with the ever-elusive “momentum” that spin doctors seek for their candidate—momentum is a reflection of which way other people (including the media pundits) are shifting in their views and intentions. Again, a great shorthand for working out where to land your own vote.

Hence also the notion of “class” (i.e. group or tribal) politics and political views as a badge of shared social identity. Indeed, the depth of political divide, which the last few years in Washington has been characterized, is a reflection of a larger tribalization of opinions and culture across the US. As Bill Bishop’s excellent The Big Sort points out, we have sorted ourselves out into mutually misunderstanding and mistrusting electorates.

Another big clue to the importance of #IHWSH in shaping US politics is the clustering of opinions and positions around issues— Low Taxes, Small State, Gun Control, and Right to Life all seem to go together because they have come to reflect a group identity. Most discussions or debates on these issues immediately defaults to the preset position of those involved; sometimes, as Bishop points out, even encouraging a more extreme position thanks to what social psychologists call the “risky shift.”

Oscar Wilde was mostly right when he observed,“…most people are other people. Their thoughts are someone else’s opinions, their lives a mimicry, their passions a quotation.”

The difference between Oscar and us is that we don’t see this as essentially a bad thing (he despaired of the common man’s lack of originality). In our view, in politics as in life, IHWSH is large part of how we decide, when we’re left to our own individual—social—devices.