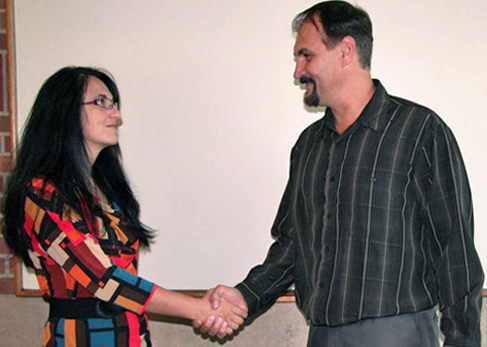 Can a handshake make or break a business deal? We talk to Sanda Dolcos (University of Illinois) about the science behind body language and brain activity for this month’s Spotlight on Science Q&A. Dolcos’ article, “The Power of a Handshake: Neural Correlates of Evaluative Judgments in Observed Social Interactions,” appeared in the December 2012 issue of the Journal of Cognitive Neuroscience. It has been referenced by Forbes and The Huffington Post and shared by tweeters from all around the world, including Saudi Arabia, Japan, Iceland, and Peru.

Dolcos and her coauthors investigate the neural correlates of observing social interactions in a business setting to explain how our brains evaluate nonverbal social interactions. Read the article for free through 31 October on our SOS page.

What sparked your interest in nonverbal social interactions?

Conventional wisdom suggests an important role of body language in evaluating other people`s actions and intentions. Especially when interacting with unknown others, for whom no relevant information is available, people rely heavily on body language as a cue to form impressions. Subtle cues conveyed through body language or physical touch, such as a handshake or a gentle touch on the shoulder, have been shown to lead to positive effects on behavior, reflected in increased feelings of security when making risky financial decisions or better evaluations and better tips. However, little was known about the impact of affective body language on behavioral evaluations in social settings and the associated neural correlates. Given the crucial role that body language plays in guiding everyday social interactions, and the limited evidence supporting it, we became interested in providing neuroscientific support for this important topic.

If you were to perform this experiment again today, what would you  do differently?

On the basis of previous evidence showing that physical contact with female hosts, such as handshake or gentle touch on the shoulder, may influence business related decisions, in our study all hosts were women. Although in North American culture (including in business and academic settings) a handshake is customary for both women and men when making new acquaintances, gender differences may exist in the initiation and use of handshake. Thus, it would have been interesting to also investigate this issue in male hosts. Although not implemented in our original study, this manipulation is now implemented in a follow-up study.

Hm… interesting question! One such story was related to the decision to take into consideration the interpersonal space. Everyone has a personal space or “bubble” around their body, which varies with context and culture. Thus, in designing the study, we made sure that the interpersonal distance between the social interaction partners was comfortable for our study participants. This was an important thing to consider because when someone steps too much into our personal space, even friendly approach interactions can be considered intruding.

We are currently expanding the investigation of the effects of body language by looking at the impact of ethnic group membership on the neural correlates of evaluating handshake and other nonverbal behaviors in social interactions with ingroup and outgroup individuals. We are also looking at the effects of social interactions on financial decisions, and are investigating the role of social contexts in their impact.

Read “The Power of a Handshake: Neural Correlates of Evaluative Judgments in Observed Social Interactions” for free through 31 October.