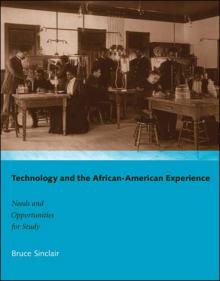 Our next post for Black History Month focuses on Technology and the African-American Experience, a collection of essays edited by Bruce Sinclair that examine the relationship between race and technology in American history.  Below are some more details on the book and an excerpt from an essay by Judith Carney, which demonstrates how essential West African slaves were to South Carolina’s lucrative rice plantation economy due to their knowledge and expertise of rice cultivation.

The collection of essays that make up Technology and the African-American Experience share a unifying goal: to unearth the many black American contributions to technology that have been passed over by America’s conventional historical record.  In the book’s preface, Editor Bruce Sinclair writes that “race and technology are two of the most powerful themes in American history,” and “that they have always been intertwined.”  With this notion in mind, the authors of each essay challenge the prevailing racial misconceptions that have informed American understanding of technology and history.  As Sinclair writes in the opening chapter, the book seeks to purge racial “perceptions about inventiveness” and “mental inferiority,” which date back to the days of slavery, noting America’s long-held “idea that technical competence was related to race.”

Notable among these essays is a study by Judith Carney, a professor of Geography at UCLA, which exhibits how essential African slaves were in establishing the techniques used by white plantation owners for rice cultivation in Georgia and South Carolina.  By 1860, these two states generated a vast majority of total U.S. rice production, with South Carolina accounting for an immense 63.6 percent of the total, according to Carney.  Such extensive rice cultivation created a highly wealthy planter aristocracy among South Carolina’s plantation owners.

But, as Carney asserts, African slaves have never been given enough credit for their skilled labor and acumen in helping to produce such a profitable economic system.  She writes:

The antecedents of the rice plantation economy date to the first century of South Carolina’s settlement (1670-1770), and especially to the decades prior to the 1739 Stono slave rebellion. Rice cultivation systems analogous to those in West Africa, using identical principles and devices for water control, were already evident in this period. Dramatic increases in slave imports during the eighteenth century facilitated the evolution and commoditization of the South Carolina rice economy.

By comparing techniques, irrigation systems, and agricultural practices in West Africa and America, Carney reveals the vital role African slaves played in fashioning such a lucrative and efficient method for cultivating rice in South Carolina.  Her research shows that, notions of white intellectual and technical superiority notwithstanding, blacks provided significant contributions to the development of complex farming procedures dating all the way back to the 17th century.  Despite their enslavement and a persistent lack of opportunity, these early African Americans remained adept at translating their skills and knowledge into successful agricultural practices.  Of course, the irony remains that the intelligence and ingenuity of these slaves generated an economic system in the South that exploited their very talents and abilities.