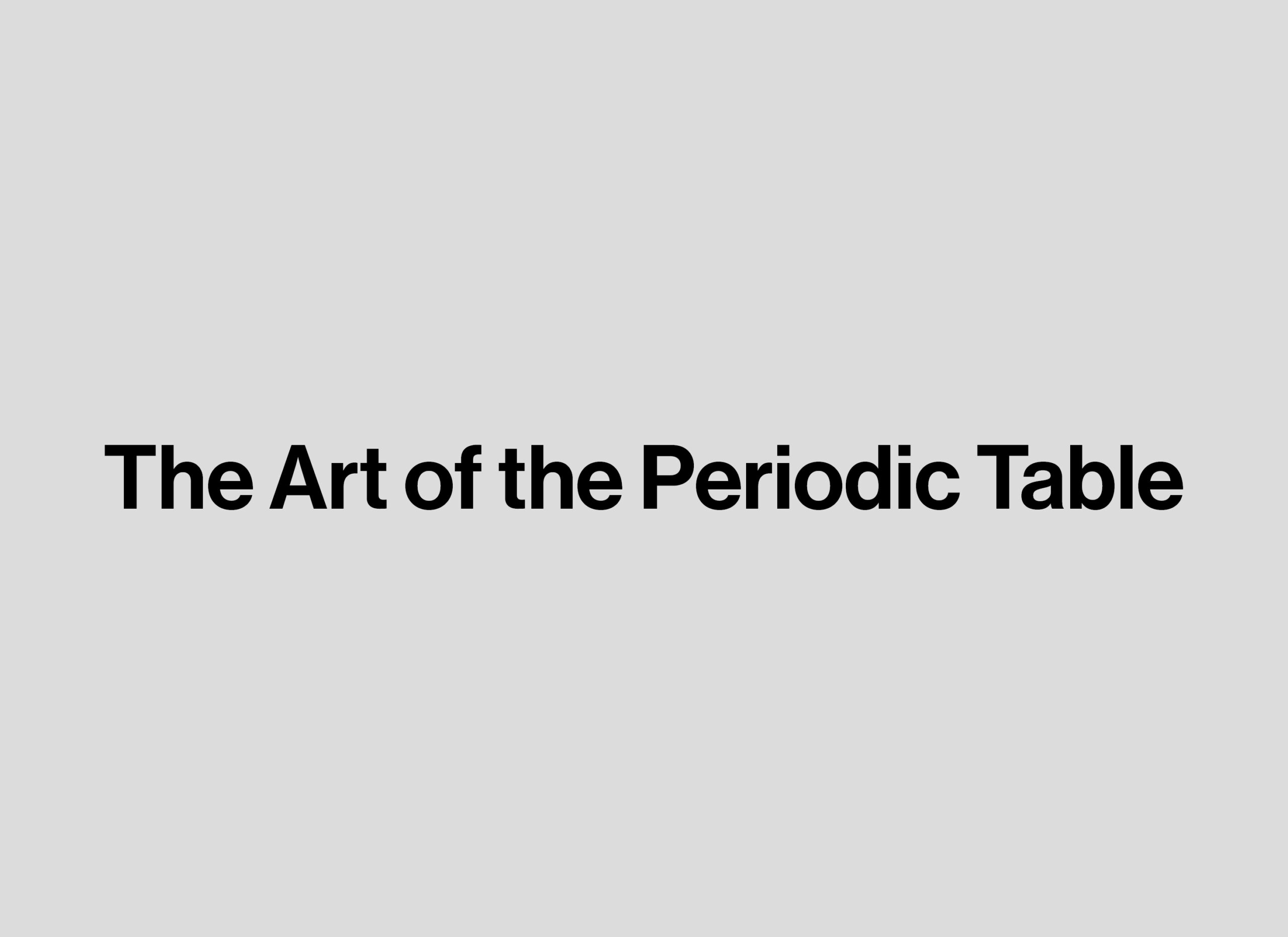 In celebration of Periodic Table Day on February 7th, we are sharing this adapted excerpt from the article “The Art of the Periodic Table” published in the June 2019 issue of Leonardo

Chemistry and art are traditionally segregated and often thought of as polar opposites. While art is seen as creative, expressive, and intuitive, chemistry is analytical, rigorous, and rational. Tami I. Spector thinks otherwise. She argues compellingly in her article, “The Art of the Periodic Table,” that the intersection of art and chemistry has the potential to build new insights, ideas, and processes beneficial to both subjects. The author explores a cross-disciplinary model of art criticism that illuminates the periodic table’s scientific innovation, and how it can be studied and understood from a visual level.

The Art of the Periodic Table

Among the artists who work with the periodic table, Blair Bradshaw paints works that most overtly reference aesthetic readymades. For example, like Johns’s Alphabets (1956), Bradshaw’s Periodic Table grids the entire canvas and fills virtually every grid box with stenciled atomic symbols overlaid on a ghostly background. Despite their formal similarities, the distinct subject materials of these two artists highlight the precise cultural currency the table holds for artists. Johns used numbers and letters because they provide manifolds that he didn’t have to “design,” ostensibly to give him “room to work on other levels.” As Johns narrates his motivations, his choice of subject was secondary to other concerns, including materiality, formality and objectivity. He was, he recounts, “interested in the . . . play between thinking, seeing, saying and nothing.” Obversely, Bradshaw’s iconic subject material lies among his primary concerns. He is “inspired by the organizing languages created by scientists” and transfixed by the “ability of the periodic table to represent such complicated ideas in such simple form.” While Johns sought to obliterate the semiotic associations of his sequential alphabets and numbers, often submerging them in grey and white paint almost to the point of illegibility, Bradshaw elevates the iconography of the periodic table, using its form to create visual-linguistic connections and rearranging and isolating the elements into clever wordplay. He foregrounds the elements through deviation, using recursion to reproduce the semantic building blocks of the material world; for Johns, “any relationship of lexical sense to the work in question is arbitrary or coincidental,” while for Bradshaw and other contemporary artists, the periodic table’s cultural associations, linguistic connotations and form are the focus.

Eric Scerri notes that for chemists “there is no one ‘best’ periodic table and that one’s choice depends on what particular aspect of periodicity of the elements one is most interested in depicting.” Formal analyses of artists’ renderings of the periodic table, however, indicate that they adhere predominately to the medium-long form of the table, also the most commonly used scientific form. The medium-long form foreshortens the table by placing the f-block elements 57–70 and 89–102 in separate rows below the rest of the table rather than inserting them according to their atomic numbers, yielding a table with 18 columns. Scientists validate this foreshortening of the table based on electron configuration, but the actual explanation is likely pedagogical: The long form is more “cumbersome” and adapts less well to wall charts. Thus, as we shift our attention from the formal constraints of the readymade to the form of the table itself, we find artistic orthodoxy conferred on the medium-long form.

Erich Füllgrabe’s Elemental Board and Keith Wilson’s Periodic Table exemplify this orthodoxy in two renditions of the table that at first glance appear disparate: Füllgrabe renders each element of his periodic table as an abstract painting in his examination of the means by which both chemists and artists “translate their individual experiences and experiments into visual presentations of results that considerably differ from their starting points;” Wilson’s massive three-dimensional grid of galvanized steel boxes “set[s] up connections between an extensive range of collected objects, from redundant machinery to logs and empty beer cases.” Yet despite the material and symbolic dissimilarities of these two renditions, their forms reiterate the medium-long form table.

Initially animated by the cosmology of Buddhist mandalas and stupas, seventeenth-century alchemical texts and Erdmann’s 1902 spiral periodic table, Kamen’s installation is in part made up of 83 elemental sculptures inspired by Boy Boer’s AtomFlowers. Boer’s unique version of the periodic table provides a two-dimensional, helicopter perspective of the valence electron shells of the atoms, built up like buttercups from each of the element’s overlapping orbitals—innovative, but still clinging in general outline to the medium-long form. Kamen transforms Boer’s elemental images into ethereal three-dimensional Mylar petals held up, petal above petal, on fiberglass wands. Kamen’s dimensional transformation illuminates Boer’s distinctive contribution to periodic table art, while departing altogether from the orthodoxy of the medium-long form table: For this table’s form, Kamen depends upon the Fibonacci Spiral. She thereby radically reinterprets the distribution of the elements, her table a hortus botanicus of forms, a legerdemain that reaches into the very roots from which the periodic table springs. In her words, she transforms “chemistry’s Periodic Table, a chart of letters and numbers, into a garden of sculptural elements based on geometry and atomic number” with a metaphysics that fittingly places atoms at the center and origin of the universe.

Read the full article “The Art of the Periodic Table” for free on our website throughout February 2021.