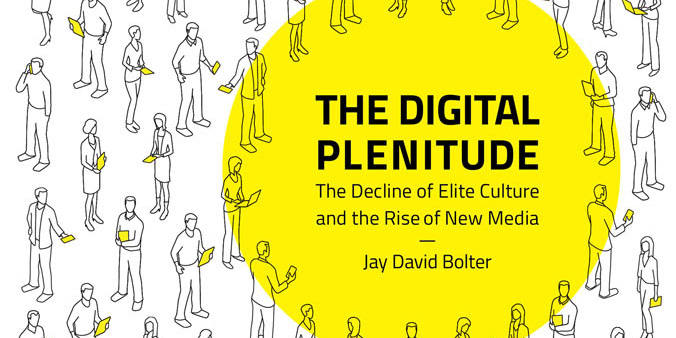 It is easy now to forget the optimism of the first decade of the World Wide Web and the expansion of the Internet. The first website went live in 1991. By the end of the 1990s, there were tens of thousands of sites and about 300 million users. Along with that exponential growth came the view that this new technology would democratize media, displacing old intellectual, social, and commercial hierarchies, allowing new voices to emerge, giving birth to new media forms. In 1996 John Perry Barlow, a founding member of the Electronic Frontier Foundation and lyricist for the Grateful Dead, wrote “A Declaration of the Independence of Cyberspace” and claimed that the Internet would be “a world where anyone, anywhere may express his or her beliefs, no matter how singular, without fear of being coerced into silence or conformity.”

Twenty years after that declaration, we no longer call it “cyberspace,” but web services have succeeded in making the means of cultural expression available to almost everyone in the developed world. Two billion-plus Facebook users can share their stories, photos, and concerns with hundreds of friends or with the whole digital world. More than 95 million photos and videos are uploaded to Instagram each day. 300 hours of YouTube videos are uploaded… per minute. By these measures, we are living in an era of unprecedented creative expression and communication, a plenitude that accommodates alternative voices alongside mainstream and commercial texts, images, videos, and podcasts.

But it turns out that plenitude is not necessarily the same thing as democracy. With the cacophony of voices in social media, the blogosphere, and podcast sites, our media landscape seems at times less like a democracy and more like an ochlocracy, like mob rule. Why? The fact is that today’s  digital media culture is incompatible with democratic free expression, at least as it has been defined by liberal thinking from the late eighteenth century to the late twentieth.

The ideal of free expression was intimately connected to the last dominant communications medium, printing. The age of print, especially the nineteenth century, was a period of increasing rates of literacy, a growing middle class with some leisure time, and the rise of newspapers and magazines to serve that audience of readers. These factors fostered a notion of liberal democracy as a marketplace of competing ideas and educated debate.

This ideal has not completely died even today. It is represented, for example, by the journalistic standards of newspapers like the New York Times—standards that newspapers also apply to their presence on the web. But this is a case of importing the standards of one media culture into another. Even John Perry Barlow, child of the 1960s though he is, is still thinking in these terms when he emphasizes that every individual should “express himself or herself” without “being coerced into conformity.” Barlow’s cyberspace has imported the democratic ideal of individualism from the age of print.

Print was and is a medium that values the individual, but digital media culture values what it defines (and what billions of users accept) as community. The vastness of the offerings on the Internet makes it impossible for any one of us to experience or even know about more than a tiny fraction. So we make choices. We subscribe to YouTube channels. We follow people and organizations on Twitter. We share links with Facebook friends. These habits and choices form us into virtual communities—not just the social networking and professional communities, like Facebook and LinkedIn, but also sites of common interest and affiliation. Reddit has 1.2 million communities called subreddits. On Tumblr’s website you are invited to “join millions of people in millions of communities across millions of #tags.” Subscribing, following, friending, retweeting—building virtual communities is the essence of today’s digital media culture.

Decades ago, Marshall McLuhan claimed that electronic technology would give birth to the global village. Perhaps television gave us one global village, but digital media today give us, hundreds of thousands or millions. And every one of these virtual villages becomes to some extent an echo chamber, as people grow committed to the common interest or to their fellow members. Virtual communities like physical communities often feel a strong need to defend their boundaries, to keep others out. Community members can work themselves into a frenzy when they feel threatened. The Incel subculture or the followers of QAnon are two notorious examples. If you don’t know the terms, check their Wikipedia articles and prepare to be amazed.

Racism, sexism, antisemitism, islamophobia—every form of intolerance on the left as well as the right finds expression through the same channels that allow people the opportunity for social sharing and amateur creativity.  What we need to acknowledge is that the benefits and drawbacks of this age of digital publication—the openness to amateur creativity, all forms of political expression, and minority voices on the one hand and the openness to all forms of hateful speech on the other—are inextricably “linked” (both in the popular and the technical senses of the word). They were built into the web and web services by their architects and programmers (who couldn’t have foreseen all of today’s ramifications) and subsequently ratified by billions of users.

For these users, the benefits of virtual communities outweigh the drawbacks, including the sacrifice of civility as well as privacy. Clearly we will have to find ways to control corporate and government collection and misuse of online data. There will also need to be efforts to regulate hate speech and online forms of communal hostility, especially when they threaten to spill into the physical world. But writers who engage with these problems (and who are often themselves committed to the paradigm of print culture) seem to assume that there is some way to have the best of both media cultures—to combine the openness and participation fostered (at least ideally) by digital media with the standards of reasoned debate and civil discourse fostered (at least ideally) by print. It is hard to imagine how these values can be reconciled.

Jay David Bolter is Wesley Chair of New Media and Codirector of the Augmented Media Lab at Georgia Institute of Technology. He is the author of The Digital Plenitude: The Decline of Elite Culture and the Rise of New Media.