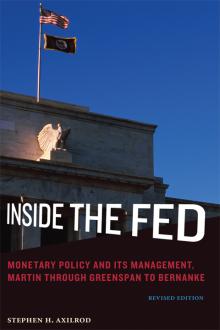 Today the Fed turns 100. On this day in 1913 President Woodrow Wilson signed the Federal Reserve Act that created the U.S. central banking system. To mark its centennial, here is an excerpt from Inside the Fed in which Stephen Axilrod reflects on the institution’s image and credibility over the years:

The Fed’s responsibilities, in addition to its widely publicized monetary policy operations, have encompassed such areas as the regulation and supervision of banks and bank holding companies, the protection of consumers in certain financial transactions, community investment and development, and the payments of settlements operations that undergird the banking system. They encompass locally and regionally important activities, carried out around the country by reserve banks and their branches (under regulations promulgated by the Board of Governors), and present the Fed in more of a “grass roots” context that can be, and usually has been, socially and politically beneficial for public understanding and support of the institution.

I believe the Fed retained a basic institutional credibility for much of the postwar period (not without vocal dissenters from one perspective or another). It was hurt for a time by the great inflation and the loss of monetary policy credibility, and restored more fully when inflation was conquered. But institutional credibility was more powerfully threatened by the more recent credit crisis. Public confidence in the Fed organization as a whole appeared to be shaken. Doubts, reflected in a considerable stirring of Congressional discontent, seemed to reach into the beating heart of the Fed as an institution, going beyond the usual credibility issues raised by difficult monetary policy judgments with which the national credit and equity markets have long been familiar.

The organization was perceived as remiss not only in failing to grasp the intense threat of the crisis early on but also in seeming to neglect many of the regulatory and rule-making areas that were, so it came to appear, involved with the growing credit problems. Questions were raised in the press and in the halls of Congress about the competence with which the Fed had dealt with, among others, emerging developments in the subprime mortgage market, the role played by off-balance sheet reporting and its implications for bank capital, and its responsibilities for certain consumer and mortgage credit protection functions.

Indeed, the fundamental question about how much regulatory responsibility should reside in the Fed was much debated during congressional deliberations of the proposed new financial legislation generated by the crisis. However…regulatory lapses were hardly particular to the Fed. They were endemic in the regulatory system as a whole, including other bank regulators and various authorities responsible for securities and commodity markets. And it will be some time, if ever, before any consensus is reached about the extent to which regulatory decisions and negligence, and whose, did or did not contribute to the intensity of the crisis.