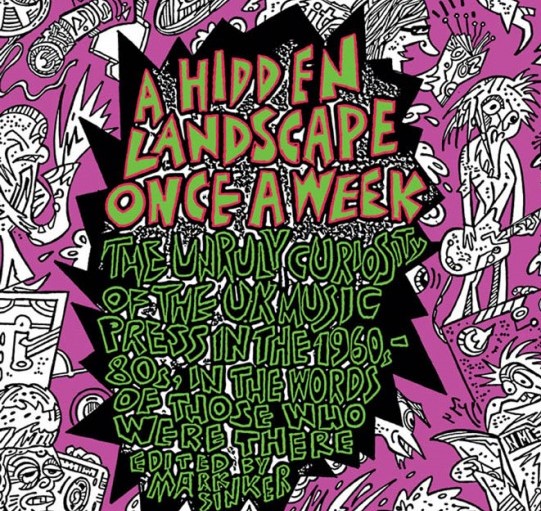 In A Hidden Landscape Once a Week: The Unruly Curiosity of the UK Music Press in the 1960s-80s in the words of those who were there (distributed for Strange Attractor Press), music journalist and former editor of The Wire magazine, Mark Sinker, offers an anthology of conversations and essays, memories, and commentary from the heyday of British pop music writing.

At its peak, from the 1960s to the 1980s, the UK music press was the forging ground for a new critical culture, where readers could encounter anything from comics and cult films to new musical forms and radical underground politics. It created an off-mainstream collective cultural commons improvised through a networked subculture of rival weeklies, monthlies, and fanzines, including such titles as NME, Melody Maker, Sounds , Record Mirror, Black Echoes, Black Music, Let It Rock, Street Life, Zigzag, and Smash Hits.

Below, Sinker gives a brief rundown of his background and the importance of the British music scene.

What is the book?

A Hidden Landscape Once a Week is a collection of essays and conversations about the UK music-press in the 1960s–80s—and about why they were so important to so many readers, the dreams and fears they imagined behind the music, how they came to be the way they were, how long they stayed that way, and what happened to change things.

An NME (New Musical Express) reader in the 1970s–80s, I was an NME writer 1983–88, then editor of The Wire 1992–94. I passed through all this with very strong opinions about how it should all work and why it wasn’t working any more—some of them possibly correct (hence how I ran The Wire when I was there). I saw everything as it happened, and even made a very tiny amount of it happen myself. So that’s who I am.

Why were the music papers important?

Obviously their main job was letting people—especially young people—know about music, new albums and songs, tours and so on. They were also full of many things you just didn’t find elsewhere at that time. Remember, we’re looking at a time before the internet, when routine access to anything but local culture was hard work. The music papers gave you glimpses of music from all over the world, and not just music—there was also film, comics, science fiction, radical politics, all kinds of layers of pop and semi-pop and avant-garde weirdness It was a fascinating map of the wider world, full of information you wouldn’t happen on by any other route, in the 1970s especially, and certainly not from TV or the grown-up papers—and it was opinionated and funny, and even a kind of a moral filter. It gave you an attitude to all this material—or actually several attitudes, as they jostled with one another to persuade you.

The readers that drove it, or many of them anyway, were full of curiosity about things beyond the ends of their own streets or gardens, about people outside their own cities or countries or continents even. This was a space that genuinely rewarded curiosity, that drew people into finding out more about matters they weren’t familiar with, and as a consequence more about themselves—and in some ways I think it was as unusual then as it would probably seem now.

Why revisit it now?

It’s fifty years and change since 1968, a peak moment of politicized youth culture, with anti-war marches and protests and its own underground newspapers arguing about different, better way to run the world. The book explores how much of this discussion ended up in the music press, alongside chart placings and tour dates and who was stepping out with who in the pop world. Those who took part—not least me—weren’t getting any younger, and I felt this story needed to be properly told before it was just too late.

This was the decade when rock culture and the politics of the underground magazines began to fuse into something new in the UK, largely as a reaction to the American black pop flooding into the UK after WW2. It found a large audience and a meaning, and youth culture began, however naïvely, to adopt a global perspective. All this was highly charged pop cultural territory, and much of it overlooked or anyway misunderstood by mainstream media. This is where the underground press came in—and a few years later, picking up the threads, the music papers — as a place where we could recreate the world from the ground up, starting with a shared love of pop and rock and jazz and soul and reggae and so on.

It’s a Golden Age/Silver Age thing, really. In the late 1980s, mainstream media—TV, the broadsheets, even the tabloids—swooped back in to cannibalize a great deal that the music-press had pioneered. From the start of the 1980s onwards, the countercultural unity, always argumentative, was finally fragmenting into targeted niche markets. For writers like me who found their feet in the late 1980s and the 1990s, there was very much a sense of a vanishing, vital time we’d arrived just too late for. At The Wire in the early 1990s I was trying to reanimate what had once mattered, as I saw it—the exciting crosstalk between all these different kinds of voices—and to counter the many things that had spoiled it, including this drive to division and genre separation. Others will certainly see it ending earlier or later, for other reasons—but this is the book I put together, so it’s shaped by my concerns.

What does it all mean today?

Two strange things seem to start happening at some point in the 1990s. First, of course, the internet began to flood us with new information night and day, in a frantic, rarely friendly torrent we can barely process. We live in a much more splintered and distrustful media environment now. But second, Western pop feels like it’s stalled—of course there are new stars, and some of them are great, but where new styles and fashions once flashed by, a new movement or trend every couple of years or so, today it feels as if we can’t escape the gravity of the 1990s; as if pop culture and rock sound somehow got stuck then. Among many other things, this book looks at what led up to the 1990s — with hints at what got lost that might have made a difference. How do we rebuild trust? And how do we get things on the move again as we do that?

Mark Sinker is a music writer, journalist, and former editor of The Wire magazine.